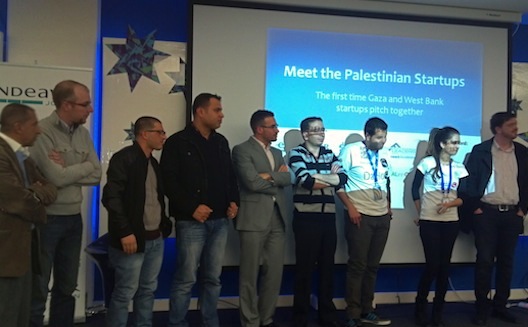 Until this past Thursday, startups in the West Bank and Gaza had not met under the same roof to pitch to investors.

At Oasis500 in Amman, however, eight of the most promising young Palestinian startups gathered to pitch their ideas before an intimate, crowded room of Jordan’s investors and supporters.  Sponsored by groups such as MercyCorps, Oasis500, and Endeavor, the event marked the first time that startups from the West Bank and Gaza met together under the same roof, despite interest on both sides in deepening exchange between the two ecosystems.

The event was designed to expose the Jordanian entrepreneurial community to the latest developments among their Palestinian counterparts, and to facilitate connections between investors and startups across the three locations.

As the event’s primary organizer, Montauk opened with an explanation of some of the unique challenges faced by Palestinian startups, which range from restrictions on mobility, to a small, fragmented market, to the high cost of living in the West Bank, and, in the case of Gaza, a shortage of investors and electricity.

Despite these challenges, there is considerable energy and enthusiasm among Palestine’s largely youthful startup community, she said.

This energy and excitement was palpable as each of the eight startups took turns presenting short, five-minute pitches. The mood in the room was light, and many of the startups joked about Palestine-specific challenges that they face. The bare-bones and universally well-executed pitches gave spectators a general overview of the startup’s concept, its current development status, and proposed revenue streams.

Social Dice is a startup aiming to streamline the hiring process by providing end-to-end solutions that cut time and costs, and optimize results via a social-media screening system.

In a similar vein, Fariqak is a beta-stage fantasy sports platform that allows users to build their own football team, with which they can compete against online opponents.

e-Jameya is an online platform that facilitates the acquisition of interest-free loans for Muslims by digitizing the traditional concept of the jameya – a communal finance system in which association members contribute a designated amount of money each month to a collective pot, which is then collected by individual members on rotating basis, thus allowing each member, over time, to contribute and collect equal sums.

Fadfid – Arabic for “to vent” or “to get something off your chest” – is attempting to diffuse the stigma associated with psychological therapy in the Middle East, by connecting patients with therapists on an online, and thus private, platform.

DWBI Solutions is a database intelligence startup that aims to facilitate the decision-making process for top-level corporate management by extracting and cleaning data from the various branches of its company, and then generating statistical reports, which are then integrated with an intelligence portal.

The final startup, Zoorna, is attempting to strengthen online tourism in the region by allowing prospective tourists to customize travel itineraries on a digital platform based on their interests.

For the startups, it wasn't just an opportunity to pitch, but also an opportunity to connect with each other. “It [the connection of West Bank and Gaza startups] is something new, it’s amazing. I’m seeing new things from Gaza that I’ve never seen before,” said Hamzeh Kirresh, Store-E’s project manager, who hails from Jerusalem. “From the pitches tonight, I can say that they’re not just simple startups. They actually are going somewhere, they have a future, all of them, and I’m not just saying that because I’m one of them. They’re very good ideas.”