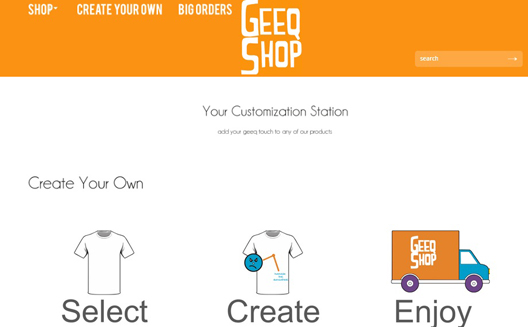 Every entrepreneur wants to wear a t-shirt with her company’s logo, and leave messages on personalized sticky notes, right? But especially in the Arab region (and especially in Egypt), it can be hard to organize the printing of such items, as quality, cost, and logistics can vary widely.

In order to provide a solution to this problem, Geeq Shop electronic printing house in Egypt has made it possible to print anything from the computer from your desk, without contacting anyone for assistance. You can download from the website the image you would like to print, type text, select the font, size, color, and add any other order. Within 24 hours, a test version of the printed product is sent to your email for feedback; once approved, the full order is sent the next day to the specified address. The website allows the user to check the selected model immediately upon entering the specifications and change it as he pleases, saving him a lot of time.

The Geeq Shop website offers a variety of products including mugs, t-shirts, water bottles, plates, phones, and computer covers and cases, providing the possibility of printing an institution logo, a photograph, or text.

The shop became popular in 2013 by promoting certain products such as t-shirts printed with political phrases, reflecting the politicized atmosphere of that time, in addition to other Arabic words and expressions referring to of-the-minute Egyptian cultural phenomena. These products were showcased in foreign schools in Cairo, as well as some malls and major conferences.

While Tamer and his partner Bilal Eid personally go for provocative slogans like those used by Bassem Youssef in his famous political satire program, considered by some to be excessively suggestive, and by others to be slang. The beauty of Geeq Shop is that the public can come up with their own creations, allowing anyone to create their own personal brand.

“Currently, the Egyptian market is a golden opportunity for first movers,” says Tamer. Tamer himself learned the basics of programming in order to design the Geeq Shop site himself. Just one month after Geeq Shop’s launch, Tamer left his full-time job to devote himself to his project, going so far as to deliver orders to customers’ homes with his partner Bilal at the beginning.

“Customization is the key”

Tamer and Bilal’s policy is to allow their customers unlimited creativity in coming up with their designs. When they stopped releasing set designs, and allowed customers to come up with their own, they started getting more business. The online store has since begun handling staff uniforms for some restaurants, contracting companies, telecommunication companies, graduation ceremonies in schools, and gym uniforms.

In spite of the large number of individual orders, company orders give Geeq Shop more stability due to the size of the orders and the high probability of another order if the client is satisfied by the first. As a result, the company focuses more on corporate orders more than individual ones. Also, last summer, it re-launched its ‘express yourself in a single product’ service, after the company bought a different machine to print individual orders.

Geeq Shop might also help you solve the supplier problem, because, conveniently, Tamer’s father owns a printing house and his cousin a garment factory. With these industries supporting the project, Geeq Shop started making profits after only one month, according to Tamer.

This January was the first anniversary of the customized printing service; so far mugs have been the most popular, followed by t-shirts and pillows. Throughout the year, 15 companies have worked with Geeq Shop, with an average demand of 300 t-shirts per month.

In light of the expected expansion over the coming year, Tamer also aspires to expand regionally so that the Arab world becomes one single market that gathers designers and buyers.