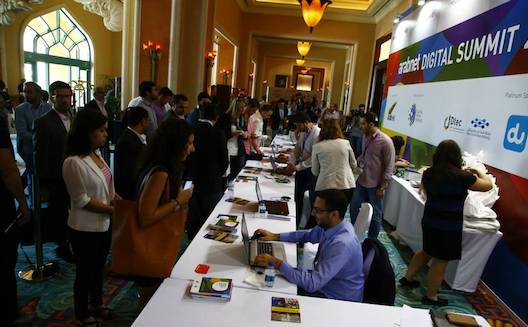 Over three days, from June 3 to 5, more than 110 speakers and 90 partners and sponsors met at the Atlantis Hotel in Dubai for the Arabnet Digital Summit 2014, organized for the second time in Dubai and for the fifth time in the Arab region.

Omar Christidis, the founder and CEO of Arabnet, said that the technology sector is witnessing significant growth, due in particular to a rapid decline in IT costs, which contributes to the increasing number of startups and the products and services they offer. This was reflected in the 34 startups that participated in the Digital Showcase portion of the event (wherein startups man booths to answer questions from passersby), a large number in comparison to recent years.

According to Aramex’s report, the year 2012 witnessed a boom in this sector, with e-commerce recording a 150% growth rate. However, in 2013 the rate slowed, growing by only 100% (still high compared to the 20% international growth rate).

Iyad Kamal, COO of Aramex, argued that the slowdown can be chalked up to several structural obstacles. First, the number of local merchants is still limited. He said “we cannot build the e-commerce industry with five, ten, or 20 companies. We need thousands of online merchants in the region and we need to promote them. We must make e-commerce a very easy process for growth and sales.”

The second obstacle lies in the continued reliance on cash-on-delivery. He revealed that this payment method implicates many logistical problems, delays in payment, and additional costs to the merchants, stressing that it is currently indispensable but “we should work on finding a solution to the problems it causes.”

Noura Al Kaabi, CEO of twofour54 and member of the Emirati Federal National Council (FNC), noted that small and medium-sized enterprises play a major role in the United Arab Emirates and drive economic and social growth in the country.

She revealed that these companies employ 90% of the labor force in the country. She also stressed that the region’s startups face many challenges, particularly with regards to mentorship, training, financial support, and talents, in addition to the fact that, she claimed, Arab entrepreneurs lack the spirit of taking risks and are afraid of failure.

Perhaps the most important point that Al Kaabi mentioned with regards to the Emirati government support for entrepreneurs is a new category of work visas that allows entrepreneurs to work without renting an office. twofour54 currently issues visas for those who work in the creative industry, while Dubai Media City provides discounted visas for entrepreneurs who are working with the accelerator In5. Even though Al Kaabi did not provide information on the date of launch or cost of this new visa, it is expected to help startups overcome a lot of obstacles they face in getting established in the United Arab Emirates.

Beyond government support, several well-known programs such as Flat6Labs and Oasis500 are expanding to Gulf markets, including Saudi and the Emirates. Other regional support programs, like Turn8 and MENA Apps, are expanding regionally as well. Arabnet also highlighted the growing interest of international players in entrepreneurship in the region through the participation of Oscar Kneppers, founder and CEO of Rockstart in the summit, who wore a t-shirt with his accelerator’s slogan – ‘we love startups’ – written in Arabic.

During Wamda’s meeting with him, he said “we see innovation in this region and feel great energy. We want to help. And we want to start our expansion into Asia and Latin America from the Arab region.”

Change in the venture capital scene

In addition to the increasing number of accelerators and incubators, a change in venture capitals also reflects the changing ecosystem. Christidis stressed that “this event is taking place during a pivotal phase in the venture capital scene, as we witness a shift from small funds (less than $20 million USD) and deals (between $500,000 and 1.5 million USD) to larger funds (40 to 60 million USD) and bigger deals (one to three million USD). The value of available funds has increased three or four times during the past twelve months.”

Walid Hanna, the managing partner of Middle East Venture Partners, also stressed this ongoing change in VCs, citing the fact that the majority of entrepreneurs understand their companies better than investors and only need money. He noted that of the 20 startups he supported, only three failed.

Arabnet continues to be one of the most important tech gatherings in the region, for entrepreneurs and investors alike, and will surely play a role in the ecosystem’s future growth.