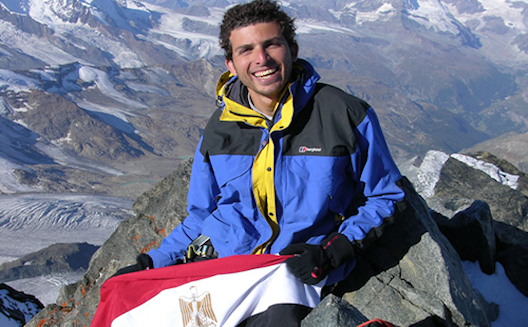 If Egypt’s entrepreneurship world has a movie star celebrity, it is undoubtedly Omar Samra. In a country without a mainstream outdoor culture, Samra is celebrated as the first Egyptian to climb Mount Everest in 2007 and is now poised to become the first Egyptian to go into space at the end of 2015. He routinely appears on the covers of fitness and culture magazines and strangers approach him in the street for business advice.

Behind this celebrity status and inspirational TED talks is the daily grind of running a business Samra set up in May 2009, an adventure travel company Wild Guanabana.

The company celebrated its five-year anniversary last week. During this time, Wild Guanabana expanded from Cairo to Dubai, broadened the range of its travel products, grew from a team of one to a staff of seven people and is now eyeing Saudi Arabia for its next chapter.

Five years ago, Samra quit the comfort and predictability of the corporate world, a private equity company, to bootstrap a niche adventure travel company in Cairo with $20,000 in personal savings.

Looking back, Samra recognizes the risk and how daunting that task really was in a market unfamiliar with adventure travel.

“With the knowledge I have now, if I was teleported back to 2009, it would be a much more daunting decision to make.”

Instead of travel experience, Samra decided to give the company all his time and energy.

“People tell you ‘keep your job, start the company on the side’. My feeling was always if I was going to do something, I had to quit cold turkey right away and dedicate 110% to it,” he recalled. “If I’m doing it on the side, then probably one of the reasons it fails is because I didn’t dedicate enough time to it.”

Wild Guanabana was not just aiming to create a niche in Egypt’s travel market, he was also establishing new environmental guidelines for his company to follow.

Wild Guanabana became the first carbon neutral company in the Middle East and North Africa. Being carbon neutral means calculating carbon emissions and environmental damage from a given trip and then offsetting or buying carbon credits to compensate. The procedure does not include air travel.

In an environment where few of the clients cared or prioritized environmental concerns in choosing a trip and were still learning about adventure travel, Wild Guanabana pioneered a new standard at a cost to its budding business.

He acknowledged there is an additional cost to being a carbon neutral company.

But it is the strength of his personal convictions, including breakthrough environmental standards in the regional travel industry, that are ultimately a big portion of Wild Guanabana’s success and solid brand equity.

Many of the clients at the five-year celebration in Cairo signed up for their first trip after hearing Samra speak or learning he will personally be joining the trip.

“I found out Omar will be on the trip to Nepal, so I decided to go,” said Reham Zahran, a data analyst at Vodafone, of her trip a year ago. “It was the hardest thing I ever had to do [physically], but it was an amazing experience.”

For many entrepreneurs and clients alike, the true appeal of Omar Samra Inc. is seeing how following your true passion and giving your all to what you believe in can pay off.

Speaking to clients often takes on a spiritual tone. The talks and trips have inspired several people to quit their jobs, reevaluate their life and choose a different path.

“I was inspired by him,” Mohsen Abdelhalim, who left his career as a chemist to set up a hiking school for Bedouin children near Saint Catherine, in Sinai. “He believes in what he is doing.”

On the back of initial success in Egypt, Wild Guanabana expanded to United Arab Emirates in June 2011. Samra says Dubai was always part of the original plan. “The initial idea was to cater to the entire region, the Levant and GCC market,” Samra noted.

If in Egypt it was about educating the clients about advantages of adventure travel, in Dubai there was no need to educate potential customer base. “In UAE we did not face pressure on prices, we felt a lot of competition was a bit more expensive than us,” Samra recalled, noting the more developed UAE market forced his company to innovate. “There was definitely a bigger drive and incentive to innovate and continue to come up with innovative products.”

Beyond Dubai, Wild Guanabana is in talks with prospective partners to enter domestic adventure travel market in Saudi Arabia.

“We’re currently finalizing business plan for the Saudi expansion,” said Samra. “We have a couple of people we’re talking to.”

The focus is on corporate clients and team travel products, a model that has worked well for the company in UAE.

“In Saudi Arabia it’s a completely virgin market, there are maybe one or two players in the entire kingdom in adventure travel,” said Samra. “So there is a serious opportunity for us to come in to disrupt that market.”

For a company that has achieved brand recognition and regional growth within a few years, the real challenge is staying lean and focused on quality of experience and innovation.

For Wild Guanabana, the goal is not to evolve into a massive sales force over the next five years, even though they expanding destinations to Sri Lanka, Albania and Malaysia this year.

“The company can still grow to its full potential, but I don’t want the DNA of the company to change,” said Samra, which is a balance of increasing sales as well as making sure the products remain competitive. “Eventually you reach a point where someone else comes up with a better idea and your sales decline.”