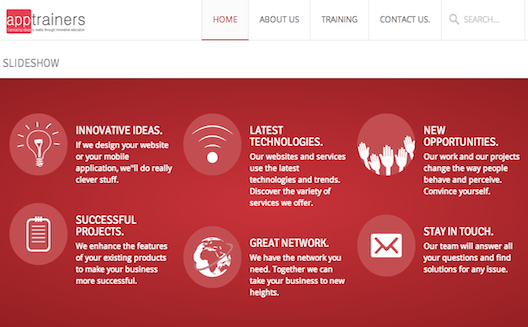 Today, app development has become absolutely necessary for entrepreneurs and businesses alike. But many companies have difficulty finding skilled developers, as we reported previously in an interview with game development company, Game Cooks.

To combat this problem, Jordanian entrepreneur Hani Abu Arab decided to launch his own project, to teach people how to develop apps for themselves or as a profession. “All companies need mobile app developers, but there are no accredited institutions that provide training for developers,” he said.

In January 2012, Abu Arab launched Apptrainers. “I did not have a lot of money and it was a side project at the beginning, but after a while I quit my job in order to give the project what it deserves,” he said. In a small office with three computers, Abu Arab took his first baby steps and began giving 60-hour courses that include mobile app development, game development, work on various operating systems and others, charging 400 JD (about $564 USD) for students and 800 JD (about $1,130 USD) for companies.

In order to promote Apptrainers, Abu Arab went to schools, sent e-mails to companies, and held free events in universities. “2012 was a difficult year. I couldn't find a co-founder. No one understood the concept enough to take the risk of quitting their job to join me,” he added.

To take his company to the next level, and create a sustainable and scalable revenue model, he deemed it necessary to create partnerships with big business players in Jordan and abroad.

Whereas 2012 was a year of challenges, for Abu Arab, 2013 was a year of achievements. As a result of his initial marketing efforts – and on the strength of the idea, Abu Arab says – “we started working with more than 15 major companies and institutions, including Umniah, the Talal Abu-Ghazaleh organization, the US Embassy, Amman Municipality, and others. Things started to become clearer,” he said.

Apptrainers relocated to a larger office for their lab to accommodate 25 people. He hired 6 developers, a sales representative, and a person responsible for marketing, he stated.

But when the founder wanted to expand outside of Jordan, he faced the problem of finding local partners in his target countries.

This hurdle of finding partners when expanding is one of the major challenges cited by entrepreneurs who participated in Wamda Research Lab’s first study, The Next Step: Breaking Barriers to Scale for MENA’s Entrepreneurs. Forty-seven percent of respondents confirmed that finding the right partners is one of the most important challenges that stand in the way of geographical expansion; 53% of experts surveyed agreed.

“We tried to create partnerships [that would facilitate our expanse into] Saudi Arabia, but we had problems finding a partner in the Gulf,” said Abu Arab.

In the meantime, he continued entering into more local partnerships with the program Fursati (‘my opportunity’), part of the Jordan Education Initiative of Queen Rania. Apptrainers trained more than 52 out of the 150 students in the program, according to Abu Arab. More partnerships followed in the early months of 2014, including several international community organizations that help young people find jobs. He also began working with Jordanian Knowledge Stations, a royal initiative that provides Jordanian citizens with the opportunity to use information technology and communication to provide better services to the society.

Having built a good reputation for his company over the past two years, he still has Saudi on his mind as a goal; he’s currently in talks with a potential partner company about the prospects of expanding there.

“Our slogan is if you have an idea, any idea, you will be able to make it happen at the end of the program.”