Dedicated to encouraging the Arab world’s aspiring science and technology innovators, the show is an initiative by the Qatar Science & Technology Park (QSTP) (owned by the Qatar Foundation), and has facilitated several success stories over the past few years, including Bassam Jalgha of Roadie Tuner, and Wamda’s own Hind Hobeika, founder of Instabeat. The program bolsters interest in science and technology in the region, as well as accelerates the development of the region’s next generation of innovators. 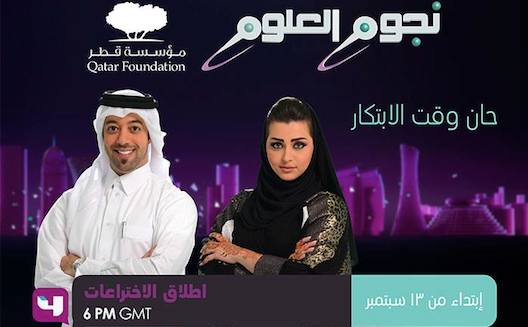 Stars of Science announced today that it’s unveiling a new format. Twelve candidates aged 18 to 30 from across the Arab world will be challenged in different stages of their products, leading to elimination rounds with an expert panel of academic judges and industry leaders until only four projects remain. The innovators’ resilience, ingenuity, and teamwork will be tested in challenges throughout the program as they develop their potential products from concept to working prototype. The four finalists compete for a share of a $600,000 USD prize, determined by a jury deliberation and voting from the public.

Get to know the new format better in this video:

Stars of Science candidates will be given access to an array of state-of-the art resources and will receive mentorship from top engineering and design specialists from across the globe.

Over the course of its six seasons, more than 28,000 young Arab inventors have submitted their ideas to Stars of Science. Stars of Science alumni have presented at TEDx events, The White House, and international forums. The 80 candidates who have been featured on Stars of Science have gone on to file 62 patents and found 16 regionally based companies.

Lebanese entrepreneur Bassam Jalgha, winner of Stars of Science 2009, participated in the press conference through a recorded video where he shares his experience driving Roadie Tuner as it collects awards and hits milestones. He’s currently in China manufacturing the product.

Check out the video here:

“The overwhelming interest from young Arabs in Stars of Science is indicative of a renewed enthusiasm for science and technology throughout the region,” said Youssif Abdulrahman Saleh, perennial juror and General Manager of Qatar Shell Research and Technology Centre in QSTP. “The high number of quality applications from talented, inspired people has made the selection process very difficult. I have no doubt that the top 12 candidates ultimately chosen will be our best innovators thus far.”

Last year, the winning projects range from products for the deaf and blind to an animal health monitor. Here’s a look at the four winners.

The program will premiere on MBC4 on 13 September, at 9 PM KSA / 6 PM GMT. Candidates will confront challenges, race against the clock, and compete with each other in 10 episodes. Daytime episodes focusing on each candidate’s personal story will also air beginning Sunday 5 October at 4 PM KSA/1 PM GMT on MBC4. Season 6 will culminate in a live finale in which voting from the public and jury deliberation will determine the final outcome.