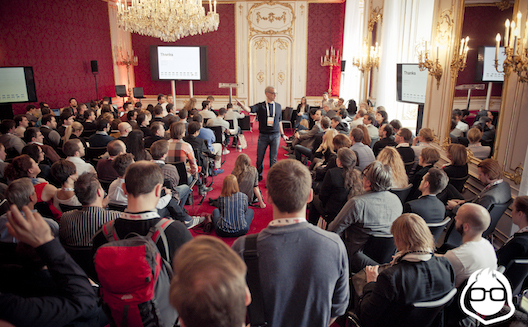 Two weeks ago, Jerry Colonna, former VC turned coach for tech CEOs, gave a workshop at the Austrian tech conference, Pioneers Festival. The talk was  called Being fierce: the 6 challenges of leadership and it tackled the issue of anxiety leaders face.

Pioneers Festival could be qualified as the opposite of the Web Summit. The two events may happen at the same period of the year – last year, they even took place during the same week – but they’re fundamentally different. Pioneers Festival, which takes place in the beautiful Hofburg Palace in Vienna, hosts 2,000 attendees, and boasts an impressive lineup and engaging talks on up-and-coming tech trends. This year, the event featured the World Premiere of the first flying car, the AeroMobil 3.0, and a selection of high-quality workshop, including a YCombinator office hour and Jerry Colonna’s workshop.

Colonna has coached the top tech CEOs in the world, and yet, when Pioneers Festival attendees are entering the room he greets them by shaking their hands and asking their names much to their surprise. He calls that breaking the barrier.

After introducing himself Colonna went on to share his state of mind, admitting to being anxious about how many people were attending, and how relieved he was that we laughed at his jokes. The result, as he expected, was that everybody felt good and felt respected. Something all leaders should keep in mind.

The discussion then went on to talk about the challenges leaders face. Colonna outlined six along with tips on how to deal with them:

1. Deluding yourself and the team

“You have to tell the truth, because if you don’t, you ask people to trust you on a lie,” he believes. “No one wants to be led by someone who lies to them.”

When you tell the truth, people may reject you, but most often that not, they will rally. Tell them the company is going through a rough patch, you’ll be surprise how many will accept to cut their paycheck for a while, he said.

2. Merging yourself with your business or product

The risk when you’re a leader is to get lost in a company, when there is no separation of self and the goal anymore. You have to think about something else than the thing you’re obsessed with. Other successful entrepreneurs talk about how they live and breathe their businesses, but Colonna seemed to think that over time that could cause problems.

3. Misunderstanding the role of a leader

CEOs often times think they should have an answer to everything, and that they can do everybody’s job better than them, that’s why they’re the CEO. According to Colonna however, the CEO’s job is to articulate the vision of the company, and build and maintain the team.

If you’re the CEO of a company, and are still coding, or acting as a product manager, you’re getting it all wrong, he believes. Your job is to build a machine that makes money, and to find people who are better than you at making products, and to unleash them by giving them what they need to succeed. And one of the most important things they need to succeed is clarity. 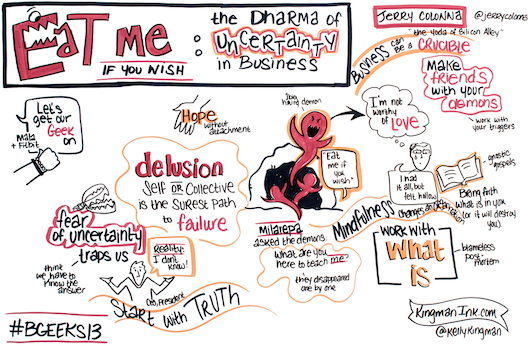 Your team needs to know what they’re supposed to work on and what to focus on. They need to know company objectives.

If all of your employees are coming to you with questions, and you’re feeling trapped, you’re not telling them enough. Employees want to internalize goals, they want to know what success is, and what failure looks like.

It’s difficult to have a discussion about firing someone, saying no, or bargaining. , Typically that difficulty is related to fear of being rejected and not liked. Remember, said Colonna, “a CEO doesn’t have to be the most liked person in the organization. Our discomfort regarding how people feel destroys trust in the organization.”

Nor is anger bad. What matters is that you turn your anger into something constructive. “The real challenge is not to prevent that the conflict from happening,” it’s to extract the value out of the conflict, he continues.

“Direct confrontation of an issue and communication about it is the best way to avoid unconscious primitive revenge,” said psychotherapist David Richo.

6. Externalizing responsibility for everything

Don’t take things personally, Colonna says. You need to create a culture where people explore what happens in case of failure, without blame. There’s a simple way to do this, he believes:

1- Observation: state the facts in a neutral way

Example: you haven’t returned the report on time

2- Feeling: say how you’ve perceived it

Example: it makes me feel you don’t believe in the company

Example: in the future can you give it to me on time?

4- Request: be as specific as possible

Example: If you can’t return it in time, let me know so that I can get organized

If you want to know more, check this conversation between Jerry Colonna and Jason Calacanis: