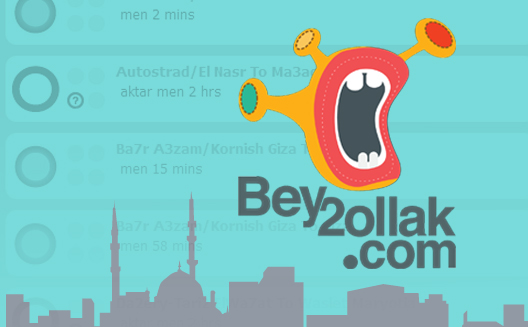 Egyptian traffic app Bey2ollak has created a bomb scare hashtag to better inform Egyptians of urban threats after a spate of bombings this week in the country's two major cities.

The hashtag #بيقولك_القنبلة_فين began trending last week on Twitter and Facebook and is fed by bomb alert information that’s provided by Bey2ollak users and verified by the company.

Bey2ollak was founded in October 2010 as a mobile platform for sharing real-time information about traffic conditions on major roads. The app, available as free Android, Blackberry and iOS downloads, shows the information via colored sad and happy faces for the level of traffic congestion, symbols for dangerous conditions, road works and accidents, and includes time elapsed since the last update.

Chief expansion officer and cofounder Ali Rafea says the app has been downloaded by more than a million people in Alexandria and Cairo and has over 100,000 active monthly users. They plan to expand outside Egypt from April, with the initial move most likely to be to Istanbul. The company is also looking at traffic-congested cities like Mumbai, Delhi and London.

Operations manager Waleed Mostafa says the way the bomb scare alert works is through the existing “khatar” or danger symbol that allows users to report bomb scares, protests and perilous road conditions. His team then verifies the information before it’s sent out onto the social media platforms.

The hashtag gained traction with Twitter users on Tuesday after a series of bomb alerts in Cairo and Alexandria. One device exploded in front of Alexandria's Mabaret Al-Asafra Hospital, killing one man and wounding three others, and just hours after an explosive detonated in Cairo's downtown area. Two other devices were allegedly found unexploded at Cairo Airport, but the government denies this story.

In perfect #Egypt, there wouldn't be a hashtag to inform people where the bombs of the day are. #بيقولك_القنبلة_فين https://t.co/UobxDwhHxZ

"[Security has] started to be very critical in Egypt. Many locations were affected by bombs," Mostafa told Wamda, saying they'd floated the idea of a bomb alert over a month ago. "As we have over one million users and they are active on the streets – Cairo streets and Alexandria streets – we get live information about bomb locations."

While almost unthinkable a year ago, the need for a bomb alert to navigate Egypt's densely populated cities is becoming less of a novelty as the number of attacks increase.

Mostafa says the hashtag has already proven itself an effective tool this week for people trying to find safe, uncongested routes around the city.

"It's very dangerous now and people are considering this data when they are going to work or going home."

Analysts, however, are divided on just how bad the situation is.

Egyptian journalist and security researcher Mohannad Sabry says the recent bombings are not nearly as sophisticated as those seen a year ago, when the Cairo Security Directorate was targeted by a truck bomb on the eve of the January 25 revolution anniversary or when Interior Minister Mohamed Ibrahim narrowly escaped a car bomb just months earlier.

"The bombs we are seeing now make it seem like they are made a bunch of young people... A bunch of amateurs who are untrained," he told Wamda. "I think (the smaller bombings) will continue. I think it is a natural thing for it to continue when we're not seeing any changes around human rights or justice at a national level."

But an American analyst, who wished to remain anonymous, believes security is worsening across all Egypt. He says attacks on electricity and infrastructure have increased in order to damage Egypt economically.

The reaction from Egyptian Twitter and Bey2ollak users towards the hashtag and app feature has been mixed. Some are praising the idea but dismayed that it's necessary, while others maintain a more laissez faire attitude.

The new bey2ollak app #بيقولك_القنبلة_فين is really sad. Egypt now is the country where checking bombs places is part of our daily routine

Cairo journalist Lina Ashour says she uses the app occasionally, but isn't concerned enough to rely on it for bomb-related traffic alerts.

"If anything serious happens, hearsay in Egypt works faster than the internet," she said.