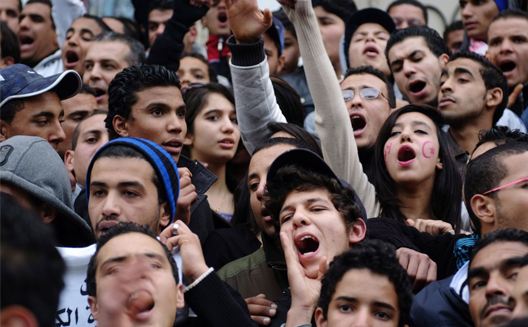 Tunisians are making their voice heard. (Image via The Nation)

The Arab spring proved the power of social media. Firstly that it goes far beyond gossip and dubious jokes, and secondly, that is is also a powerful tool for political expression.

Democracy aficionados have built on those initial forays to build platforms that give citizens the opportunity to participate in electoral processes, such as GOV in Tunisia and, potentially, Nouabook in Morocco.

In France following the upheaval, he and cofounder Pierre Alexandre Teulié, a former professor at the famous Political Sciences Institute of Paris and former advisor to French minister Christine Lagarde, developed GOV, a social network to change politics from a top-down to a bottom-up approach.

They launched the app in December 2013 for a French audience, but the two men couldn’t imagine not using it for the first free elections in the Arab world.

“[The objective is to] carry the voice of young Tunisians to weigh on the political life and orient the public debate to their real preoccupations and aspirations,” Demri said.

They launched the Tunisian app three weeks before the first electoral round, in November 2014, on iOS, android, desktop and Facebook. It enabled citizens to vote in real time for politicians, to start polls and give opinions.

Success was swift. The 3.5 million Tunisian voters expressed more than 800,000 opinions on the platform in a few weeks and the French articulated 1.8 million opinions via their platform from a country of 44.5 million voters.

“Politicians came on their own to GOV to post propositions [to citizens],” Demri said. And for once, they listened to what Tunisians had to say. Some even brought users’ ideas to life.

During the Tunisian elections running the app was a risky venture

“Polls were forbidden during the campaign so as no to influence the results,” Dermi said. He insists GOV is not a polling body.

“I don’t believe in the pollster activity because polls are ordered by clients who aim at obtaining certain answers,” he said. “We offer a tool for digital direct democracy,” and an “opinion weather forecast”.

Today, the founders are focusing on the French version and have put the Tunisian app into hibernation, because they can’t afford to keep the free, advertisment-less service running.

The whole platform is largely powered by its shareholder, the French creative agency Fred & Farid, which provides financial, some development support, and mentoring. 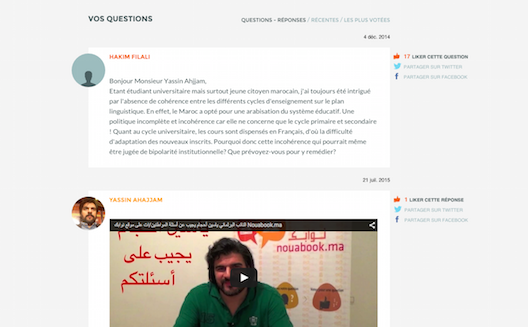 Simsim Participation Citoyenne (‘Simsim Citizen Participation’ in English) wants to use technology to encourage Moroccans to participate in politics.

“Citizens really rarely see a member of parliament actually answer to their needs and they have very few ways to transmit their needs to elected officials,” said Andrew Mandelbaum, an American formerly working at the National Democratic Institute and now living in Morocco.

“Most [people] have a profound mistrust of the government,” he said. “They don’t think parliament matters, they don’t think putting their voice out there will be useful to them.”

To change that, Mandelbaum and Hind Kabaj, a Moroccan who worked with democratic ideas in the United States, created Simsim’s first project: Nouabook.com, or ‘My MPs’ in the Moroccan dialect.

Since its creation in April 2014, the platform has let citizens ask close to 250 questions to members of parliament. Almost two-thirs have been answered, by 37 MPs from eight parties. Some even brought those questions to ministers and took part in Google Hangouts to answer in person.

“The biggest challenge is engagement both from citizens and MPs,” Kabaj said. “In the begining [citizens] were not sold, they thought nobody will respond or pay attention to their request. They were a little of skepticism from the citizen’s part. Now as they see engagement from MPs, they dare to ask more questions.”

To get there, the team of five had to test many outreach and communication strategies to convince more people to participate, and had to stay apolitical to convince the politicians.

“We’re extremely careful, we want to make sure we remain seen as apolitical, helpful to all the sides,” Mandelbaum said.

The team does moderate questions and don’t publically publish those which are too sensitive, but all queries are sent to MPs.

Like GOV, Nouabook is a free service which survives on donations.

In Nouabook’s case, money came from abroad, including from the European Endowment of Democracy, the USA-Middle East Initiative (MEPI), and the English Indigo Trust.

This year, the cofounders plan to explore video and infographic content to open the discussion, but also to add profiles to let MPs update citizens on their current work.

But the duo is not over-optimistic about what they can achieve.

“We won’t change the entire political system with this platform,” Mandelbaum said.

“[But[ this is a first step in creating useful relationships with MPs,” Kabbaj said.