Summer is out, schools are in and so is the biggest edutainment reality TV program of the region, Stars of Science (SOS).

The show, an initiative by the Qatar Foundation for Education, Science and Community Development (QF), promises surprises and will hopefully inspire future generations of innovators. It kicked off its seventh season with a press conference yesterday at the new Qatar Islamic Foundation Studies (QFIS) building in Doha. 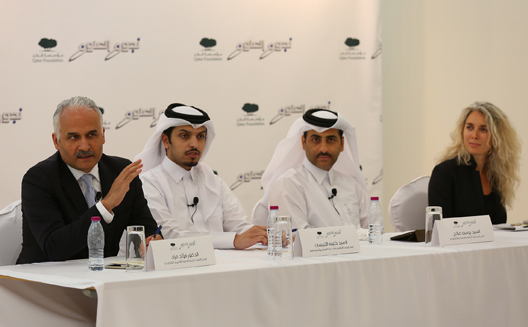 Dr. Fouad Mrad, Khalifa Al Kobeissi, Youssif Saleh and Viviane Zaccour during the press conference. (Image via Stars of Science)
Unlike many other press conferences, the morning fizzled with energy as previous contestants, colleagues and members of the press reunited at QFIS hall once again. Prototypes built by previous Stars of Science contestants were on display. The show’s presenter, Khalid Al Jumaily, moderated a panel.
“Innovation is creating economic value from ideas."

Innovation is a big part of the story, yes, but it doesn’t stop there. Dr. Fouad Mrad, executive director of ESCWA Regional Center for Technology and a permanent juror of Stars of Science, stressed the importance of what comes after education.

“Education allows you the opportunity to innovate and differentiate yourself. But then what,” he asked.

He explained that one of the key roles of the show is to help innovators realize their ideas.

Although the region doesn’t have a shortage of innovators, they face many challenges ranging from access to relevant mentorship, access to research labs, and a whole host of manufacturing issues. 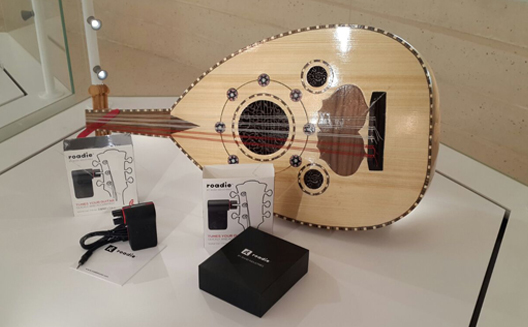 Band Industries' Roadie Tuner displayed at the QFIS. (Image via Stéphanie Nour Prince)
One can argue that the show functions like an acceleration program for industrial entrepreneurs. And by being broadcast into millions of living rooms in the region, it plays an important role in inspiring future generations of would-be innovators as it brings the audience into the life of the inventors - from inception to end-product.
Contestants gain even more from being on the show.
“I gained experience [through the program] I otherwise couldn’t have gained in 10 years of working on my own,” said season 6 winner Mohammed Al Housani via a pre-recorded message.
Al Housani designed Taqatech, an efficient solar energy system while he was on the show.
Since less than 10 percent of innovative ideas at a global scale actually make it to the market, according to Mrad, the word of the day becomes impact.
"This is for you"
Although the show is backed by the Qatar Foundation, the non-profit sees beyond the local benefit and aims to impact the whole region.

Stars of Science episodes are accessible online and contestants are eligible from anywhere in the world as long as they’re Arab. What’s more, officials hinted that this season might have a few surprises as to the different “types” of innovation that viewers will see.

This year’s 12 contestants will spend the next 3 months at the Stars of Science labs in the Qatar Science & Technology Park (QSTP) in Doha's Education City. There, they will receive mentorship and go through multiple iterations to refine their ideas and build their prototypes. The four contestants who survive the elimination rounds will share the $600,000 prize. One overall winner will be determined during a live finale, through voting by both the public and the show’s jury.

Stars of Science is potentially creating a community of industrial entrepreneurs. More than 90 contestants have participated in the show across all six seasons. Typically, candidates own the rights to their ideas and finalists gain access to a network of mentors to help them take their idea to the market. Some are using their experience to give back to the community.

One such example is Mohammad Ziad Chaari (Tunisia), a finalist on SOS 3 who, when given the choice, decided to turn the fruit of his research into a book on wireless power charging.

Viviane Zaccour, the show’s executive producer, pointed out that today, a significant number of applicants are students pursuing higher education in regional or international colleges, and are using the opportunity to be on the program to bring their research to life. 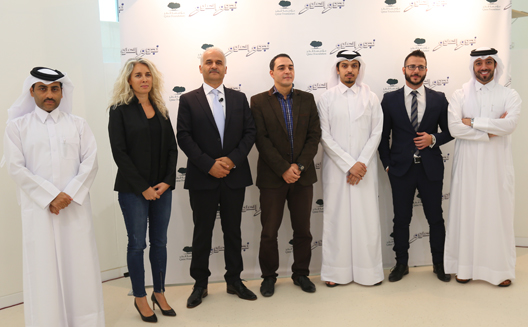 What does it take to keep a show successfully running for seven years?

Innovators and viewers. The show has seen great success in terms of viewership, but more importantly in terms of impact on previous contestants. Winners or not, they’ve all gained experience, exposure, and connections in the industrial world.

Majed Lababidi (Syria), another previous contestant in SOS 3 present at the kickoff, joined hands with Saad AlQahtani (Qatar) to launch Fi Technologies, a Wi-Fi advertising platform that allows advertisers to connect to their potential customers through a smart Multi-Media platform. They are currently being incubated at Qatar's Digital Incubation Center.

At the end of this season, Stars of Science will add 12 more contestants to its portfolio of innovators, but the real measure of its impact will not only come from the performance of their products, but also from their impact on new generations of industrial entrepreneurs.

For our coverage of last season’s finale, make sure you check out: Fresh off Stars of Science Season 6, these young innovators are ready to shake up the industry.