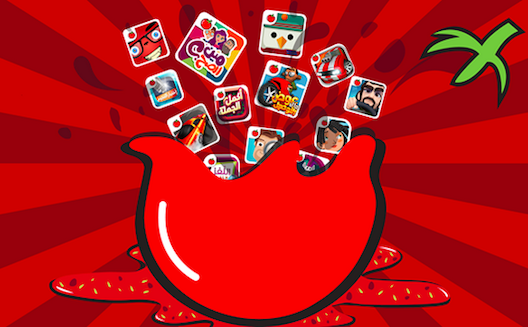 The only way is up for gamers in Jordan. (Image via Tamatem)

Jordanian game publishing platform Tamatem signed a partnership with US company Tapinator, Inc. (TAPM) a designer, developer and publisher of mobile games for the iOS, Google Play, and Amazon platforms.

For Tapinator, this deal opens the door to the Middle East and North Africa’s mobile gaming market, which is expected to more than triple in size in the coming years - from $680 million in 2015 to $2.3 billion in 2022, according to Strategy&.

"Gaming is a key driver in the MENA digital media market and [...] is expected to grow from 19 percent to 22 percent of the digital media market from 2014-2019,” said Tapinator CEO, Ilya Nikolayev in a statement. “The rise of the Arab digital generation is giving rise to a surge in demand for localized, culturally relevant digital content including video, social media and, of course, mobile games.”

20 of the games launched reached top 10 in major Arabic stores.

Trivia game Ekhtibar El Ghabaa was downloaded 250,000 times in 14 days and over 500,000 downloads overall on the iOS and Android platforms, ranking it number one in Saudi Arabia.

Tamatem has raised over $1M to date.

After landing their first round of investment of $450,000 in September 2013 from a group of international angel investors and VCs including leap ventures, MI ventures, Funders Club San Francisco, Oasis500 and 500 Startups, Tamatem received its second round from 500startups, Arzan VC and Kima ventures.

These achievements seem to be enough to attract Tapinator, which owns and operates a portfolio of over 150 mobile gaming titles that, collectively, have been downloaded more than 135 million times. A number of these titles have risen to the top of the mobile leaderboard charts and have been featured on the Apple, Google, and Amazon App Stores.

"The Arab mobile game market is underserved. Arabic is the fourth biggest language in the world, yet less than one percent of all mobile gaming content is available in Arabic. While games in English number around 400,000, there are only 250 Arabic games available on the App Store,” said Tamatem CEO Hussam Hammo.

Founded in 2013, Tapinator is headquartered in New York, with product development teams located in Denmark, Pakistan, Indonesia, Canada, and Russia.

Tamatem also has offices in Mountain View, California (in addition to Amman, Jordan) and is backed by 500 Startups and other venture capital firms. The startup is entirely focused on serving the Arabic smartphone users with games tailored for the language and culture of the region.

Tapinator and Tamatem will kick off this partnership via the December 2015 launch of localized versions of Tapinator's hit mobile games, Cop Duty Simulator 3D and Trucker Parking 3D.

“The region has one of the world's fastest adoption rates for mobile apps. There are 60 million-plus smartphone users in the Middle East and this number is expected to reach 100 million by 2016. Sixty percent of these users prefer consuming content in Arabic," Hammo added.