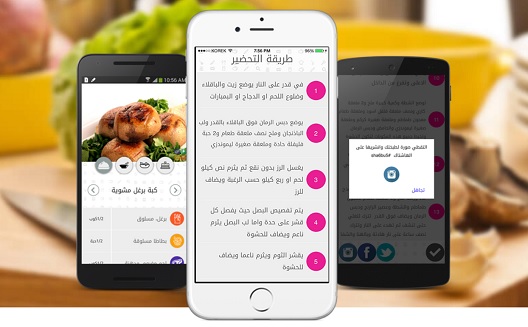 Sha6bu5 is hoping to profit from the Middle East's foodie trend. (Image via MAHAW)

The Middle East’s entrepreneurial newsmakers this year have been in the food delivery space, but little is known about Iraq’s entrepreneurs working in the same sector.

Foodie app Sha6bu5, which roughly translates to ‘what should I cook today?’, is not the most recent but it’s certainly led by one of the more tech and media savvy teams.

The application Sha6bu5 is the project of a developer team - who are all under 18 years old - called MAHAW.

The app, is an interactive recipe mobile application that suggests random recipes recommended by chefs.

The three-man team of Amr Khamis, Mustafa Abduljabbar and Salih Zainulabdeen gained their first taste of recognition when they got together at the Startup Weekend Baghdad in 2013, which introduced them to potential future clients. Their five other apps include one for Baghdad coworking space Fikra Space, and another for streaming football called Earthlink TV. 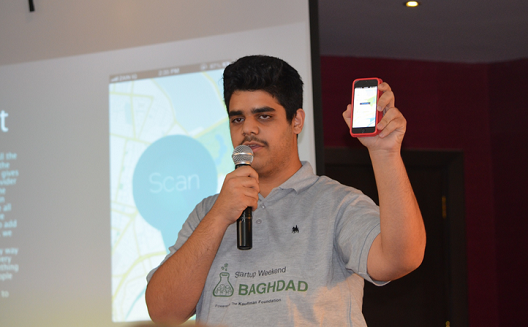 Sha6bu5 is not, however, the only Iraqi food app - the country’s entrepreneurs are en trend with the rest of the region in that regard.

In late 2012, the first professionally developed Iraqi food delivery mobile app EasyBites was launched in Erbil, enabling users to order from specific restaurants. It has since shut down.

And six months ago, a grocery delivery service called Mishwar was launched in Baghdad, allowing users to order groceries by phone or messaging applications such as Viber, WhatsApp, and Facebook Messenger.

It was the worst of times

They released the first edition of Sha6bu5 in March, a very challenging time in Iraq. The country was yet to recover from the shock of ISIS’ emergence and the developers were all students in their last year in high school - the most important year in the Iraqi educational system.

“We were under constant criticism by our families and friends because of the launching time. They cared about our future and thought we were wasting time,” the teenagers said.

The revamped Sha6bu5 was relaunched on both Android and iOS in November, after the team had made improvements to the app. They also just started making series of cool videos as a tool for user engagement.

Sha6bu5 has downloaded more than 12,000 times so far, and its success is in part due to its value to a global audience: the vast majority of users are in Iraq, the US and Saudi Arabia.

First time users Ali Salih and Hala Ahmed, both in Iraq, were up front with their thoughts.

“The app is not for beginners like me. It gives me the recipe and all the steps needed, but I still feel that I need a more comprehensive walkthrough with every new recipe,” Salih said.

Ahmed, on the other hand, loved the user experience. “The content is good, but I find the user experience magnificent. I admit that sometimes I just opened the app and browse through it just to enjoy the colors and see if there are any new recipes.”

Zainulabdeen said the team was working on new features such as a favourites tab that would make the app’s users more likely to return.

“Our aim is to not bother the user with too many questions while using the app, but in the same time we want to keep them engaged and send us feedback through social media and other channels,” he said.

MAHAW isn’t making any money from the app yet and they’re not ready to disclose their strategy to do so, but they hinted that recipes from professional chefs would be available soon as in-app purchases.