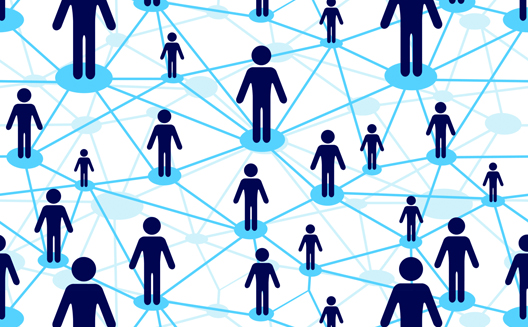 Networks are what make an entrepreneur ecosystem work. (Image via Entrepreneur Ideas)

This is part one of an edited crosspost from Knowledge@Wharton.

Entrepreneurs go it alone, the mythology insists. They are swashbuckling mavericks, bucking the establishment. The image is irresistibly romantic and deeply entrenched.

It is also completely misleading.

We have groundbreaking evidence that the most vibrant entrepreneurship is developed by high-impact entrepreneurs when they operate in tight-knit networks, nurturing fellow risk-takers and trading know-how, capital and tough love.

We’ve mapped this cross-pollination across generations and continents. And we’ve done this not by looking at the most obvious communities, like Silicon Valley, but at some of the harshest terrain for innovation.

Yet all too frequently, government-led initiatives produce lackluster results.

We’ve seen this in Kuala Lumpur, where the $150 million BioValley project has yielded just a handful of biotech companies. In Moscow, officials have spent over $2 billion without a major startup success. Even Santiago, well known for its Startup Chile program, has put $40 million into more than 800 startups, only to have almost 80 percent of them leave for greener pastures in places like Silicon Valley and New York City.

The problem in each case: no local network in which startups scale, scale-ups succeed and successful entrepreneurs infect the next generation with the entrepreneurship bug.

Since 1997, Endeavor, a non-profit organization in the field of high-impact entrepreneurship, has successfully worked to spawn “entrepreneurial ecosystems” around the world.

Endeavor’s more than 1,000 entrepreneurs have created over 500,000 jobs globally, generating $8 billion in annual revenues and giving back to the cities where they got their start.

They have succeeded in building vibrant ecosystems in some of the most inhospitable business environments in the world.

The research supported what we have long seen on the ground: entrepreneur networks don’t start with gleaming facilities or government guarantees, nor do they spring spontaneously from successful companies.

Instead, a few pioneering founders get the support they need at a critical early phase of their development and then actively spread the entrepreneurship fever by mentoring, inspiring and investing in subsequent generations of entrepreneurs.

These founders aren’t Darwinian, surviving at the expense of others. They see cross-company collaboration as being good for their businesses and good for the ecosystem.

Consider what’s happened in Buenos Aires amid a history of economic and political strife.

In the early 1990s, when Wences Casares moved there, the city was a wasteland for startups.

Casares, the son of a Patagonian sheep farmer, had dabbled in business as a teenager, starting a T-shirt company and printing a telephone directory. In college, he had the idea to start an online brokerage called Patagon.com.

Thirty-three local investors turned him down.

“We don’t even have a functioning stock market,” he was told. He quit school and launched the company anyway.

We have come to think of Casares as “patient zero” in the spread of entrepreneurship in Argentina.

While getting his business started in 1997, he met others burning with this strange passion. These included Andy Freire and Santiago Bilinkis, alums from Procter & Gamble who founded an online office-supply company called Officenet. Not long after, a pair of Stanford MBAs, Marcos Galperin and Hernán Kazah, returned to the country to form MercadoLibre, an eBay-style online retailer.

These neophytes created an informal support network – a breeding ground for entrepreneurship — fueled by shared information, rivalry, co-investment and the conviction that they were pioneers.

This network was buttressed by a novel consortium of local business leaders and outside mentors brought together by Endeavor.

Even with this support, the young founders still felt misunderstood. Bilinkis told us, “When Andy and I decided to become entrepreneurs, the word ‘entrepreneur’ didn’t exist in Argentina.”

From this isolation, a fever of entrepreneurship overtook Buenos Aires, fed in large measure by the success of these three companies.

In the span of a few years, Casares sold Patagon to Banco Santander for $750 million; Officenet sold to Staples; and MercadoLibre went public on the NASDAQ, reaching a market capitalization of $5.5 billion in 2014.

Today, Buenos Aires is in the midst of an entrepreneurship epidemic.

Two decades after MercadoLibre, Patagon, and Officenet got their start, the city is the leading hub for tech entrepreneurship in Spanish-speaking Latin America.

These three firms alone have influenced more than 200 second-, third-, and fourth-generation businesses. Their founders have launched new companies, VC funds, and even a popular TV show about entrepreneurship (“El Emprendedor del Millón”).

Whereas Argentine entrepreneurs once felt isolated and mistrusted, now anyone with a dream can tap into a thriving ecosystem of support.

There are conferences, meetups, bars where founders congregate, dance clubs where they mingle, even a soccer league where each team is named after a startup.

Entrepreneurship has become a national obsession.

To find out, Endeavor and Bain surveyed more than 200 Argentine entrepreneurs (some affiliated with Endeavor, many not) and asked them a number of questions, including: “Who inspired you? Who invested in your company? And who mentored you?”

We then followed up with dozens of in-depth interviews to identify specific ways in which entrepreneurs benefited from, or offered assistance to, others.

We found that nearly 80 percent of today’s tech companies in Buenos Aires trace their roots to Patagon, Officenet and MercadoLibre.

While their companies were individually successful, the firms had their biggest impact on the network by mentoring new entrepreneurs, investing capital in their companies, supplying experienced talent, and starting new ventures themselves.

Our results show that from 1990 through 2006, the number of technology startups in the Argentine capital grew by 5 percent a year. But over the next five years, that rate accelerated to 20 percent annually.

The best way to visualize this phenomenon is on a social network map (below).

The bubbles represent companies and the multicolored arrows represent different types of connections.

We placed companies on a series of concentric circles, like rings on a tree, based on their founding year. The size of each bubble corresponds to the number of connections it has made. The bigger a company’s bubble, the more influence that company and its founders have had on the rest of the network. 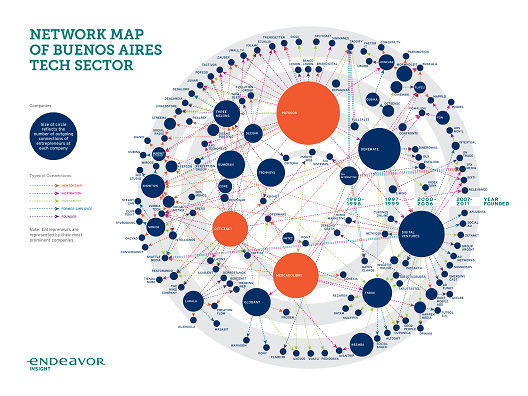 The role that these super-carriers play in creating and accelerating the growth of an entrepreneurial ecosystem is not unique to Buenos Aires.

We repeated our analysis in Istanbul (below) and Mexico City, and the results were essentially the same — a few very successful entrepreneurs spawn others and the effect multiplies over time. 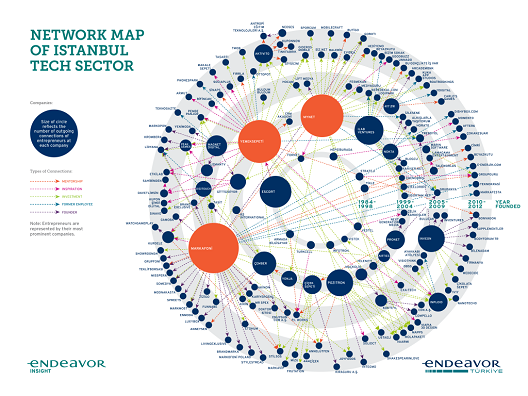 We then conducted 700 interviews in New York City to see if the phenomenon carries over to more mature economies.

Starting with early pioneers like DoubleClick, connections there skyrocketed between 2003 and 2013, fueling a corresponding explosion in startup activity. Today, over 2,000 tech companies in New York have attracted $14 billion in investment and employ 53,000 people.