Disclosure: the author was present at the Lebanon jam site as a participant with team Groovy Antoid, who produced the game Ugnug Says...

MENA’s indie game-making talent went head to head with the rest of the world in January, as developers from across the region participated in the 48-hour Global Game Jam.

Lebanon had teams in the competition for the first time, and organisers in 10 other countries, including Kuwait and Palestine, had budding developers participating over the weekend of January 29-31.

Global Game Jam is an annual event where developers and artists around the world develop video game prototypes based on a common theme, which this year was ‘Ritual’.

For local indie talent, this was an opportunity to show off their skills; here are the most notable submissions from MENA for this year’s Global Game Jam.

The objective of this puzzle game is to make your character reach a flag. However, instead of moving with the traditional arrow keys, this game requires each command be triggered by tracing a specific shape in a pentagram.Instead of fast-paced action, this is a game of calculated moves. With a minimalist black and white visual style and challenging puzzles, this game is app store-ready.Allegory of the Cave  (Egypt) 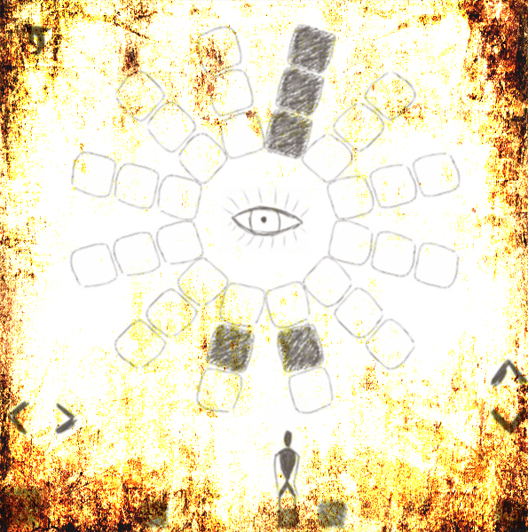 Based on Plato’s Allegory of the Cave, where prisoners in a cave perceive reality through the shadows projected on the cave wall, in this game you must align stones in a certain formation in a cave. However, all you can see are shadows, which requires you to use perspective and think in 3D in order to correctly position the stones.This game is a brilliant concept with challenging puzzles and uses relatively basic visuals quite effectively. However, it lacks a sense of progression and accomplishment as players are presented with all puzzles at once. It would be more satisfying for the player to progress through the increasingly difficult puzzles by solving them one by one. 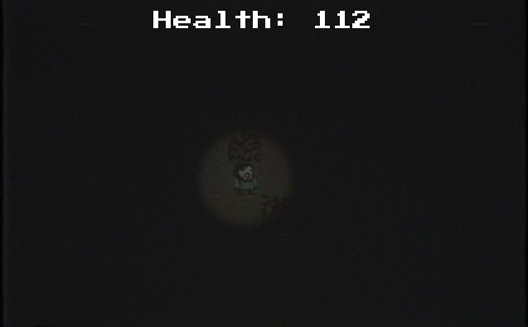 A creepy adventure game where you take on the role of a father searching for his son in a series of dark dungeons, all while a cryptic message is slowly revealed. You move one step at a time and have a limited number of them, so choose wisely and watch out for the enemies lurking in the shadows.The game has a retro pixel art style and the old VHS tape-effect adds to the eerie mood it creates. With some extra work on the user interface around the “Let’s Find My Son...” button that kicks off the whole game, this one could be ready for release soon. 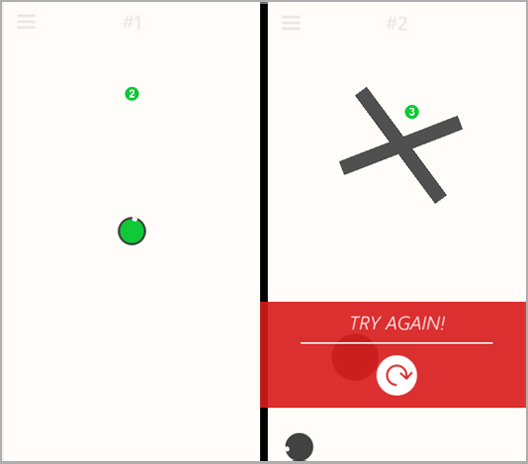 A green circle with a small opening constantly rotates. The color green indicates ‘air’. Upon clicking, the circle is propelled in the opposite direction of the opening, as if releasing compressed air, and losing some of it. Your goal is to strategically launch the circle at smaller units of air tucked away in tricky spots in each level, before using up all the air you have.Very fun, and frustratingly challenging (but that’s good thing). The gameplay works, but visually it could do better than the flat shapes it currently uses for graphics. Perhaps try reimagining the circle as a rocket-propelled space capsule and the green circles as fuel containers, with each level being a different section of an alien world?Honorable mentions: Badawi Runner and Um Zaki VS Brides

Both of these games share one thing in common: exceptional creators. The first was made by a 14-year-old boy and the second was made by three young women - a minority among the region’s game developers. 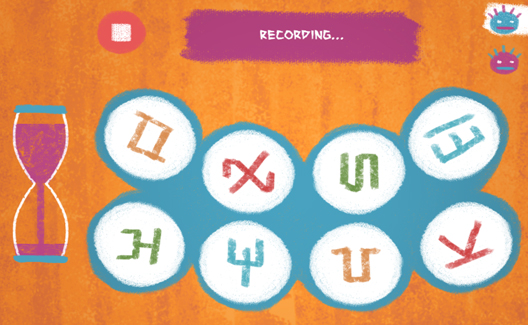 Taking on the roles of two aliens, two players are presented with eight pads that each play a distinct sound when pressed. The first player taps out a pattern, which the second player must then match. The second player then taps a new pattern for the first player to match. This goes back and forth until one player inevitably slips up.The game is basically Simon Says, with a multiplayer twist. It’s a fun time-passer, which could still do with some additional features such as player versus computer, increasing difficulty levels, or online play, so players around the world could challenge one another. 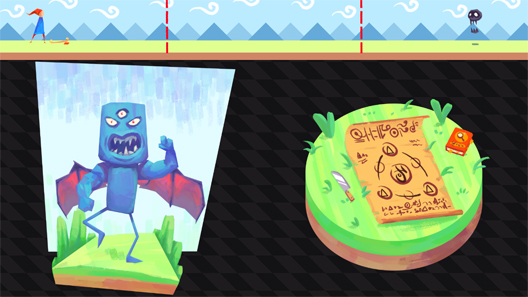 As a monster slowly approaches, you must assess its features (how many eyes does it have, for example) in order to figure out the appropriate symbols to use for the spell to defeat it. You only have one shot, so make sure you get the details right.

A very polished game, considering the amount of time it had to be made in. But although the monsters seem to be generated randomly, the novelty does wear off eventually. 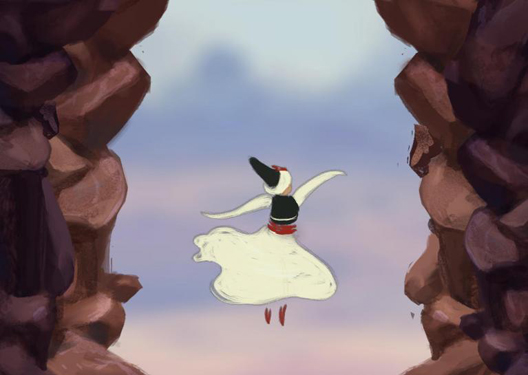 Though the game is unfinished, we do hope its creators revisit it and see it through, as the concept is too good to abandon. You play as a Sufi whirling dervish, ascending higher and higher between two mountain walls and avoiding obstacles in order to reach a state of enlightenment and inner peace. This is an interesting interpretation of the spiritual practices of Sufism, with beautiful painting-like graphics, which could not only be a fun game, but an educational tool as well. 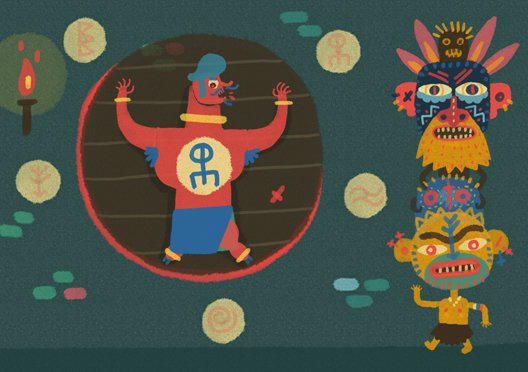 A hapless victim is strapped down, surrounded by symbols. Select the appropriate symbol whenever one of them appears on his chest, but be warned, the symbols fade away with time, so fire up that photographic memory.Very cool art style, the animations are a plus, and decently challenging, but the game could use more of a penalty for losing. Currently the guy transforms into a demon, then turns back into a person as if nothing happened. A retry screen would make the loss seem more impactful. 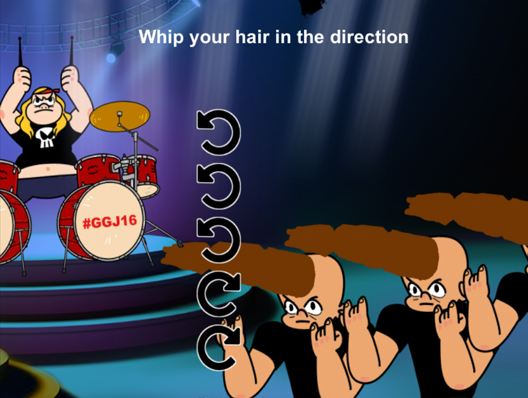 Taking place at a heavy metal concert, you begin by strumming some power chords as a guitarist, and soon must partake in the beloved heavy metal tradition of headbanging, making the concertgoers’ hair swing around in specified directions.Despite its quirky concept and art style, this game’s controls are a major drawback. The player controls the head bangers’ long hair, which spins around on an axis, influenced by realistic physics, making shifting directions a slow and tedious process. This could be improved by putting the player in control of the head bangers’ actual heads rather than their hair: more precise controls means faster action, which makes for a more satisfying experience overall. 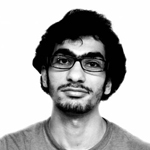