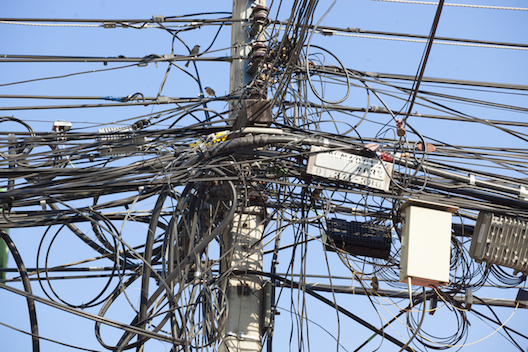 It's a big 'ol mess, electricity in Lebanon. (Image via Shutterstock)

This article is a crosspost with MIT Technology Revie Arab Edition written by Benjamin Redd.

After half a century of big promises for Lebanon’s electricity sector, maybe it’s time to think a little smaller. And smarter. That’s the idea being tested on a pristine hill overlooking the city of Tripoli in Lebanon.

The concept was spelled out in a recent paper by Khaled Hajar, a doctoral student at France’s Grenoble Institute of Technology and faculty member of ULF, along with Grenoble’s Ahmad Hably, ULF’s Ahmad Elrafhi, and colleagues. Here’s the setup: each of the campus’ three main buildings has a connection to the national electrical grid run by Électricité du Liban (EDL), the country’s state-owned operator. When this source inevitably fails—EDL goes out at least three hours per day in Beirut and 12 in Tripoli—each building also has a renewable energy source and a battery bank. Two of the buildings also have diesel-burning generators—the least ideal source not just due to fuel costs, but also environmental damage and noise pollution.

Hajar and his coauthors decided to treat each building as its own mini-campus. They then devised an algorithm that makes these three sites share electricity with each other depending on how much power each needs, how much is on hand, and the price of the source. Every 15 minutes, the algorithm reassesses the needs of each and adjusts the flow of electrons—except for sudden changes, like EDL going dark, which triggers an automatic reassessment. The algorithm is designed to minimize the cost of keeping the lights on.