A green solution could be the answer to the Jordan Gate Towers construction catastrophe in Amman.

The solution, proposed by architect Hanna Salameh in a Facebook video (below) last week, is that the project should be renamed Jordan Gate Park and should be completed as an eco-friendly development, with solar panels, wind turbines and an indoor farm, thereby solving the country's water and energy problem as well as offering a public space.

Salameh, representing the group of engineers who work at his Hanna Salameh design company, talked through his idea in a six-minute video posted to Facebook which has since been viewed over 600,000 times.

In case you’ve never heard of ‘the sixth cirlce towers’, a reference to their proximity to Amman’s 6th Circle, here is a little background: Construction of the towers began in 2005 following contracts signed by several Arab investors. The aim was to construct two skyscrapers, that would eventually house several projects, west of Amman. Construction was expected to be complete by 2010. This didn’t happen. Financial and legal challenges that arose as a consequence of the 2008 global financial crisis have caused problems for the project ever since.

There has also been backlash against its imposition on the Jordan skyline. Another problem was the weakening of sewage infrastructure and the increase in traffic that would be inevitably caused by the towers, especially because of the inconvenient location, which is largely residential with poor infrastructure. 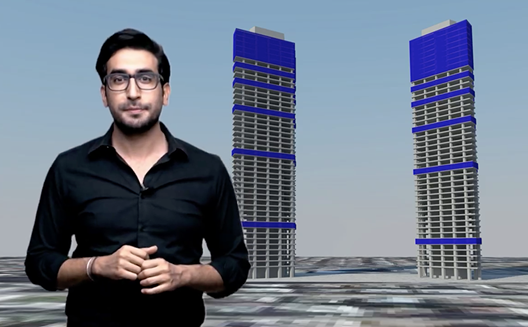 With 3D imagery, the video proposes an eco-friendly solution for the problem, which had been persistent since 2005.

Salameh, who started coming up with the concept two or three years ago, is serious about his idea, and said the reaction had been good. "We received numerous calls from several investment entities interested in our idea locally and globally," he said.

The most important thing about the idea, he said, was that it spread awareness among the public. "What we need today is people from society participating proactively in finding solutions to pressing issues, and we have a lot of entrepreneurial minds that can be invested in such projects."

Social media to make a difference

Salameh cannot tell for sure if his idea will be made into a reality anytime soon, but he says he is determined to push it forward.

"We laid out the plan and filmed the video in two weeks, especially because word had gotten around that work on construction would resume soon," Salameh said. "So we hurried with the idea of changing the challenges into a new concept that would not cause losses to the current investors, and avoid any damage to the site.

"There are a lot of details in this, and some legal issues for the project as well,” he said. "But I'm optimistic and will not let myself think of the worst."

Salameh founded his firm at the age of 24, then expanded to Dubai and Europe. He is now working on a social entrepreneurial initiative in Jordan to combat the country’s brain drain.

If Salameh and his team end up being the one’s save the towers and their environs, that will certainly be a boon for social media. Watch this space.