Dina Alnabulsi is a business analyst at Globitel, a Jordan-based telecommunications company

The Middle East and North Africa (Mena) not only has the largest unbanked population in the world, it also has the largest global gender disparity in terms of financial inclusion. The World Bank report states that 52 per cent of men have access to a bank account as opposed to only 35 per cent of women in Mena; this disparity has a remarkable impact on women’s employment and financial independence.

By definition, unbanked individuals are the ones who do not have access to a bank account or financial services, such as saving accounts and credit cards, etc. While underbanked individuals have limited access to some financial services; however, they rely on cash and alternative financial systems to perform their financial transactions instead of an affordable banking setup. Due to their lack of access to a proper banking system, these unbanked (or underbanked) individuals have no credit history, making it tough for them to buy real estate or initiate a business. Moreover, participating in a cashless economy, daily financial transactions become more challenging to manage, which can influence the overall poverty gap in society.

In 2019, the average women's employment participation rate in Egypt, Jordan, Oman, Kuwait, Lebanon, Saudi Arabia and UAE—was 24.6 per cent compared to the global average of 47.8 per cent. As a result, women are generating less than 1/5th of the region’s GDP, resulting in an annual loss of $575 billion according to OECD. This disparity in the Mena region exists due to the social barriers imposed upon women, which hamper their chances to access jobs easily.

On the other hand, it seems like in some countries like Jordan; more women use alternative finance; according to Tanmeyah Jo’s website, approximately 74.5 per cent of the microfinance borrowers in Jordan during the first quarter of 2021 were women, with an average loan size of 569 Jordanian Dinars (JOD); and 426,574 active loans. It is important to realise that financial literacy is a prerequisite for financial inclusion. Although governments and institutions are making efforts to improve access to financial resources, such efforts can easily result in high debts and mortgage defaults if the stakeholders are not financially skillful, and even though alternative financial services may appear cheaper as costs are disclosed early on, they could add up to be more expensive.

Why is it important to close the gap?

Both men and women must be financially literate to make sound financial decisions, but in many instances, women usually face greater restrictions to banking access and suffer limited knowledge regarding financial benefits and products. Being financially capable is exhibited in common behaviours such as saving, planning, keeping track of one’s financial situation, participating in the financial system, and remaining up-to-date and informed. It is evident that when people are included in a financial system, they are better capable of improving their health, investing in businesses and education, and facilitating their entire families. Consequently, there is a ripple effect on the wider society to ameliorate standards of life.

Usually, children observe and mimic their parents' spending habits and in Mena, it is still very common for women to spend most of their time with their children. Hence, their interaction can play a vital role in transmitting financial skills and habits to their children, as they tend to follow the habits adopted by their mothers. Therefore, it can be concluded that the financial education of women can help educate future generations.

Mena women also tend to manage household resources; according to an IPSOS study, women are the major household shoppers in several Mena markets. The study reveals that 8 out of 10 women in the region are responsible for their household grocery shopping. However, these statistics vary from country to country; approximately 93 per cent in Egypt, 94 per cent in Saudi Arabia, 56 per cent in Jordan, 55 per cent in Morocco, and 46 per cent in Iraq. Moreover, women in Mena usually have high involvement in household purchasing decisions. However, they are mostly dependent on receiving an allowance - in Iraq 82 per cent of women and 81 per cent of women in Jordan are dependent on an allowance, compared to 45 per cent and 41 per cent in the UAE and Kuwait, respectively. 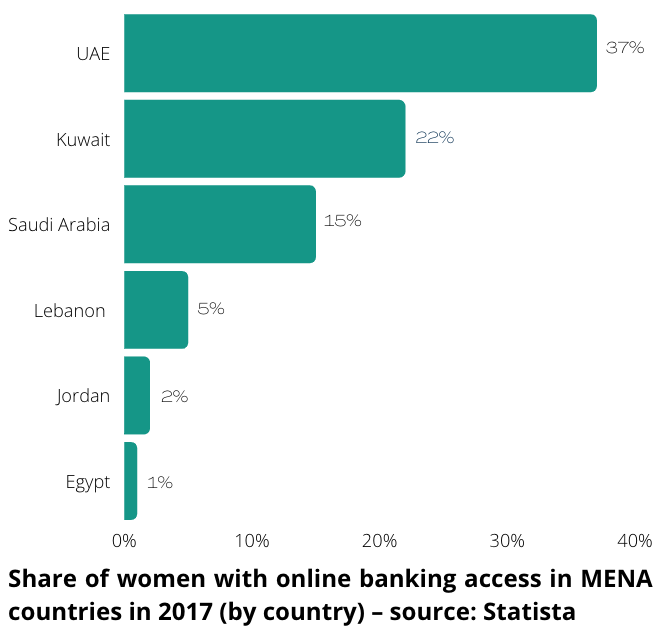 Women typically live longer, but they have shorter working lives on average which means they require financial awareness and education to sustain themselves. The average life expectancy for women in the UAE in 1999 was 77.8 years, compared to 73.5 years for men. Likewise, in other GCC states, the average life expectancy for women was 78.4 years, compared to 74.3 years in men. Furthermore, the complexity of financial markets is increasing, and women must be able to cope with it. They should be accomplished with adequate skill sets, participatory knowledge, and confidence to make sound financial decisions. Not only should they acquire appropriate financial literacy to manage their individual and family financial setup, but also they must be empowered to utilise the right financial services and cultivate their own entrepreneurial opinions and attitudes. As a result, they will free themselves financially and positively impact society in general.

How is financial literacy measured?

It should be noted that there is a difference between financial wellness and financial education. The latter suggests that education brings awareness and comprehension of how money works and how to handle it responsibly by creating an optimum budget, management of debt, and saving process. On the other hand, financial wellness is related to the implementation of this knowledge.

How can fintech help?

The female economy is growing fast in Mena, but it is still greatly ignored and underserved. Therefore, fintech startups have a great opportunity to exploit this situation. One idea is to adopt a gender-intelligent approach and transcend beyond the traditional gender-neutral products. Focusing on data-driven solutions designed around the needs and preferences of women. This model can enable women to be more resilient to financial insecurities and economic management. Moreover, fintech should seek collaborations with governments, financial institutions, and ecosystem stakeholders to design strategies, which can address the unfulfilled financial needs of women.

Finally, Mena countries have exhibited some growth in active and registered users of mobile money. Although this growth is not as high as Sub-Saharan Africa or East Asia, it still accounts for 51 million registered and 19 million active users of mobile phones. There are about 65 million unbanked women in Mena who own a mobile phone, among whom three million work in the private sector and are paid their salaries in cash. This can be an opportunity to leverage mobile solutions for the financial convenience of women. Such steps will make banking more accessible and reduce gender disparity in the financial industry.