As the most populous country in the Middle East, Egypt produces the largest quantity of plastic waste at an average of 5.4 million tonnes per year. While the past few years have seen the rise of multiple initiatives aimed at tackling plastic waste, the country's plastic pollution reduction targets are complicated by the lack of a sorting and recycling infrastructure, a near absence of recycling culture as well as the lack of the integration of informal waste pickers, who make up the largest workforce in the recycling space.

On the technology front, the recycling space remains widely underserved, with just a handful of startups and minimal VC funding. However, non-governmental organisations (NGO) alongside startups and grassroots communities are on the frontlines of fighting plastic pollution in the country, amid a mounting global push to boost recycling and sustainable waste management.

One startups looking to address the plastic pollution crisis in Egypt through technology is Dawarha. Founded in 2018 by Mohamed Salah and Justina Adel, Dawarha develops and manufactures reverse vending machines (RVM) that use artificial intelligence (AI) to reward consumers for depositing empty single-use plastic bottles or cans. The startup also offers an app that directs users to the nearest RVM. 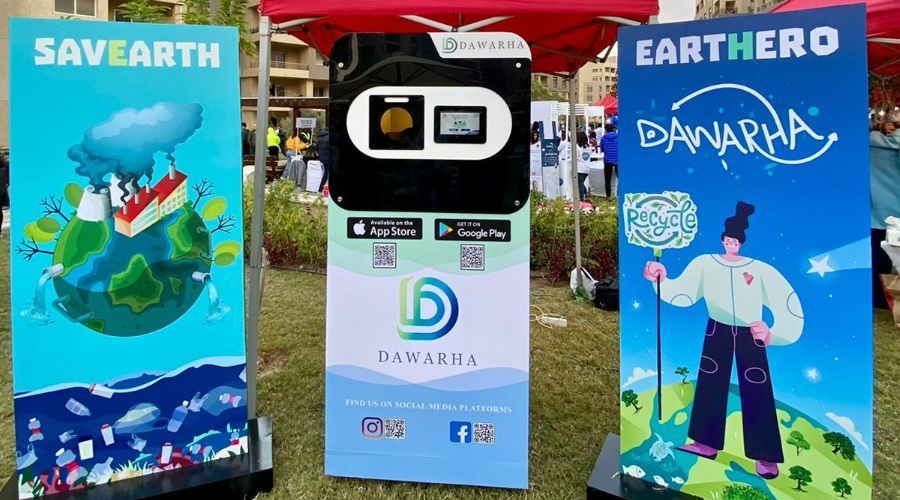 Once the RVM accepts a plastic bottle or can, customers receive a reward in the form of new water bottles, vouchers, or discounts that can be used at local stores. The company currently utilises three dark stores for waste collection and sorting processes. The items collected are later dropped off in a recycling facility.

"Most of the RVMs in the global market that we know of recognise the items based on a barcode, ours can recognise the bottles according to multiple factors including its material and brand," says Salah. "The entire manufacturing process is being conducted in-house, which has been a challenge for us given that the country lacks a robust domestic industrial base to manufacture complementary products. In order for us to go global, we have to continuously invest in our tech stack and product development. This is by far the biggest challenge we face," he adds.

In tandem with the rising trend towards environmental sustainability, businesses worldwide are committing to moving away from single-use plastic. This fact presents opportunities for growth for the startup, but the lack of consumer awareness is a big challenge for Dawarha.

"[In global markets such as Germany], F&B companies are responsible for collecting bottles through a nationwide deposit system, meaning that the companies add extra fees to the price of the bottles available for sale at retailers. Customers can [be] refunded the extra fees when returning the bottles at the local shop or retailer. This [system] does not exist here, so people tend to be more encouraged to recycle waste when they are rewarded. Therefore RVMs are found to be one of the most effective methods of waste collection and separation from the source," says Salah. "There are an average of 15,000 bottles being poured into our machines on a monthly basis."

The startup caters to multiple private sector companies, but it primarily works with brands like Nestle, Coca Cola, and Pepsico, along with supermarket chains Spinneys and Carrefour. Working with FMCG brands has enabled the startup to benefit from the current q-commerce boom by offering direct-to-consumer offerings in exchange for plastic waste.

Towards that end, Dawarha will install vending machines next to its RVMs. These machines will offer customers a myriad of products including grocery items.

"Through the app, customers can order items from the vending machines and have them delivered to their doorstep. The introduction of the home delivery feature will continue apace with our plans to ramp up our waste pick-up services," he explains.

To further scale its operations and increase the number of RVMs, Dawarha raised $1.5 million from a group of angel investors. So far, the startup has placed 16 machines in the market and is planning to deploy more than 200 machines next year.

It also has plans to grow its footprint regionally, starting with the UAE.

"We are seeing a rising demand for RVMs coming from the GCC given the fact that our machines cost a lot less compared to those coming from Europe. We already started selling machines to some businesses in the UAE, but we are yet to expand operations over there," says Salah.