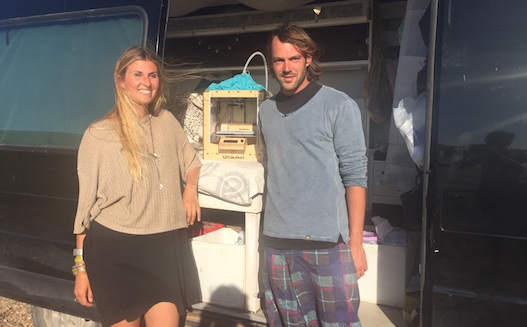 Jennifer Gadient and Fabian Wyss in front of their Ultimaker 3D printer. (Image via Aline Mayard)

It’s 6pm on the beach at Taghazout, a fishing village in southern Morocco. A minivan is approaching.

This is no ordinary minivan though. This is home, transportation and high-tech lab for Swiss designers, and keen surfers, Jennifer Gadient and Fabian Wyss, the couple behind Project Seafood.

When Gadient and Wyss left Berne, Switzerland, for the Mediterranean shores, they had one goal in mind: to asses the feasibility of plastic waste as a raw material for 3D printed objects.

Gadient, formerly a fashion designer, and Wyss, who worked as a product designer, spent a short stint in France, then two months in Spain, and now they’ve settled in Morocco. 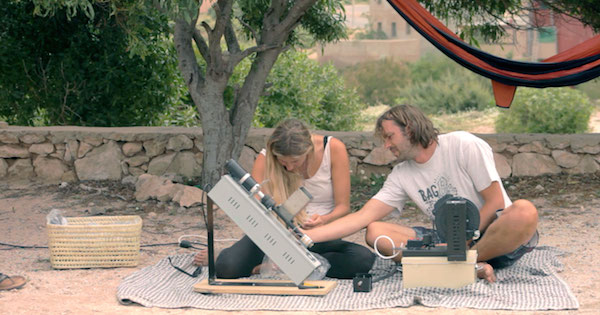 Wherever they lay their hats, that is their 3D printing home, Gadient and Wyss. (Image via Project Seafood)

A 3D printing lab in a mini-van

After turning their van into a custom-made bedroom, the couple needed to find the equipment required to 3D print. “Ultimaker [the 3D printer makers] gave us a printer, and in exchange we give them feedback on their machine and content,” explains Gadient. “I think what interested them was that idea of recycling, and mobility. What does it mean if someone doesn’t have a factory, but travels with it?” adds Wyss.

Printing from plastic waste is a long process. The duo starts with gathering litter alongside the beach, and then moves on to shredding each collected object several times over, using a manual shredder. They then turn the plastic shreds into filaments and granules, using an extruder that will be used to power the 3D printing process. 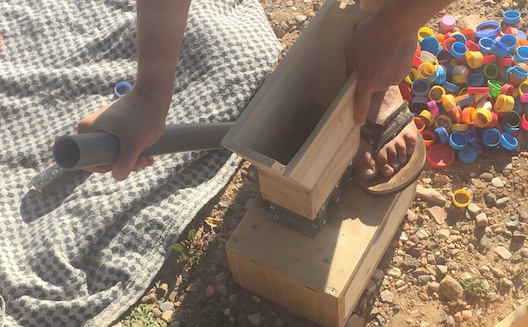 A Filamaker shredding module, which is enclosed with a wooden box, where they can shred a botte top 15-20 times. (Image via Aline Mayard)

For the pair, the experience was as important as the results. “We decided not to cheat,” explains Gadient. “We didn’t print anything before we left, we wanted to print the first things with the products we found on the beach.” 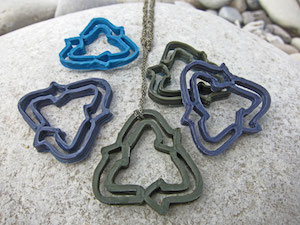 It turned out that was their only option though, as the 3D printer was only delivered a month after their departure. So, while they were waiting for the printer the team collected plastic waste and turned it into filaments, all with no clue as to whether or not it would work. “We wanted to print some products at 3D printing labs in Spain, but they were all too afraid,” remembers Wyss with a laugh.

A little sceptical themselves they tell Wamda that they were not sure if the printer would be robust enough to bear the travel, as well as the sea side. “The machine we have is a self building kit, it’s really stable and even if something breaks we have a good chance of being able to repair it ourselves,” adds Wyss. “We really took care of our machine, and if we were not sure, we wouldn’t try it.”

Not all plastic is good

It’s tough for the duo to know what type of plastic to use. “Knowledge is very difficult in this field,” explains Wyss. “We assumed that we could use polyethylene and polypropylene from other projects that seemed to have achieved it.”

The advantage of these plastics that that they can be easily sourced as these are the ingredients of most plastic bottle lids.

“We quickly have a bag full of plastic bottle lids,” says Gadient. “And the more we go South, the more we find.” Some of these bottle lids were left by tourists, she explains, but much more were drawn by the sea current. 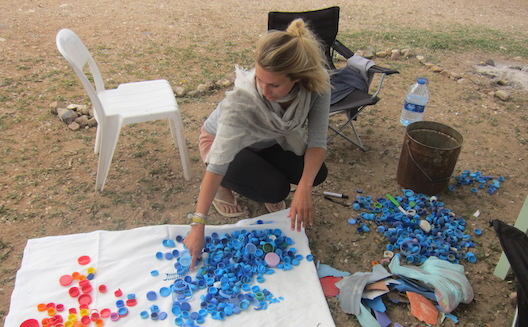 “What we really don’t want to use is PVC because it’s really toxic if you overheat them,” clarifies Wyss. “We simply don’t have the technology for that.”

Gadient adds there there is a very active community online where people are trying a lot of things with plastic and 3D printing, and then sharing their results.

Living in a van

The technical aspect is not the only challenge in this project though. Living and working 24/7 in such a small van is more than most people could handle. “Sometimes we enjoy it, to be close to each other, and to be able to discuss everything, we cannot just walk away and go back home. Some days though, you just want to have your privacy.”

In any cases, getting angry doesn’t fix a thing. “At a certain point, when you’re in an adventure like this on, you can’t really go back anymore because going back is an adventure in itself,” continues the Swiss man. “Whether you go back, North or South, the journey continues, so getting angry won’t change a thing.” 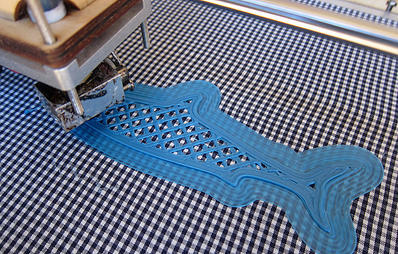 For now, the two designers are only selling a handful of creations, online or to people they meet along the line, like wax comb for surfers, plastic logos or small decorations. In the future, they’d like to create more convenient products, like sunglasses or key rings.

“We never expected to make a lot of money,” admits Wyss, “but there was this hope to find a way to make it sustainable. What we gained is human experiences, technical exchange, and meeting great people.”

This summer, the two cofounders are going back home to get some perspective, find a new energy, get some funding, and get ready for the next stage.