Dubai wants to be a world-leader in building smart cities and it’s attracting corporate players from around the world clamouring to be involved in the futuristic project.

Wamda met with Rabih Dabboussi, managing director of CISCO UAE to talk about how Dubai’s smart city strategy, launched last year, should work and the role the various players can have.

Dabboussi, 44, is the driving force behind Cisco’s Smart City strategy in the UAE and in the Middle East. A father of three and avid cyclist, Dabboussi joined Cisco in 2006 as an engineer in 2006 and moved his family to Dubai in 2008 to lead the company’s engineering section for emerging markets. 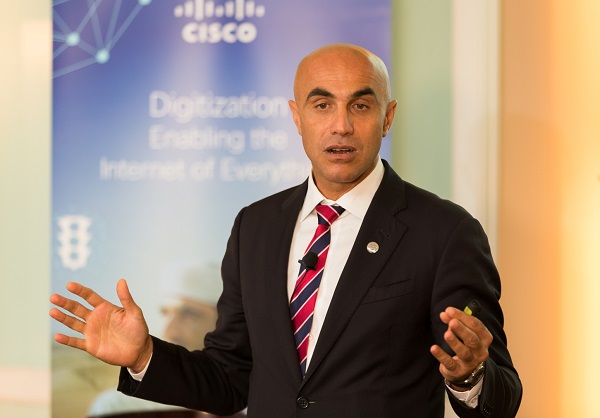 Today, as the head of Cisco's Middle East operations, the Lebanese-American is leveraging his experience in mobile phone technology in the US to focus on building connected communities in the Gulf.

If a smart city requires a vision, it also requires planners and tech suppliers to build it.

Cisco has form in smart city development around the world. Its Smart+Connected Communities programs are implemented in 90 projects worldwide. These the company says on its website, can help those in charge “address problems using intelligent networking capabilities”, which provide the information and services smart cities need in order to truly earn the name.

The company is working with the Dubai Design District to roll out its smart city tech within the creative entity’s greenfield pilot project. It’s also done a deal with Dubai’s Department of Economic Development to provide physical round the clock government service points allowing residents to register businesses or licenses online, the first of which will be in Dubai Mall. 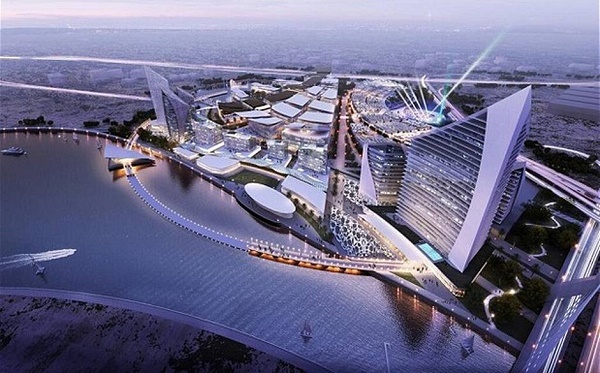 Wamda: Why are you such a strong believer in Dubai becoming a smart city?

Rabih Dabboussi: The first reason is because Dubai has a proven track record of setting a vision, going in the direction and achieving it.

The second thing is because part of my job is to engage closely with lot of government officials and leaders and I see their thought process, their planning... It gives me a tremendous amount of trust and comfort (to know) that these people know exactly what they are doing, where they are and what they need to get where they want.

The question is how we’re going to accelerate the execution of this vision and achieve the goals in the quickest, most efficient and lowest cost (way) for the city.

Wamda: If we look at what has been done in Dubai so far, do you think the city is on the right track?

Dabboussi: (They have made) a good start because it’s a journey not a project. You don’t start a smart city project and say you’re done three years later. It’s only the beginning, the baby steps of turning the city into the smartest city in the world is going to be in this three year period and those baby steps toward a smart city will deliver thousands of use cases* with a tremendous value.

The nice thing about building a smart city is that the government doesn’t have to do everything by itself. They just have to set the vision and the initiative, build the platform and open it - still regulated with the right laws - for global innovation to come and contribute.

There is no reason why a great app developer who lives in Poland won’t be able to access the APIs of traffic and demographics to build the next Uber for the UAE.

* A 'use case' is an engineering term for a list of actions or steps that define the interactions between an actor and a system, to achieve a goal.

Wamda: What should Dubai provide to help build a smart city?

Dabboussi: When you think of (smart city) infrastructure, the most basic element is connectivity.

In the past, we had our computers and laptops connected to the internet and now we have so much more, our eyeglasses, our wearables, our shoes, our watches… the sensors that are (used) in ocean monitoring and measuring the amount of oil pumped from the sea beds.

All of these now enhance the experience of a smart city and give us the platform to be able to take decisions quicker, more efficiently and in the more meaningful way. I believe that in the future our kids will laugh at us and they will say our parents and grandparents use to have something called hotspots, while their children will say what is a hotspot?

Wamda: Is there a role for entrepreneurs in building Dubai’s smart city?

Dabboussi: There is a tremendous opportunity for entrepreneurs to come up with new solutions.

Initially, we will import ideas, technologies and solutions but that’s not sustainable over the long-term because innovation must be here.

We have to build things for Dubai, in Dubai; we have to build things for the UAE, in the UAE. We’re starting to see startups established here, or start to open offices because they want to understand the vision and how it maps to their innovation engine and strategies. We will get there and will have more focus on research and development and more innovation based here.

Wamda: Do you have any advice then for those entrepreneurs?

Dabboussi: Look at the niches, the key strengths that you have and try to align them to the top priorities of the government leaders in whatever vertical you look at. I have no doubt there are opportunities for everybody.