Efficiency and seamless data integration were the main motivations needed of the d3 Smart Platform demo'd in December 2015.

The first of its kind command and control center manages the data of the entire district, serving business owners, tenants and visitors. The center will also “receive real-time information about everything from people flow to energy consumption within d3”.

“You are starting from scratch, building it from the ground up while aligning with the government,” Huwair said. “We need to be as realistic as possible about what we can achieve. Being a pilot ground for Dubai means whatever we do needs to go back to the city.”

Dubai has seen its own set of smart initiatives implemented in the past years.

More than 200 locations in Dubai now have Wifi access under the WiFi UAE plan. Dubai metro and buses also enjoy the service. DEWA has plans to set up electric vehicle charging stations across Dubai, and has developed a strategy for smart grids connecting solar energy to houses and buildings.

“As district operator, I can manage the traffic [like] how many parking spots are available and manage the community coming into the district. The old model of doing things in a conventional way is not going to stay,” he said. 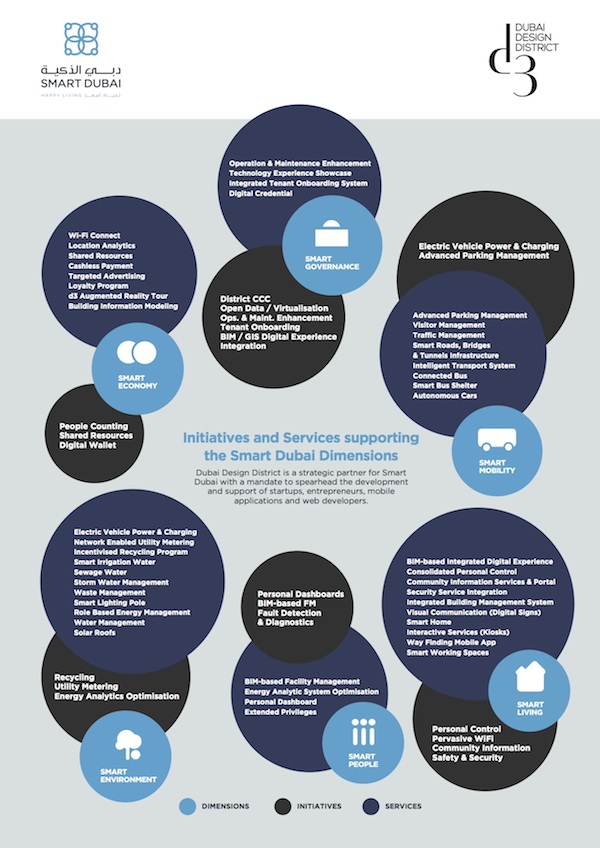 After Dubai’s ruler and prime minister Sheikh Mohammed’s declaration in 2013 that Dubai would be the world’s smartest city by 2017 (not even nine months away now), the government created the Dubai Smart City Office and the Dubai Smart City Establishment. Both there to unify the previously scattered elements of Dubai’s information communications and technology sector.

Key to transitioning to the new model is the individual consumer. For instance, d3’s own security system employs facial recognition as identity proof for those who choose to enroll. Once recognized, the lights and temperature at the user’s desk or office turn on to the preferred setting. As Al Shehhi says of the consumers, “you are the identity”, making consumer data the main commodity in smart city development.

If consumer data is the main commodity, then consumer privacy is the unavoidable tag along.

The newly drafted data law address that exact concern. The law enables government sectors to share information with each other, resolving the agony of updating government records in case of a change in the resident’s status. The law will also eventually make individual data available to the public.

Smart Dubai is quick to assure though that the all data is secure. “I as an individual want to access that data, then I should be able to. Dubai should be known as a safe hub,” director general of the Dubai Smart City Office said.

Along with safety, she also wants Dubai to “lead [the smart] industry and not wait for the technology to come” to it, inviting industry players from around the world to try out their products and initiatives in the Emirate.

Having collaborated with cities like Amsterdam, Barcelona and Madrid, DSO’s Eng. Muammar Al Katheeri, executive vice president of engineering management, too believes in the need for partnerships.

“We have acknowledged that everyone is a player in the team as we are looking for not only an individual product or case,” Al Katheeri said. “As Dubai is hosting a lot of nationalities, we are keeping the opportunities open, which can be a part of the Smart City initiatives.”

For Huwair, offering d3 as a test bed and a collaborative space proves useful when on boarding partners and new businesses in the smart system.

“We’re opening opportunities for all and [want to] collaborate with them,” Huwair explained. “We have the mechanism to provide data…We will share whatever we are doing. So, to a start up, [we then ask] what can you do? We are working towards an economy that builds itself.”

As one of the businesses at d3, Copia Group director Mohamed al Borno, implemented one the  smart energy solutions offered.

“Who would say no to such a strategy,” he explained. “It is green, smart and efficient and all for the bigger picture. As a business the more we save money, the better it is.”