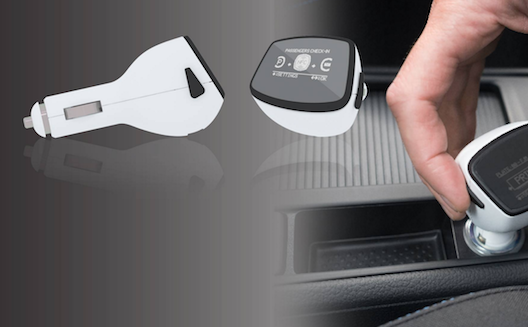 GoSparc, an Amsterdam-based startup, created the aptly named 'Sparc' device. It tracks the location, passengers, drivers and the vehicle itself. The device can plug into a range of vehicles, from trucks and cars to electric bicycles.

At the recent Telematics Conference for the Middle East and Africa, cofounder Charlotte Aldarwish explained how GoSparc had already attracted business consumers throughout Europe. Savac is one, a French bussing company that uses Sparc in its vehicles to keep track of its drivers and deter them from speeding. “There are different regulations in France. For example, for speeding fines… if as an employee you get a fine, then it’s actually the CEO who has to pay a lot of money, or gets points deducted. So, it’s very important to see who’s driving company property.”

And the Europeans are popular - it turned out that at said conference not one of the three fledgling companies vying for contacts and investment opportunities could claim a presence within MENA.

The Dutch have also employed the use of Sparc. “There are a lot of initiatives going on in Holland to reduce traffic during rush hour, so the government is giving money back to people that don’t travel during rush, or different incentives. So it’s used for that as well.”

Despite their European origins, it was evident that each startup had made the journey to this year’s conference with the intention of venturing beyond their current markets to build connections in the region.

Angus Webb, the director and founder of UK-based Dynamon, was animated in speaking with conference goers about his company’s telematics value-added service, which applies algorithms to “provide fuel saving recommendations to transport companies based on how they use their vehicles.”

Webb anticipates that Dynamon’s service, which is in a pilot stage currently, will be an attractive investment for telematics companies both in Europe and throughout the MENA, to provide to their commercial vehicle companies. “I’ve made lots of connections on this trip, and there’s a few telematics companies I had in mind, and they’ve spoken to me and they’re really interested.”

Amid recent cuts in fuel subsidies across the GCC, a service like Dynamon’s would closely align with energy efficiency initiatives throughout the UAE.

It was clear that these startups had their sights set on cross-border expansion. But the question remained as to whether or not the UAE telematics industry has plans of of doing the same. Do they understand what they have to offer outside of their local markets?

According to Jan Cools, CEO of traffic monitoring solution Be-Mobile, the UAE telematics industry has not yet fully harnessed its geographic power.

A combination of high-level infrastructure and close proximity to Europe, Africa and the far East puts the UAE in a uniquely advantageous position. “If they can stimulate a new way that local people, or even foreign people, want to invest to set up their company innovation over here, then the environment is very inspiring[...] I see lots of opportunities.”

Be-Mobile is based in Belgium, and according to Cools, “[Europe] is not always the right location to be”. Gaining access to a more central location, like the UAE, that provided easier access to Africa and the Middle East would be ideal for companies like Be-Mobile.

However, it may take time for the UAE’s telematics leaders to take advantage of their strategic locale and stretch beyond their regional comfort zone. Vehicle tracking company SamTech Middle East’s CEO, Samir I. Abdul Hadi, has seen the company develop throughout the Gulf in his 35 years with the company. “We have an office in Saudi Arabia, we have agents in Oman, we are looking now to open an office in Qatar, and different countries around.  After that, maybe, if we are strong in the Gulf, we will go outside. But I cannot jump the stairs, we have to go step-by-step.”

As oil prices fall and subsidies fade, GCC countries will be more incentivised to develop technologies that promote and expand economic efficiencies. Following the conference, one would question whether UAE-based telematics companies will be at the forefront of this opportunity for regional innovation and expansion, or if small and limber European startups will beat them to the punch.