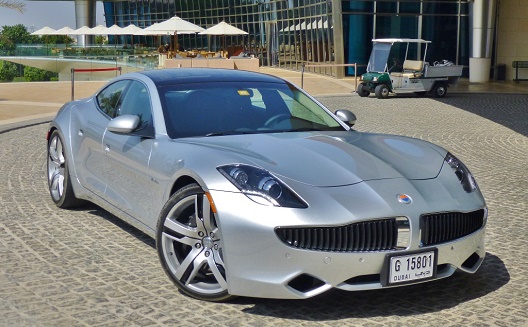 The Danish-designed hybrid Fisker Karma, introduced to the UAE in 2012, is unlikely to be part of MyCars on-demand rental offerings, but it would certainly attract the kind of buzz CEO Ben Pullen is looking for. (Image via Drive Arabia)

Carpooling came first but car sharing, a hot subject for startups globally, has finally arrived in the Middle East.

MyCars, an early-stage startup based in the UAE, believes it can successfully establish the ZipCar concept of on-demand car rentals in the region.

CEO Ben Pullen (below, image via Twitter), CTO Heloise Antrade and CFO Finney Thomas formed the company in August 2015 and are launching what they call a ‘sustainable car club’, to make private car rentals simpler for everyday use.

Members access a rental car through the MyCars app, paying-per-use or via a membership fee, and hiring in hourly increments rather than by day, as one normally would with a rental car. Each member has already been approved by MyCars which eliminates the time consuming paperwork that comes with one-off rentals.

Selected rental car companies will be able to list their fleet on the app, and these cars will be parked at different ‘hubs’ in Dubai and Abu Dhabi for users to share (the platform does not include a carpooling feature). 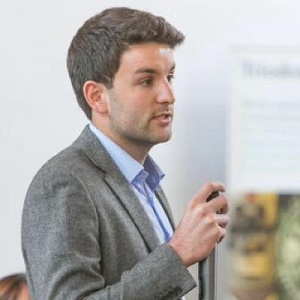 Pullen told Wamda they'd had requests from two of the biggest towers in Dubai to locate electric and hybrid MyCars hubs there, and earlier he'd said they were targeting the Jumeirah Lake Towers development as the first location.

The plan is then to work with real estate developers to make having a section of parking available as a car sharing hub - particularly one installed with electric charging stations - a must-have for investors.

They plan to launch in June with a 50:50 ratio of electric vehicles (EVs) and petrol cars. Pullen told Wamda they were seriously negotiating with one rental car company to supply cars.

He would not specify which but a possibility is Green Car Rentals as it claims to be the only hybrid and electric car rental company in the region; he also said UAE conglomerate Al Futtaim's announcement that it will bring the Toyota Prius Hybrid to Dubai meant they "can get our hands on some ready for launch".

He said the startup was aiming to be making revenue of $10 million from 200 cars in Abu Dhabi and Dubai by 2018. Furthermore, they plan to be making a profit by early in the second year of operation, based on a “conservative” car utilization rate of 20 percent, or where each car is being used for at least five hours per day.

The use rate compares to that of ZipCar, for example, which now aims for a usage rate of 50 percent or 12 hours a day for each car. MyCars is aiming for a 40 percent utilization rate.

Ecofriendly is the driver

The case for electric vehicles is key to the MyCars concept.

The stats, Pullen says, back their idea: there are over 540 cars for every 1,000 people in Dubai and World Bank data ranks the UAE as the seventh highest per capita carbon emitter in the world, making car sharing environmentally essential.

“We believe that there’s a rising problem in the UAE,” Pullen told Wamda. “By bringing electric vehicles to the region we reduce our carbon footprint and reduce some of the pollution that we see in the cities as the cities expand.”

Although there has not been much private demand for electric vehicles in the UAE yet, the way to encourage people to switch to electric cars was through exposure.

“In Europe it makes economic sense to buy an electric vehicle but still the adoption isn’t as high as you want. One of the reasons is because users don’t have exposure to [them] - they haven’t tried one,’ he said. “We believe you can stimulate demand by giving exposure to electric vehicles and that’s something MyCars will do.”

The goal is to offer a completely electric fleet by 2020, something that is not possible right now because electric cars are not widely available in the UAE yet. 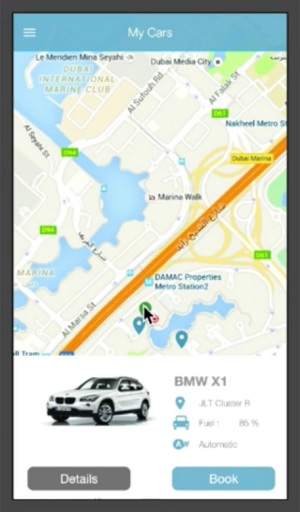 “We want to attract all user types to our car club. Once started we will be using smart tactics to nudge, influence and woo members to drive electric vehicles. For example, during low demand periods we can offer our members lower rates for electric vehicles.”

From EV to AI

The kind of data that MyCars intends to collect on driver behavior, desires and needs will enable it to be at the forefront of what is considered to be the next era in driving, as well: the self-driving car.

Pullen said their technology is ultimately an enabler to help people get “from A to B” without having to own a car, and as such they would be in a good position to introduce self-driving cars when those eventually become functional.

The UAE is already looking into the possibility of using self-driving cars for the World Expo in 2020, and a statement from vehicle marketplace Carmudi last year estimated that self-driving cars could be a reality for normal road use in the state by 2027.