The equation is simple: operational technology + information technology = the Internet of Things, the fusion of everyday ‘things’ with technology, says Rod O’Shea, Intel’s regional director for Europe, the Middle East, and Africa.

O’Shea was musing on the concept the Internet of Things, or IoT for short, in a presentation on smart cities at the IoTx conference in the Dubai World Trade Center on June 8-9. It’s this equation and its impact - real and potential - on the Middle East that drew crowds to the conference - the first in the Middle East to explore the possibilities of IoT, which has become more and more important to our daily lives.

IoT describes the system where everyday objects - such as your pet feeder or your car - can communicate with other objects and carry out everyday tasks without any human interaction. (Click here for a Wamda infographic on the opportunities of IoT).

In a space the size of a football field, startups including Short Point, KinTrans, Internsme and MENA Commerce stood side by side with global technology giants such as GE, Huawei, Dell, Intel and Cisco, to exhibit their contribution to the growing Internet of Things world.

Dilip Rahulan, CEO of Pacific Controls, told the crowd that the internet has given people a tool to connect in ways they’d never dreamed of. But he believed IoT would take us far beyond to actually become part of a living, online global nervous system in ways we’d never before thought of.

Pacific Controls has worked intensively with the Dubai government to help it develop its Smart Cities project, an initiative launched in February designed to use technology to improve residents’ lives. 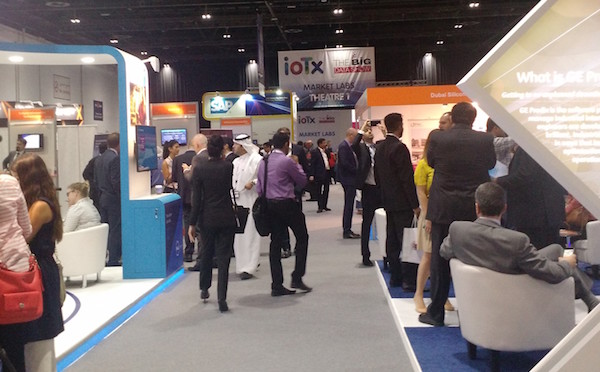 The IoTx exhibition that accompanied the conference (Image via Pamela Kesrouani)

Intelligent urban spaces were a key theme of the IoTx conference, with Dubai held up as an example of how to ‘connect’ a city to the digital grid.

Dubai’s leadership on smart cities has made it a physical lesson in how to build an intelligent urban space, or retrofit existing spaces into connected ones.

Cisco UAE managing director Rabih Dabboussi said the world had entered the era of digital transformation and Dubai was a model for futuristic cities, especially as it’s succeeded in providing the basic conditions for building a smart city. These requirements are visionary leadership, a holistic approach, meeting global standards, smart regulations, private-public partnerships, and a robust ecosystem.

Dabboussi said the availability of these factors led to positive economic and social results, as well as to sustainability.

Claus Hansen from Hewlett-Packard believed IoT would enable the creation of future cities through “connected places”.

Speakers at the conference agreed the Middle East is still only an emerging IoT market, fed by telecommunications and other smart initiatives.

But an IoT boom will come from an active entrepreneurial ecosystem as well as a drive for innovation, said Dubai Internet City managing director Majed Al Suwaidi.

Suwaidi was speaking on how entrepreneurs can use IoT to add-value to their businesses, and saw Dubai as an innovation hub. It ranked first in the MENA region in the Global Innovation Index for 2014 and emphasized the importance of collaboration and partnership with global IoT companies, who could provide the needed infrastructure.

“Dubai is an example of the way we use IoT opportunities to help achieve (the city’s) vision of turning it into the smartest city in the world,” he said. “Innovate or become irrelevant... Innovate or you won’t have any connectivity with today’s world.”

O'Shea saw new generations being born who are ‘connected’ as they’re surrounded by technology. He expected that the emergence of more mega-cities would equate to a stronger need for better communication tools, thereby forcing the development of the resources and devices used in our daily life.

GE, a Wamda partner, used the summit to discuss its Predix software. Predix is an open source platform designed to access and analyse huge volumes of data generated by machines, such as locomotives or factory equipment. The software then transforms that data into usable bites that humans can use to monitor, remotely diagnose issues, and increase efficiencies. It’s part of what GE calls the Industrial Internet – essentially, the Internet of Things for industry.

“The Internet of Things is a game changer for both industry and consumers. It will reset the boundaries of manufacturing competencies and drive unprecedented levels of efficiency. GE sees tremendous potential for Industrial Internet to bring about transformational growth in the region, across multiple sectors, including power, water, healthcare and aviation,” said Nabil Habayeb, GE president and CEO for the Middle East, North Africa & Turkey.

During the IoTx Hackathon

County of San Francisco chief information officer Miguel Gamino spoke about the importance of open data to the development of IoT.

San Francisco was the first city in the US to have an open data policy, a prerogative that’s been standing since 2009.

He believes this strategy, combined with technological innovation, has contributed to companies being able to disrupt a number of industries such as Netflix in communication and entertainment, Uber in transportation, and the Khan Academy in education. He said the open government initiative had increased transparency and reinforced technology skills within the administration.

“Connectivity will change the face of the earth as we know it,” Gamino said, adding that it would be the main driver of radical social change of creativity in innovation.

He said high-capacity, widespread connectivity would lead the new wave of progress and growth, hand in hand with innovation.