Karl Feilder believes he’s designed the first biodiesel system in the world that really works, and is willing to explain down to the nub how he's done it.

During an interview with Wamda, he said the foundation of his success was by re-engineering the traditional system of biofuel production to focus on city-level supply and demand, using waste cooking oil.

“Our model has completely deconstructed the biodiesel industry. What we should be doing is producing relatively smaller quantities of biofuel where the feed material is sourced locally, where the production is local and the consumption is local,” he said.

Feilder is sharply critical of what is holding biofuels back more generally in the region - it’s not subsidies; it’s a lack of education and too much conventional oil - and around the world.

Globally, most biofuel comes from crops such as corn or rapeseed, and the three top producers are the US, Brazil and then China. Although the sector is expected to grow rapidly over the next decade, international trade in biofuels is not expected to because of issues such as increasing consumption within producing countries, anti-dumping policies, and ethical issues around the extraction of palm oil.

Feilder says the global biofuels sector is "broken" because industries such as those in the US and Europe rely heavily on government subsidies to maintain high production rates, and claims "the only people who've actually got it working properly is us".

Wamda: How is the industry broken? 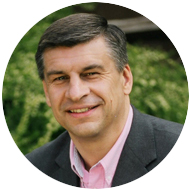 The model that has run for the last 30 years is to try and mimic the crude oil industry: it doesn't matter where the oil comes from as long as you can put it on a big ship and transport it halfway around the world. You can build your refinery somewhere on the coast and you load the finished product into big fuel tankers which then distribute that fuel all over your country.

They mimic that model in biodiesel and it doesn't work, because by the time you’ve transported the oil halfway around the world it's very expensive as a raw material - a lot more expensive than normal crude oil.

The biodiesel refining process doesn't have much of a benefit of scale and if you have a huge refinery you can only sell in huge road-tanker sized amounts, typically about 33,000 liters. Then the only people you can sell to are oil companies who buy at very low prices, who then blend it with mineral diesel and sell it on the open market, because a regular joe running either his own vehicle or a small fleet of vehicles has nowhere to store 33,000 liters.

Wamda: So the current model is for big-business only. As a small player, what is your business model and how is it different?

Feilder: This is what we call city-level biodiesel production.

What you need to do is to source the raw materials cheaper and the easiest way of doing that is to source it from waste material. You also need to put your refinery somewhere close to restaurants. Any city with a population of more than a few million people is capable of producing enough waste oil, processing it locally and selling it to municipal vehicles and anyone else who cares about the environment.

Wamda: What, then, is holding biofuels back in MENA?

Feilder: The first challenge that we have is a lack of education. When you go to the guys who sell the trucks, the buses, the generators in this region, they're pretty unaware of what biofuels are all about.

Secondly for nearly 50 years in many Middle East countries you basically just have to stick a hole in the ground and out comes oil. It's almost as if putting that in your engine, after it’s been refined, is normal. Taking waste materials from a kitchen and processing it by chemical changes into a synthetic fuel is bizarre and people don't understand it. They say this is what you cook potatoes in, how can you put that in your engine? Surely it's going to cause a problem. It seems alien to them.

Wamda: Why did you start in Dubai?

Feilder: Dubai has the highest price of diesel of any of the Middle East countries and diesel [although not petroleum] is effectively unsubsidized. 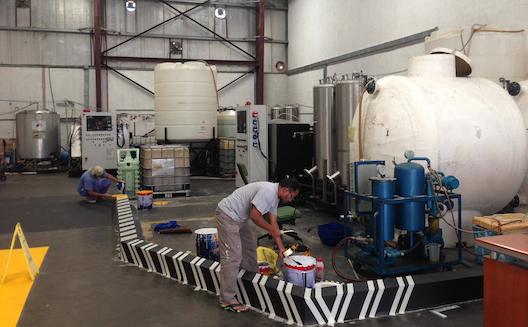 Workers in the Dubai factory, emptying collected oil from the containers into the digesters.

Wamda: How much does your biodiesel cost to produce?

Feilder: Typically it would cost about 20 cents per liter in chemicals and energy to process good quality waste oil into good quality biodiesel. That doesn't vary very much with volume.

Between 40 and 60 percent of the price of a liter of biodiesel is the price of the oil that you're using to make it.

So if things are going really well, if you got the oil for free, you could produce biodiesel at about 40 cents a liter.

Wamda: How does Neutral Fuels source and deliver the oil and final product?

Feilder: While trucks deliver fresh food to hotels and restaurants, they collect the waste oil at the same time. The oil is in a totally sealed container that we've mechanically and biologically tested is safe to carry the oil in and keep it segmented from the food. They come to our factory on the way back to the warehouses to refill, and while they are at our factory they drop off the waste oil, pick up new, clean containers and we refuel them.

In Dubai the advantage is that our factory can refuel them very quickly. The average waiting time for a truck to refuel at a normal filling station is about 15 minutes and sometimes it can be over an hour, whereas we can refuel them at an average of four minutes.

Wamda: What are your future plans?

Feilder: We want to supply more in Dubai. We've been working with the federal standards bodies of the UAE to try to get them to mandate that all fuel should have a percentage of biodiesel. We're shooting for 5% biodiesel in all diesel [as in Europe].

Our geographic plans are to franchise it out across the Middle East and partner with suitably qualified people who understand and fully believe our city-level biodiesel and production methodology.