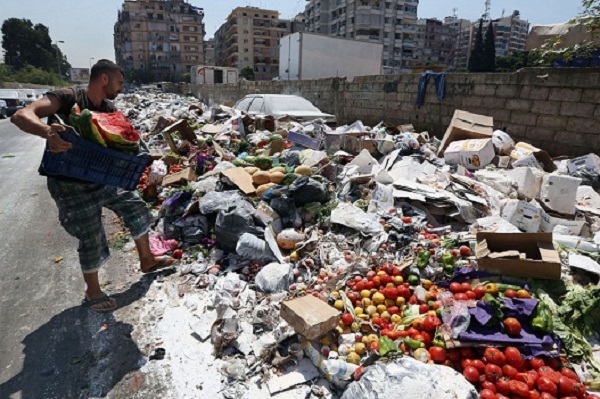 With the Naameh lanfill closed, trash has piled up the street. (Image via National Post)

The piles of garbage in the streets and alongside the river in Beirut have left the door open for creative entrepreneurs and organizations to offer solutions.

Kassem Kazam is one such entrepreneur. The computer engineer is taking aim at two longstanding issues plaguing Lebanon: unemployment and rubbish.

Launched on October 30, Recycle Beirut aims to employ underprivileged residents to pick up and sort recyclable waste in the Beirut and Mount Lebanon areas.

“The idea is to have homes and businesses registered with us, and every two weeks or so we pass by and collect the sorted trash,” Kazam told Wamda. He and his partner, who chose to remain anonymous, have been working their idea for some time. “We’ve been working on this idea for two years, because we were convinced that recycling is something that should just happen in Lebanon.”

Their initiative couldn’t come at a better time. Mounds of trash quickly piled up in the streets of Lebanon and Mount Lebanon after the Naameh landfill was shut down in July, more than 12 years late. Protests quickly erupted when it became clear that the government was unprepared to deal with the issue.

The partners in Recycle Beirut currently have a waste baling machine (for mechanically compressing recyclable waste), and two other machines on order for their warehouse in the Jnah area of Beirut.

One waste management method of many

Recycling is one of many ways to manage waste, and some areas in Lebanon are catching on.

"Lots of municipalities have begun to do these techniques,” said Najat Saliba, associate professor in analytical chemistry at American University of Beirut. “We're not inventing something radically new here. All this is available on the internet."

Saliba was speaking at an AUB conference on waste management solutions and technologies for Lebanon on October 29. 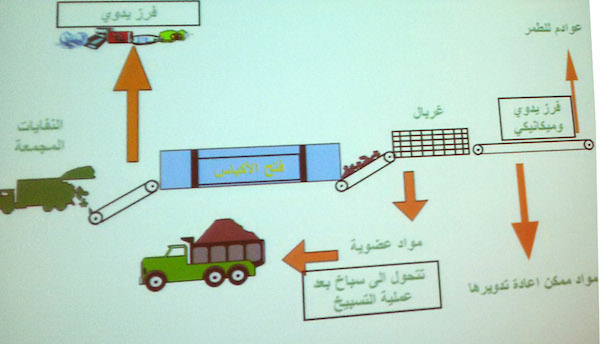 A diagram of the waste management process that Merhebi presented at AUB. (Images via Maysaa Ajjan)

“The important thing is to begin,” she said, addressing the crowd of activists and officials. “[Municipalities] need help in composting their waste, and we're ready to back them up with all our technological resources."

"Waste should ideally arrive pre-sorted to factories, but this is not the case in most times," he said, noting that 100 tons of garbage can cover about 300 square meters.

Once sorted, waste bags are opened, and materials such as plastic are compressed or cut to reduce their volume.

Organic material is separated from non-organic waste and composted.

Compost has numerous useful applications in industries such as agriculture and energy generation. Biogas produced when biodegradable material is broken down in the absence of oxygen can be burned to generate electricity and heat, or can be processed into renewable natural gas and transportation fuels.

The final step is to separate recyclable materials before dumping the rest in landfills.

"In an ideal situation we would have 10 percent of the final waste going to healthy landfills," Merhebi said. “There is no escaping landfills. But today [in Lebanon], 20 percent of waste is sent to composting, and the rest is going to (unhealthy) landfills." 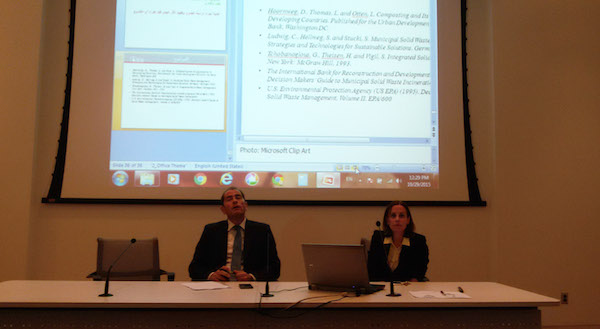 But what about incinerators?

"People think that incinerators are scary and polluting, but scientifically, all big countries in Europe depend on waste-to-energy, where 30 to 40 percent of their waste is used to produce energy,” Merhebi said. "Currently we have 0.5 megawatts of electricity generated at the Naameh area, but of course, that's not enough."

Leila S'oud, professor of science and environmental management, presented three roadmaps for waste management in Lebanon based on population densities.

Less than 10 tons of trash daily can be processed in a 50 to 200 square meter facility staffed by six to eight employees, and yield 2.5 tons of recyclable material with 3 tons going into landfills every day. This scenario is estimated to cost $356,000 to $425,000, and is suitable for small villages.

Around 30 tons of trash daily can be processed in a 2,500 to 4,000 square meter facility employing 12 to 14 workers, and yielding 7.5 tons of recyclable material and 10 tons daily for landfills. It has an estimated price tag of $1.2 to 1.5 million. One such facility can handle waste produced by several municipalities.

“We’ve already started working with municipalities to raise awareness among [the] community,” S’oud said. “You cannot work in environmental management without any idea of a technical background, and without knowing the [technical] choices you have.”

But awareness is not enough, she said.

“We need a voluntary program and economic incentives and disincentives. This is where municipalities can step in. They can impose regulations and policies to regulate the sorting and reducing of waste among citizens. This is crucial here, and if not taken, we’ll be stuck where we've been for the past few decades.”

Kassem Kazam and his partner in Recycle Beirut are ready to begin.

“Our plan is to handle 5 tons of [waste] per day,” Kazam said. “They include plastic, paper, cartons and metals.

“In the coming two months, we can hopefully employ 10 to 15 people, responsible for sorting and pressuring, and supervising the warehouse, picking up the trash drivers and other outdoor activities,” he continued.