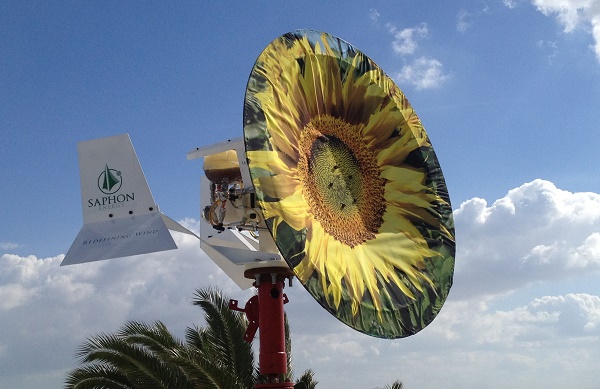 For the last four years, Tunisian company Saphon has been working on finding an answer to one of the world’s most pressing issues, power, and is now almost ready to launch.

Half a decade ago Anis Aouini had the idea of a blade-free wind turbine that, he said, would be 2.3 times more efficient than older models and safer for environment. He linked up with Hassine Labaied and they’ve turned the idea into a Microsoft-backed prototype.

On Friday, they gave international journalists, Tunisian ministers, and Microsoft officials a demonstration of their first industrial model, the Saphonian, at a villa at Raouad Plage, Tunis, where an operational version of the Saphonian is installed.

“The idea with this event was to unveil the industrial version of the Saphonian which marks the transition from the R&D phase to the commercialization and growth stage,” he told Wamda before the demo.

Ever since its launch in 2012, the Saphonian has piqued the curiosity of many experts and media, including BBC, NPR, France 5, and The Christian Science Monitor, and yet, Saphon rarely showed the still-in-progress technology.

With this demo, the Saphon team proved that they had indeed developed a revolutionary technology that answers most issues wind power has faced.

Thanks to its 3D kinematics (motion in a 3D space without regard to the forces that cause the motion), the machine was twice as efficient as a size-equivalent conventional turbine, Labaied said.

The machine is also 50 percent less expensive than wind turbines with blades, because they replaced the most expensive components, such as the blades and the speed multiplier, with a sail and hydraulic system, and because the team has streamlined the production process.

Since it doesn’t have blades, it doesn’t create noise pollution, doesn’t endanger wildlife, and doesn’t look as ugly as traditional wind turbines.

The Saphonian, which is fixed on a 8.5 meter high mast, has “a unique movement, it giggles, like an oscillating disk”, said Labaied. “We can even call it the ‘dancing dish’.”

Thanks to its powerful sensors, the Saphonian collects and monitors data in real time. The team has developed an app called “Maraya App” which allows users to efficiently generates predictive analytics and manage their wind farm.

Ready for their first clients

So far, the startup has been funded by two Dubai-based business angels, but to go further they will need to raise VC funds.

The team has been focused on bringing this invention to life and have almost been in ‘stealth mode’. However, even without any marketing, curious media have given them some publicity and as a result, clients have approached Saphon and the founders have some early leads.

Potential customers are an airport in the US, and an infrastructure bank in India, which has bought 50 turbines and is planning on opening the first Saphonian wind park.

“Since we hadn’t unveiled the machine, and how it worked, a lot of things were on hold. We believe that with the video and the media coverage, we’ll be having high-level discussions with partners to get to the next phase,” said Labaied.

Among those partners is Microsoft which has been backing the project for over a year and which could strengthen its support.

The team is not in a hurry though.

“After four very intense years of R&D we’d like to breath a little. We’ll start the next phase with a lot of positive vibes,” he said.