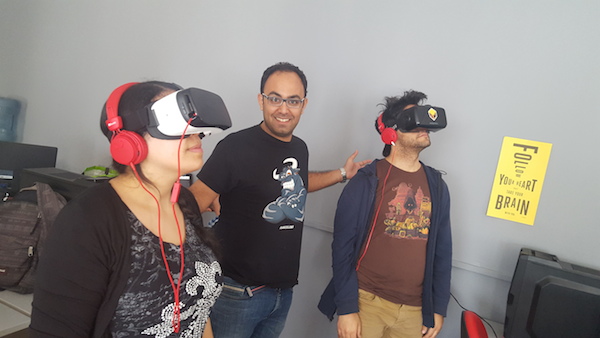 VR is fun but you've got to be careful, says Walid. (Image via Digital Mania)

The attraction between virtual reality (VR) developers and investors is growing.

According to a 2015 report from market analysts PitchBook, as much as $4 billion has been ploughed, globally, into science technology in recent years (although $2 billion of that was Facebook’s 2014 acquisition of Oculus Rift).

With a particular soft spot for VR, venture capital firms are keen to get involved but where they will make their money back is still a question.

Currently, according to the CEO of Tunis’ gaming development studio Digital Mania Walid Sultan Midani, it’s by creating products for brands - especially in a region where getting your hands on the hardware is a trial.

AR is not VR. They are different technologies. In augmented reality (AR) you put a layer on something existing, that’s why it’s ‘augmented’, you take a reality and put something over it. With virtual reality you are totally in something else. Then if you imagine the highest level of AR, that level joins the first level of VR, when they start touching we are then starting to talk about a ‘mixed reality’.

Ivan Sutherland is important. Well, to me at least. He built the first real immersive experience and he made it in a time when the technology wasn’t what we have now. It was mechanical, it was real electronics. Then he upgraded it to be electrical. Creating technology is good but creating a platform, or phenomenon where a lot of people can create amazing experiences on it, is just amazing and he deserves a lot of respect for that.

Sounds are key. Total immersion cannot happen without a very nice soundtrack. People who want to create something on VR should remember not to spend all their energy on the graphical stuff - 50 percent is the sound.

VR is not a market here. In Maghreb, or MENA, virtual reality is not a market. Let’s not be disillusioned. The consumers are brands who want to make something different when they’re at a fair or they’re sponsoring something. I’m sure something is coming in the region but this is being impeded by a lack of hardware - it is not that available.

Lack of hardware holds us back. As a developer we’re [the region] struggling to get the hardware. You can’t just go to a shop and buy it. The public version [of Oculus Rift] has recently been made available and you have to order online and then you have to wait six months. They [Oculus Rift] don’t ship to Tunisia. So, even as developers we don’t get the chance to be prepared for whatever the market is creating. It’s a big issue we have with that part of the world [US]. If we were there things would be different. I’ve gone through the ordering and collecting from someone in Europe process three times now. And it’s not a matter of money but the time wasted.

The VR ocean is blue. Right now the VR industry is a mostly fish with only a few sharks. But there will be sharks coming soon. For now the sharks are hardware manufacturers for apps and games and we can quickly be in the first the first bunch of VR developers when the new platforms will be out. I'm building with my team as a peaceful whale.

Tourism is one future for VR. We can use VR to revitalize something we already have. And for Tunisia this is definitely tourism. So, if you come to Carthage and you put a headset on, with VR or mixed reality, I can make you feel the life of a Carthaginian guy 2,000 years ago. As well as for educational purposes there is also the training of those in various fields, from medical to military.

Use VR with care. As a user you need to be careful of your intake of VR. In general people should moderate any kind of experience, from sports to studies to video games. We always advise users to have a balanced life between reality and virtuality. You have to be ethical about your development and wary of those who’ll use it in the wrong way.

VR won’t be a replacement in gaming. The classical ways of gaming, like consoles and PC, will still be popular, VR won’t replace them. [Gamers] want something simple so you’re not going to see simple games on that vertical, with PC it will be more complex for hardcore players, and with VR it will be about more sensory experiences. It will be there to fill a gap that people are searching for, the ‘feelings’ gap.