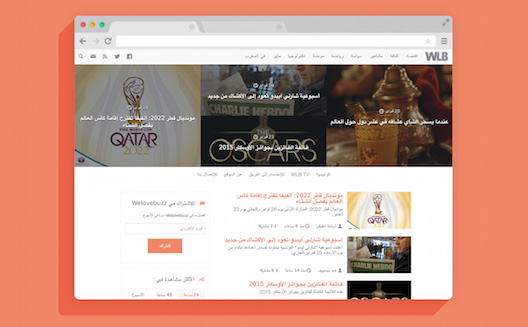 Young Arabs never cease to amaze us. After Ouedkniss in Algeria, EMC in Morocco and Saily in Lebanon, it’s now Welovebuzz, a Moroccan version of Buzzfeed created by teenagers that shows the early signs of a success story.

Welovebuzz began in August 2010 as simple blog in which Driss Slaoui and his friends shared videos they would have otherwise posted on Facebook. Now, they have 30,000 fans on Facebook, a freshly launched Arabic version and a monetization strategy unique in North Africa.

The secrets to buzz

“WLB has been existing since 2010,” explains Youcef Es-skouri, “but it really started to become a well-known brandwith real potentialthis year. We became the reference media for trendy and connected 18-25 years-old.” Numbers don’t lie; Les 10 endroits à absolument visiter au Maroc article (the top 10 places to visit in Morocco in English) has been shared over 40,000 times and the website gets between 30,000 and 200,000 shares every month, without doing any advertising. This success is due to four pilars, according to Slaoui and Es-skouri:

Now, that the audience is there, the team has started looking at monetization. During the second quarter of 2014, they tried classic CPM advertising but they didn’t managed to differentiate themselves from “viral brand content,” and chose to drop banner ads all together.

Viral brand content is custom content sponsored by a company.  The advertiser gives the editorial team a theme, and they start brainstorming ideas to find articles with a high buzz potential. Once the article is approved by the advertiser, the article is published on the website with a mention of the sponsor.

“It’s been existing in France and in the U.S. for some time,” explains Es-skouri, “but not in Morocco.” WLB is going further since they commit to a minimum number of shares instead of page views like people usually do.

Starting December 2014, the team knocked at six advertisers’ doors, including MDJS, Inwi, and Meditel, and all gave WLB a shot. Now that it has been validated the team plans to push this model.

Slaoui is the first to admit that Welovebuzz  caters to a niche: young French-educated Moroccans. The team has been looking to launch an Arabic version of their website for a while. They say it that they’ll reach more Moroccans, follow the success of other Arabic media - Hespress, the most widely read online platform in Morocco has now surpassed YouTube in terms of page view in the country – and offer a better product to the many Moroccans who read Welovebuzz without understanding the entire website.

Launching an Arabic version without tailor-made content or great editorial team in place was out of the question for the French-educated funding team. With Afaf Bouagada in control, they’re ready to launch Welovebuzz in Arabic.

Es-skouri doesn’t hide his ambitions. “one of our objectives is to regionalize the website” but it has to be done right. “You have to know what people like, and to know your market extremely well,” he said. “That’s why we will take our time.”

Managing a team of volunteers

Every since they launched, the website has been written by volunteers. There are 30 of them now, most of whom are under 25 years of age. To attract and retain those writers, the team had its obsession for quality to thank.

“Editors are happy to write for us,” explains Es-skouri, “because they’re proud of writing for Welovebuzz and to see their articles shared; it’s also a great line on a resume.” 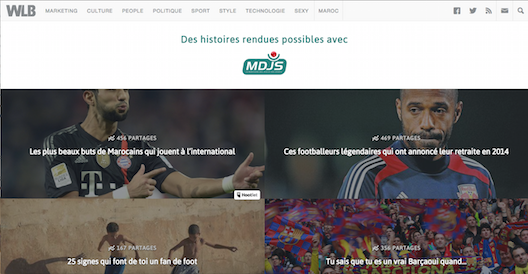 Part of the team during the GeekFtour 2014

There’s another important factor he adds: “they’re free to write about whatever they want, there is no limit,” continues Es-skouri. They can talk about sex, or about their passion as much as they want.”

Also, the team has a talent management strategy very different from that of other media. “We don’t have a hierarchy like elsewhere, everybody is heard,” explains Es-skouri.

Now that the money is coming in, the cofounders will be able to pay the editors. “We’re experimenting with a new remuneration model based on performance,” Slaoui said. “Editors will be paid based on how many shares and page views the article got.”

Soon, the two partners hope to hire some of their editors full time and to gather them in an office. But this will have to wait for Slaoui and Es-skouri to graduate. “And in a year, a lot can change,” smiles Es-skouri.