“Swipe up”, an Instagram term that has become so synonymous with online shopping that it is hardly considered an instruction or directive anymore. This ability to redirect consumers from a social media platform and directly onto a merchant’s website has become one of the subtle ways that online shopping has shifted over the past few years, empowering smaller brands and fueling the growth of direct-to-consumer (D2C) commerce.

D2C companies manufacture and ship their products directly to buyers without going through the middlemen of online marketplaces or traditional stores, enabling them to sell their products at a lower cost. Combined with platforms like Alibaba, Shopify and third-party logistics, this ecosystem of social media, e-commerce and fintech has enabled digitally native brands to easily identify suppliers and manufacturers, build a platform to sell, and target specific sets of consumers via digital ads.

Globally, the D2C model was pioneered by the likes of Warby Parker, an online retailer of glasses and sunglasses and Casper mattresses, who shunned brick and mortar retail and offered consumers niche products online, selling directly to customers who were acquired via social media platforms.

It is a model that worked tremendously well. D2C brands fast became unicorns, Casper managed to IPO, and large corporations provided a lucrative exit route with the likes of Unilever acquiring the Dollar Shave Club for $1 billion and Proctor & Gamble acquiring Native deodorants for $100 million, less than three years after it launched.

In the Middle East and North Africa (Mena), D2C is still in the earlier stages of its development, one fueled by the rise in e-commerce. In a recent report published by UK-based fintech checkout.com, 53 per cent of consumers in the region said they are doing more of their shopping online compared to pre-Covid levels, a rise of 8 per cent when compared to consumer responses in 2020.

“Consumer behaviour has shifted dramatically towards an online-centric one. Customers who used to shop offline now went online,” says Mo Ali Yusuf, regional manager at checkout.com. “We have also seen a massive shift in traditional retailers who have also gone online. Around March and April [2020], we had an influx in demand, we had over 1,000 merchants reaching out, many of them were traditional retailers who said they really had to have online presence and a digital offering. From fashion to general retailers, makeup and grocery, everybody wanted to go D2C.”

This demand for online shopping shows no signs of waning. The region’s e-commerce sector is one of the fastest growing in the world and is set to be worth $48.6 billion by 2022 according to Visa. Social media is set to play an evermore important role in this growth with 20 per cent of Mena consumers saying they shop online within a social media app, compared with 8 per cent in China and 3 per cent in Singapore according to the checkout.com report. Most social media companies have integrated online shopping onto their platforms, whether it is directing users to a brand’s website or purchasing directly on the platform. Most recently, TikTok partnered with Shopify in Mena, to allow its users to “swipe up” and buy the products they see in the videos.

“It connects users with brands in the region, making it easier for merchants to run campaigns directly on TikTok,” says Aref Yahia, head of retail and e-commerce at TikTok Global Business Solutions, who describes the partnership as part of TikTok’s “community commerce” approach, which helps to build up trust among consumers.

For Maria Eduarda Becker Pavani, founder of Tres Marias, social media platforms are vital for her coffee roastery business. The company was founded just before the pandemic, with the intention of it being a B2B coffee supplier.

“When the pandemic started, we started a Shopify account and started pushing on Instagram,” says Pavani. “In the first month, we understood the potential of e-commerce of coffee. In the Middle East, social media is important, you have to be consistent in posting, you have to be creative, it would have been much harder and taken us longer to reach customers without Instagram and Shopify.”

The use of social media not only increases brand awareness and customer acquisition to build an online community, it also establishes a clear line of communication between company and customer.

“The main advantages of D2C is that you have direct access to customers, make improvement on your product based on customer feedback, and importantly, own your customer data. When you are dealing through a marketplace, you do not know who the final customer is, so you cannot use this information to refine your product. D2C allows you to do a better job and ensure the customer is happy,” says Anass Boumediene, co-founder of UAE-based eyewa, an online retailer for contact lenses and glasses.

While D2C is still booming in the region, elsewhere, the landscape is tainted with difficulty. Casper’s IPO has been described as a “nightmare” with its stock trading at $4 today, down from its debut of $12. US-based Brandless, a Softbank-backed platform which raised $290 million closed down in February last year citing increased competition and an unsustainable business model before being acquired by Clarke Capital Partners and the platform’s new CEO, Ryan Treft. Analysts have also accused Procter & Gamble, which has acquired several D2C brands of downplaying the importance of D2C in investor calls.

Part of the reason is the rise in competition – more and more of these D2C have emerged across the world, taking advantage of globalised supply chains to offer shoppers greater choice. Even bigger brands like Nike and Coca Cola have shifted to D2C, proving to be a hefty competitor with strong brand recognition and deep marketing pockets.

“Building a D2C firm became so easy, it made the space extremely competitive. If you come up with a product idea and start selling it, suddenly 10 other brands appear selling the same thing, they even go for your same manufacturer and out-advertise you on Facebook, so it becomes a race. The only companies that benefit are the platforms,” says Imad El Fay, partner at HB Investments.

This has led to a substantial rise in customer acquisition costs (CAC) across the board. The CAC for e-commerce brands in clothing, shoes and accessories space is currently $129 according to Shopify and $462 for furniture brands. Recent changes in Apple’s iOS 14 privacy agreements makes it difficult to target consumers with specific ads, effectively severing a crucial aspect of the D2C social media strategy. Meanwhile, VCs have generally become less willing to fund companies that prioritise growth over profitability, especially in such competitive consumer markets. 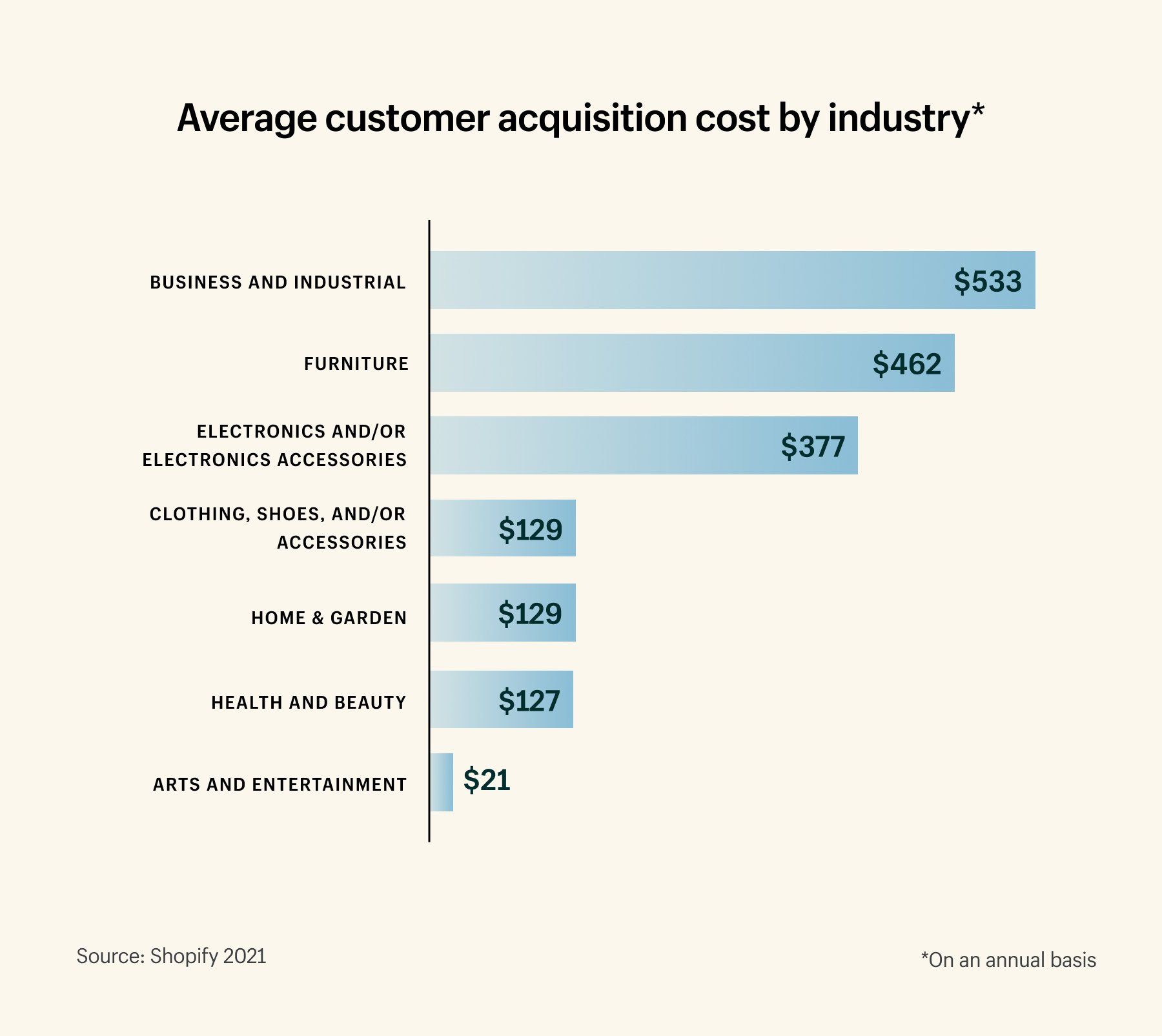 “To sell a product to consumers, you need to convince them. Initially they need to be aware of your product, then consider buying it or replace their current preference with it, then they need to buy it. Generally, it is not easy. You need to reach them through a combination of channels, including digital ads, influencer partnerships and other forms of advertising. This requires a behaviour change,” says El Fay.

The economics of the e-commerce model are difficult, especially for smaller brands who also face cashflow issues.

“Most of D2C’s biggest challenge is supply sourcing. Being a small brand, you are not able to go to a good manufacturer and ask for a small quantity with good quality,” says Shady Mokhtar, co-founder of Egypt-based clothing brand Opio. “Scalability and growth are other issues as well.”

Most manufacturers expect 50 per cent payment upfront before they start manufacturing a product and the rest is paid upon delivery, so brands have to pay the entire shipment before they sell anything, putting “a big cash strain at the beginning, even if the business is profitable,” says El Fay.

“Between paying for suppliers, freight companies, branding agencies, marketing and fulfilment. A lot of money gets lost in the journey, and these businesses face an economic issue, their models are much more optimistic than they realise. They do not have a lot of expertise in finance and management,” he adds.

There is however, a way to make D2C work according to El Fay.

“Bootstrapping is much more effective than raising outside money, which has proven to force companies to go and spend it uneconomically to get consumers. If you look at companies that bootstrap early on, they manage to grow slowly by focusing on unit economic or cashflow, they are making sure that in every stage they are making money,” he says.

Listing on marketplaces can also work to serve digitally native brands and expand their reach, while the rise of e-commerce buyers like Opontia can also offer an exit route for D2C brands.

“D2C is not a strategy per say, it is a channel. A lot of brands realise that the likes of Amazon and Noon can be a great way to acquire customers, because customers trust them, and a lot of customers go first to them if they are looking for a product,” says El Fay.

Globally, D2C brands are beginning to adopt an omnichannel approach by traversing into brick and mortar stores, a strategy that could suit regional players as regulations for cross-border trade in Mena can present challenges for market access and scaling for e-commerce brands.

The process of expansion in Mena is “complicated” according to Boumediene who highlights differences in regulation, currency, VAT and customs across the region.

“From a macro level, if we want businesses to do better and facilitate intercountry commerce and shipping, it would be great to have a more uniform relations across the GCC towards e-commerce. This is the main advantage of Europe and the US, that you have a very easy access to large populations. We have a large population here across Mena, we have common language, but we have different regulations, laws and customs. This slows down the expansion of companies,” he says.

For eyewa, establishing a physical presence in Saudi Arabia was one way to circumvent the challenges in expanding as an e-commerce platform. The company launched its first physical store in Dahran last year and opened another nine in the country as well as two in Dubai with plans to open 100 outlets across Mena by 2023.

“We realise a lot of customers still prefer to shop offline, and if we remain only online we will not get access to them,” says Boumediene.

While e-commerce will continue to boom, online sales only account for about 20 per cent of total retail sales globally, and for brands to truly scale and expand, an omnichannel approach may still be necessary.

Wamda is an investor in eyewa