While the events of Tahrir Square have irrevocably opened the door for economic policy change in Egypt, the transition has, in the short-term, favored companies that focus on a global market. Cairo-based IT services company EPIC Systems, for one, was able to shield its business from local economic fluctuations by selling software abroad. Yet, as founder Hisham Abdel Maguid revealed, the choice to sell overseas was made out of necessity, since selling specialized products, such as a five dimensional data visualization package Trend Compass, proved near impossible in a local market.  Given the wave of optimism and gradual reform sweeping the country, however, Abdel Maguid notes that the time to focus on purely local product may finally be at hand.

How did you come up with the idea for Trend Compass? When was it developed?

Hans Rosling, a Swedish professor, created a nonprofit organization called GapMinder, while doing research for the U.N. After having difficulties explaining the data, he and his daughter came up with the idea to remove the variable of time from the x-axis, and put it in the background, creating a unique kind of graph. Google then bought the idea from him and essentially put it in a drawer. We were approached by a customer who was interested in using GapMinder’s functionality but wanted his data to be confidential. So we began developing Trend Compass in 2008. It took us 1.5 years to debug it, tweak the user interface, and add geographical localization.

How do you compete with Google: Visualization: Motion Chart, which was released in late 2008? What is your business model?

We sell Trend Compass as proprietary software. Our edge is offering confidentiality. Only individuals use Google for free; most companies don’t want to share their data with Google. After a one-time charge, you can download the software and do whatever you want with it, including easily embedding graphs in PowerPoint, AVI & HTML. We are adding a statistics package soon as well. Our exposure may not be as big as Google’s, but we have garnered several clients, including Deutsche Bank, RIM (Blackberry),  Vanguard Institutional Investor, Ipsos, and Princeton University, and we just completed a large deal with NBC Universal, who uses Trend Compass for their research team on customer behaviour & interaction on cable networks. 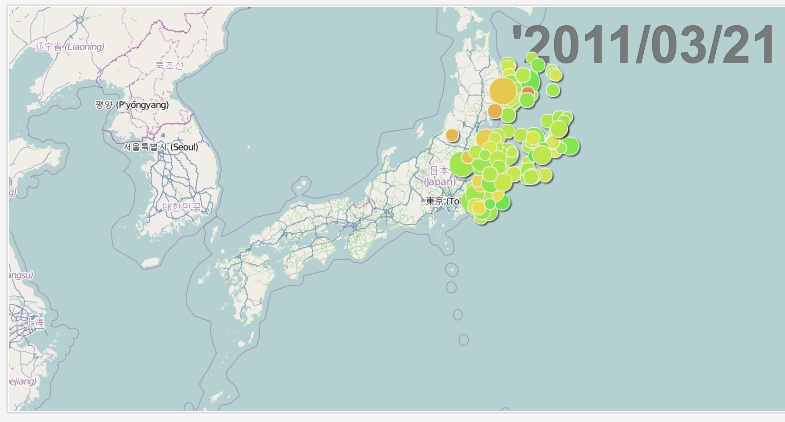 A Trend Compass example: The magnitude (radius) and depth (color) of the recent earthquake in Japan over time; see here for another example.

What are the biggest challenges that you have faced?

After working at IBM, I left the IT business about 15 years ago, because I realized that I was not innovating. If you come up with a new idea, then you are in business. Startup capital wasn't a challenge- I used my own capital. But marketing and advertising have been a big challenge. I wish I had bigger exposure in Europe and the States. I find it much easier for my product to move in those countries than in the Middle East. I haven’t sold a single package inside Egypt.

How did you form your team?

I found my partner through the internet. He had been arabizing Flash for Macromedia, which was bought by Adobe, and he was local to Egypt. It got my attention that someone was able to make such a deal with Macromedia. This is what I was looking for.

How much of your success do you attribute to having the right team, and how much to innovation?

I’d say our success depends 60/40 on innovation and team. Finding my partner was great, because he generates a lot of great ideas, but I add value by overseeing the implementation, because I know how to make a product good for the user and how to sell it. It’s all about creating a balance between a great idea and translating the idea into the real world.

How has the recent change in government affected your approach? Do you see new opportunities opening up? What new challenges?

Things will take some time to get back to normal. The upside is that the corruption is on its way out. Maybe once businesses will start incorporating more planning and research into their models, I might have local market for my product. I was hugely disappointed that I could not sell Trend Compass here.

Now we are developing a couple of new ideas aimed mainly at a local market: a decentralized database for pharmacies that offers real time access to prices and stock at each store, and an online 3D Virtual Reality shopping center (see the prototype). Because of the traffic in Cairo, it’s a huge hassle to go to the supermarket.  And often supermarket workers don’t have stock lists, so calling is a waste of time. This will make shopping efficient and more like an online game.

In general, there is a price for this democracy that will affect this country for awhile, but I have never felt as patriotic as I do now.