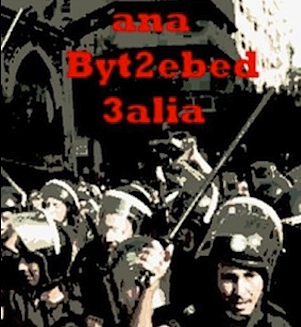 As violence comes to a boil in Egypt this week in anticipation of the first Parliamentary elections, protestors may want to take advantage of a new Egyptian mobile app that protects in case of arrest.

The app, “Byt2abad 3alia,”which roughly translates to “I am being captured,” alerts families (or lawyers) of one’s arrest by sending an SMS that includes GPS  information. It doesn’t require internet, and the interface is simple. Selecting a button saying “Byt2abad 3alia,” leads to a screen doublechecking, “Mota2aked?” (“Are you sure?”). If you select “Ah” (“Yes”), the app, which is available for Android and Blackberry, sends out a preset SMS with your location to specified contacts.

“The main point is that it’s really simple to use. You just press the button and it sends immediately,” says developer Badr Moharam. Provided a protestor can handle his phone at that moment, that is.

While riots broke out in Tahrir Square right after the launch of the app on November 19th, as protestors placed demands on the military complex to relinquish its control, Moharam started developing the app around three weeks ago, simply because “people were disappearing,” he says. “When you’re arrested here, you don’t get to make a phone call. People need to be able to send an SMS to their family that communicates their location. We have many different police entities arresting people, so if your friends and family know your last location, they can determine which entity was managing that area and can put pressure on the government to release you. Otherwise there’s little chance you will get released,” he explains.

While a similar Android app, “I’m Getting Arrested,” was created on November 15th for the Occupy Wall Street movement in the U.S., it didn’t include location information, Moharam points out. “This is a highly specific need in the Egyptian market.”

Indeed, the protests have been good for business. Since the Android app launched this past Saturday, with the Blackberry version following on Sunday, each have been downloaded around 400 times, he says, with users downloading the Android version 20 to 40 times in the first couple of hours. 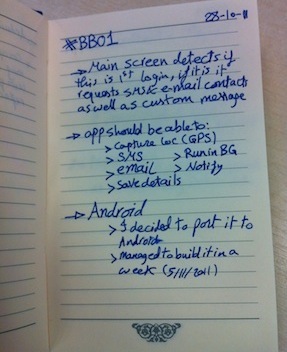 Building the app was not hard, says Moharam, but his biggest challenge has been creating developer accounts with Google and RIM. “To publish on the Android market, you need a U.S. credit card. So I had to get friend in the U.K. to lend me his credit card just so I could use Google Checkout to create a developer account,” Moharam recounts. This barrier critically prevents Egyptian developers from being more prevalent in Android app markets, he says, forcing them to develop apps for Apple, which has friendlier policies. Yet protestors prefer Android and Blackberry platforms for their superior security.

“I’ve been waiting five days for my Blackberry developer account,” Moharam says, “but because people wanted the app sooner, I posted it to a private server where they can download directly.” He’s now also porting the app to Nokia, a savvy move as Nokia boasts 80% of the Egyptian mobile market share according to iCrossing.

Has Moharam heard any stories of arrested protestors using the app? “Not yet. Hopefully people just don’t get arrested,” he notes dryly.

While Byt2abad 3alia may be making a splash, Moharam is not just focusing on arrests when it comes to serving the people. Another Android app, called “Dawayer Masr,” or “Egyptian Constituency,” helps voters determine who they will be voting for on Monday. “Right before the elections, they changed all of the constituencies we were used to,” he explains. “So I created an app that uses GPS to determine your new constituency. It also shows the other districts in your constituency, so that people can be fully informed about who their Parliament members will be representing.”

Echoing the general ethic of his mobile apps, Moharam advises, “people need to not just vote for themselves, but take the greater good into account.” 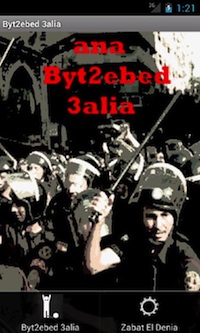 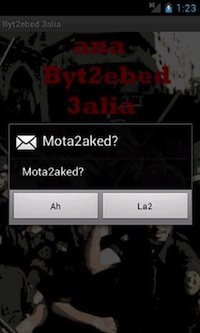 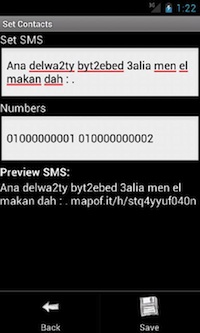