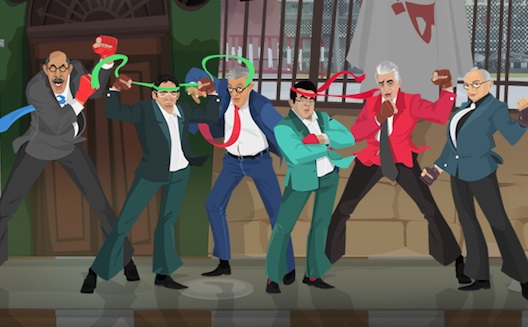 As voters continue to cast votes for the Parliamentary elections in Egypt today, streetfights have broken out between Egypt’s presidential candidates. Well, online at least. A game released by Wixel Studios this fall, “Masr 3ayza Meen?,” or “ّWho Will Egypt Choose?,” pits presidential candidates against each other, allowing players to fight as the future president of their choice and amass points to determine an overall winner.

To keep your finger on the pulse of popular opinion before the upcoming spring 2012 elections, you could follow the news. Or you could simply follow the game’s frontrunner. At the time of writing, former Nobel Peace Prize Winner Mohamed Baradei was in first place, with catch-all alternative President X following in second, and Amr Moussa, the former Secretary General of the Arab League, in third. Dignity party leader Hamdeen Sabahi was in 4th, Google executive Wael Ghonim  in 5th, judge Hicham Bastawisi in 6th, and El Ghad party leader Ayman Nour in 7th.

The game also allows users to amass more points by directly voting for a candidate via SMS or a phone call, even without playing. If players want to fight for a candidate who’s not currently an option, they can vote for alternatives, the winner of whom will become President X.

The goal of the game, which will be fully released this coming month, says Wixel Studios founder Ziad Feghali, is not to make money. Rather, the Beirut-based game development studio wanted to nod to Egypt's revolutionary spirit, encourage voting, and offer a space for Egyptians to express what they truly want.

“Jamal Mubarak said, ‘They're just kids playing online,’ in reference to the April 6th Youth Movement, yet being online was a big part of the success of the revolution. This is why we created a political game for Egypt. We didn't want to create something conventional, but we wanted it to give a virtual feel for what the Egyptian people want,” says Feghali.

It's not as representative as an election, however, he is quick to point out. “One person could stay playing all day or could send several SMSs,” thus skewing the results. But thus far, with 30,000 unique visitors and 40,000 pageviews since its launch on September 15th, the game is amassing a small but steady group of fans, who appear to be politically and socially active, judging by the site’s traffic patterns.

“How many players we have online depends upon whether something is happening in Tahrir or not,” Feghali laughs. “Some days we have 1000 players; others we have 120.”

But 92% of those players- almost 28,000- are coming from Egypt, with a handful coming from Saudi Arabia, Lebanon, and the United Arab Emirates as well. Feghali believes the results on Masr 3ayza Meen do reflect the opinion of the street, as most of the users are coming from "the political heart of Egypt," Cairo.

The game also comes at a time when the region is clamoring for authentic Arabic content. Referring to a comment that Ahmed Alfi, CEO of Sawari Ventures, made about the limited scope of Masr 3ayza Meen in light of the need for games that broadly reflect Arab culture, Feghali agrees.

“He’s right. Our game is timely, and it is topical. But that’s the staying power of our game. Creating such a specific game is not a strategy that we're following in general, but we're giving it a try. We’re experimenting in the Arab World what appropriate subjects are that truly reflect the current culture, besides Islam.”

With this point, Feghali touches upon a deeper question that game developers for one, certainly have not solved. What it is that makes Arabic content truly reflective of Arab culture? “Is it the language? Is it an ethnic quality? It could be poetry I guess,” he muses. “Or,” he concludes, “in all honesty, football would really draw them all in.”

But for now, Wixel Studios is focusing on supporting democractic transition in Egypt, while adding a dose of playfulness that speaks directly to the Egyptian spirit.