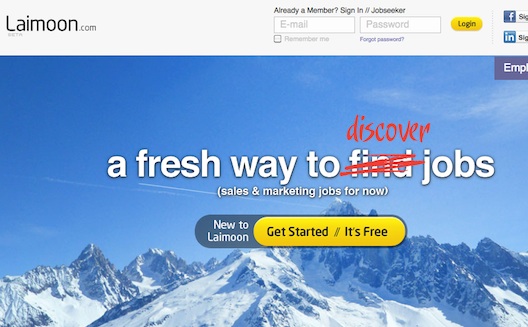 It's never easy admitting that you were wrong. To have to admit that you were completely and utterly amiss might make your insides churn like a smoothie in a blender, but I’m okay with admitting I was wrong about the region, because what I just learned chatting with Laimoon has shown me that there is real cause to celebrate innovation in the Middle East.

I’ve often supported the rise of me-too sites as a solution to the region's paltry presence online, even though it’s a lazy solution at best, and at worst an antidote to real thinking. But now I have the people at Laimoon to thank for proving me wrong. Innovation is alive and well here in the region where we are blessed with people intelligent and confident enough to create rethink existing business models.

Laimoon, the first company born out of an effort by Honeybee Technology Ventures, is a regional online recruiting site for sales and marketing professionals that blows away its competitors.

When you visit the site, the first thing that strikes you is its beautiful design. It has clean lines, ample white space, and fresh yellows that make Google's homepage feel crowded. Beauty is anything but skin-deep at Laimoon, for it's when you use the site as a recruiter or job-seeker that you begin to appreciate the power of the website and its business model.

The site was born out of frustration. While at Zawya, the team behind HBTVentures realized that for every job they posted they received far too many applications, most of which were irrelevant. They had a strong belief that this wasn’t just because they were Zawya, but because in such a dynamic job market, many candidates simply applied for any job they saw, as applying was pretty easy.

To test this, the team posted a job at HBTVentures, a then unknown entity, on the usual websites. They received applications from 600 job seekers, many of whom were unqualified. Worse still, imagine having to troll through 600 applications searching for diamond the in rough. It’s a system that’s unfair: recruiters will most likely dismiss many otherwise qualified applicants, while qualified applicants won’t receive a fair chance.

Laimoon understood this and decided to change all that. To do this, the team decided to focus on hiring sales and marketing resources by running them through a series of questions online, not dissimilar to a qualification call that a large company would make, but a little more rigorous. Applicants are forced to make tough choices before they are presented with a list of roles that Laimoon’s brilliant algorithm believes they are well suited for. It’s like receiving a bit of free mentoring!

And what’s a sales and marketing job application without doing some selling yourself? Here you get the chance to present a stand-out line, which appears as a blurb to the recruiter and allows you to break away from the fray.

Once presented with the list, the applicant can then apply to roles that they find interesting. It adds a new dimension to the job application process that extends beyond the mindless video-resumes and gimmicks employed by other job-boards.

So does it work?

Yes, absolutely. In fact, Jacob, the company's Market Developer, was recruited through the website. Rather than a deluge of 600 applications, the team at Laimoon received just 33 applications, from which they shortlisted 7 and finally hired one.

It's brilliant in its simplicity, but also in its design and functionality. The team had learned the value of transparency while at Zawya, and they wanted to ensure that their latest venture remains true to that concept. They introduced some simple notifications that let a candidate know when his application has been reviewed and another to let him know if the application has been rejected.

This is a simple yet useful feature that is present in many other sites and recruitment tools, but which often requires some human interaction.

The team at Laimoon, Ramy, their marketing guru, and Jacob in particular, were kind enough to offer some words of wisdom that an entrepreneur would do well to heed.

So, now that I’ve experienced Laimoon, I can't help but think of all other recruitment sites I've seen as nothing more than glorified classifieds pages that add little value and leverage very little of what the internet can do today.

Laimoon, thank you for bringing innovation back to the region!