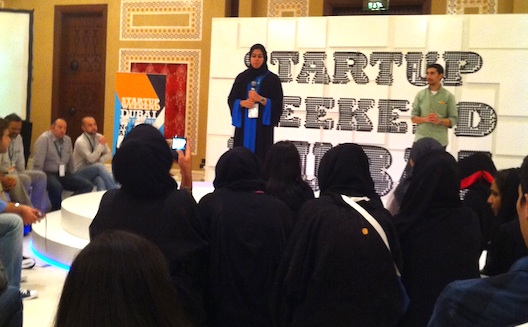 Last weekend, on October 20th, the first sparks of an entrepreneurial revolution were ignited in Dubai. More than 350 participants from over 800 applicants gathered at Madinat Jumeirah for the first Startup Weekend Dubai.

For those unfamiliar with the Startup Weekend concept, it’s 54 hours of intense brainstorming, in which entrepreneurs, designers, and developers come together to build companies. On the first night, aspiring entrepreneurs pitch their ideas, participants vote on their favorites, and teams are created. On the second and third days, teams build upon their ideas and create a prototype that they pitch to judges at the end of the weekend. With a powerful judging panel and over 24 mentors, Startup Weeked Dubai (SW Dubai) made this process a powerful learning experience.

While many Startup Weekends have cropped up in the Arab World since the concept went global last year, SW Dubai was notably swankier than most. Under the patronage of H.H. Sheikh Mansoor bin Mohammed bin Rashid Al Maktom, and with a slogan heralding “Make a job, Don’t take a job,” SW Dubai took place in a five star hotel conference room and featured three meals a day for all participants.

The grand feeling of the event was mitigated by a frank and entertaining opening address by Dan Stuart, the down-to-earth co-founder of daily deal site GoNabit.com (now LivingSocial UAE), which recently became one of the region’s largest success stories after its acquisition by LivingSocial.  Dan shared his personal experiences starting the site, and explained why being good at sales is a life skill and why it’s crucial to find the right partner for any venture. He emphasized the difference between “wanting to succeed” and “having to succeed” – the latter being a stronger motivator.

That first night, participants energetically pitched 65 ideas, of which 17 were selected to move on to the team building stages. Teams then worked around the clock with infectious enthusiasm.

In the end the three ideas that came out on top, receiving monetary prizes, were Golazo, Giftastic, and Hassle Free, which were uniquely very different. Golazo is an online community and location-based app for football aficionados in the UAE that enables the formation of teams for real matchups. Giftastic is an application relies on social media to help users pick the perfect gift for their friends. Hassle Free is a service-oriented start-up that helps UAE residents with all the pains of relocation within the UAE. They were each awarded cash prizes of 25,000 AED (~$US 6,800), 15,000 AED (~$US 4,000), and 10,000 AED (~$US 2,700), and the first place winner received one month of advertisement by Xpoze, while all of them received a year of incubation by SME and 2,000 worth of training by Potential. Several other start-ups were awarded with incubation, free consultations, and other monetary prizes.

Creating a Launchpad for Youth in the Emirates

The whole event would not have been possible without the energy of its two female founders, Emirati Sara Falaknaz, and Saudi entrepreneur Deem Albassam. After attending a talk at Harvard on Startup Weekend by Carl J. Schramm, President and CEO of the Kauffman Foundation, AlBassam decided to attend Startup Weekend New York and consulted with Schramm about bringing the series to Riyadh and Dubai.

“We wanted to create a start-up movement in the Arab World. It is very rare for people here to find their starting line,” said AlBassam. “We wanted to give them that starting line.” Interestingly at SW Dubai, it seemed that most of those interested in finding that launchpad were women. “Emirati women proved to everyone today that even in a conservative culture like that of the UAE, they are capable of innovating, working in teams, and simply being entrepreneurs,” said Falakhaz.

In general, the UAE needs more such events that can push entrepreneurship in the three critical dimensions that Startup Weekend Dubai did.

First, it forced UAE youth to practice the 21st century tech and communication skills that our current education system doesn’t emphasize enough. For many, SW Dubai was the first time they worked together in a team towards a specific goal, or spoke on stage about their ideas.

Second, in a city that is often marked by stark economic, social, and ethnic divisions, the event brought people from all walks of life together in one room. Judge Prashant K. Gulati of Optimistix Ventures highlighted that it was a great exercise in community building and development, while Dan Stuart attested, "this was the best cross-section of UAE society that you could’ve hoped for."

Finally, as CareZone founder Ritesh Tilani put it, “the keyword here is exposure. Events like Startup Weekend expose the youth of the UAE to entrepreneurship and that alone creates opportunity for personal and business growth.”

It is not possible to gauge exactly how many people will actually run with their ideas and try to start actual companies, but as Kamal Hassan of training and consulting institute Innovation 360 noted in his closing remarks, “the real winners of today are not those on stage, but those that take the skills they learned from the past 54 hours and apply them to their everyday life.”