Interested in starting up a new project but confused about where to get funding? In the last couple of years, we’ve seen the rise of a new type of financing that every entrepreneur should know about: crowdfunding. Crowdfunding by definition is a collective effort, in which investors and donors pool their money and other resources together, usually via the internet, to support efforts initiated by other people or organizations. Many crowdfunding sites have launched in the past few years, including the well-known U.S.-based Kickstarter, but one that entrepreneurs should keep an eye for is Sprowd, a crowdfunding vehicle that focuses on investment for startups around the globe. In this article, we will look at how these two sites operate and what they offer both to project owners and potential funders.

Both Sprowd and Kickstarter encourage people to invest in projects they believe in and are interested in, but the two sites have very different foci, as Kickstarter is focused more on creative endeavors, while Sprowd encourages business pitches and ideas, making it an excellent potential tool for entrepreneurs in this region.

Kickstarter is a self-proclaimed “new way to fund and follow creativity,” hosting projects ranging from film-making, to food to comics and so on. People must apply to Kickstarter for a project; if accepted, they will receive guidelines on how to post about it. Project owners choose a deadline and a target minimum of funds to raise. If the chosen target is not reached by the deadline, no funds are collected. Funds are collected using Amazon payments and must be deposited through a US account. Kickstarter takes 5% of the funds raised, and Amazon charges an additional 3-5%, but Kickstarter itself retains no ownership over the projects.

People who pledge money to the projects are usually rewarded with goodies depending on the amount of money pledged. 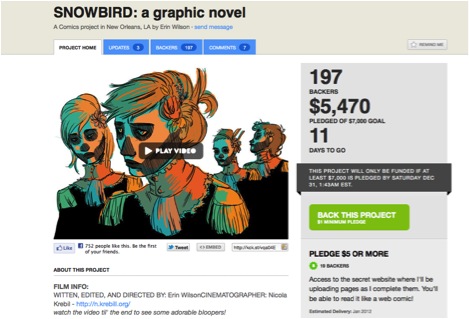 For instance, for the Snowbird graphic novel posted above, rewards range from accessing a website where the comic will be read to a combo digital and hardcopy version that contains a character designed in your image with a speaking role. The upside for the project owner is that the money comes in the form of a simple donation; it’s not required that you offer anything in return.

Sprowd, on the other hand, pitches itself as a way of aggregating small amounts of money to fund successful business ventures and allow entrepreneurs with bright ideas to realize their dreams. The project owner is dubbed the “pitcher,” while the funder is dubbed the “believer.” When a startup becomes successful, the believer will receive a return on investment in the form of cash, making Sprowd the first online facilitator where people can invest easily in businesses in small amounts and be rewarded for their beliefs and investments. Sprowd even helps sort out the legal aspects of the business and keep investors aware of them to ensure a smooth process. The site also allows the investors to take on a bigger role than the donors on Kickstarter, by allowing the investors and the entrepreneur to form a closed channel communication to discuss improving the business pitch or concept. 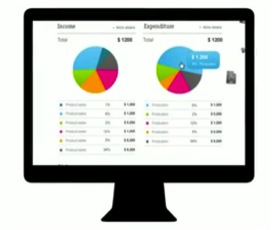 The critical advantage on Sprowd is that while Kickstarter demands that you have access to a U.S. bank account, Sprowd insists that you can get a startups funded anywhere in the world. While it’s still a relatively new venture, and we do not have all details concerning its revenue model, it’s safe to assume that it will follow a similar model to Kickstarter and take a percentage from the crowdsourcing revenues.

While opening a new business or beginning a creative project is becoming more difficult these days with the global financial downturn, both Kickstarter and Sprowd are opening up new possibilities for small-scale funding to become a powerful source of financing in the aggregate. Sprowd especially may change the funding landscape globally, for those startups that fall below the range of typical seed-stage funding vehicles, or who can’t find angel or venture capital funding in their immediate community. Keep an eye out, as it will likely launch soon.