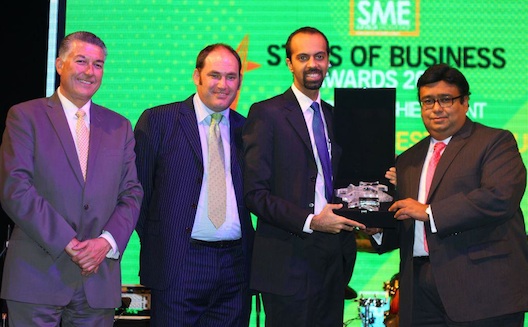 In a domain where more established players typically take home the awards, two young socially-oriented startups received a boost at the SME Advisors Awards & Summit 2011 in Dubai last week, demonstrating a shift in the status quo.

At the November 28th event, which is an offshoot of Gulf-focused magazine SME Advisor Middle East, received 3,800 nominations for 26 categories.

Some winners were perhaps not a surprise. Job search juggernaut Bayt.com took home two awards, Business Star of the Year, and in the Best in Technology and Online category. Given its product launches this year, and founder Rabea Ataya’s savvy planning, it makes sense that Bayt would be given its dues.

Wild Guanabana, which has been creating ethical, sustainable adventures around the globe since its launch in 2009, took home the award for Stars of Business Award 2011 for Tourism & Hospitality.

It came as a nice surprise, says founder Omar Samra.“Typically, the travel sector is wholly dominated by companies that are very well established; usually it’s not won by young or small companies. But the word on the street was that we are disrupting the sector a bit because we focus on sustainability, and creating positive experiences for locals in the communities we travel to.”

Another factor influencing judges may have been the startup’s CSR program, which has raised about a quarter of a million dollars for mental disability in Egypt. And the company is on a roll- earlier this month they also won the Global Tourism Award 2011 at the London Travel Market in London.

Carezone (pictured above), which launched its iPhone app only this September in Dubai, took home the “One to Watch (best new business)” award, which GoNabit won last year. Founder Ritesh Tilani said he didn’t expect to win for his iPhone app, which allows customers to donate to charities of their choice with points gained while shopping.

“The fact that they would give the award to a mobile company is huge; it’s a complete mindshift. It’s a huge honor for us of course, but it’s also great a great message to people looking to build a mobile platform that this is the future.”

It also critically supports social entrepreneurship, he says. “For us to have won tells us that the veterans in business believe that it’s not just important to make money, but it’s important to make a difference.”

He joked that the fact that success story GoNabit won the award puts the pressure on, but Carezone is wasting no time rolling out new features. “In the next week, we’re looking to add social mentions, so that whenever you give to the charity of your choice, you can share it with your friends and family,” says Tilani.

Samra, for one, is completely supportive of Carezone beating out Wild Guanabana for the “One to Watch” prize. “I think they disrupted the geotagging sector by taking a charity-focused approach,” he explains. “If we didn’t win it, these were the guys that we were rooting for. It’s great to see startups that have a social angle but also make business sense. What they’ve done so far in a short period of time is great.”

Perhaps these awards are simply an acknowledgement that sometimes underdogs are the best innovators. Some startups in the region start with a lot of resources behind them, Samra elaborates. But it’s the others, that bootstrap everything, as he and Tilani have done, rely on social media, and fight uphill battles to educate their markets, that speak to his heart. “It’s these stories that I root for the most, and that I’d love to see more of.”