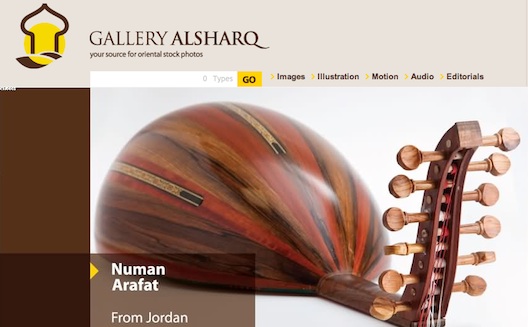 Like many entrepreneurs, Riham Mahafzah first dreamed up an idea for a specialized online image gallery three to four years ago." But it wasn't until this fall, when a Turkish TV station offered her a new job, that she was forced to decide whether to start it. Around the same time, she also discovered that she was accepted into the next cycle at Jordanian accelerator Oasis500.

Why chose entrepreneurship over a steady job in a growing market? "I wanted to create my own company," says Mahafzah. "I decided that this would be something new, so I decided to go for it."

The Amman-based gallery site is designed to offer images that reflect Middle East and Arab culture in a contemporary setting, a niche market that Mahafzah says has a big gap. "When it comes to a task to do with oriental identity, ad people go through a lot of difficulty to find the right oriental images to get the job done."

Mahafzah understands the demand firsthand from her experience working for 13 years as a creative director, at Afkar Promo 7 and then AdPro Communications in Jordan. There are more than 1000 design agencies in the region, she says, and Gallery Al Sharq hopes to capture a 10-15% market share.

The global stock photography market generates about $1.8 billion dollars annually from licensing fees, says Mahafzah. Spend in the Middle East likely accounts for less then 10% of that market, as the online advertising market in the Middle East was worth about $150 million in 2011.

Online advertising (which totalled $14.3 billion in 2011, as estimated by the Pan Arab Research Center) continues to be dwarfed by TV, newspaper, and magazine ad spend, yet online ad spend is expected to grow to $266 million by 2013.

To capture its segment of the booming market, Gallery AlSharq will eventually focus on sound effect, audio clips, and videos as well, but in its early stages has  begun with images, generating over 1000 original images along with 2000 that were submitted by stock photographers after they saw Gallery AlSharq's ads posted all over Amman.

Mahafzah shot the first 1000 photos herself over the past few months, using freelance photographers who agreed to be paid by revenue share, getting antique stores to agree to let her shoot their wares in exchange for photos, and by outsourcing her photoshoot sessions, models, and development work. Doing all of this while minimizing her cost has been her biggest challenge to date, she confesses.

She'll aim to turn a profit by introducing two standard revenue streams: charging per photo, and offering a subscription model. Photographers will take around a 30% share of images. To compete effectively with larger galleries online, like Corbis representative arabianEye, Gallery AlSharq is sticking to its niche and plowing forward full steam, aiming for 5000 photos by the end of February, and 200,000 by the end of 2012.

While Mahafzah comes across as somewhat of a one-woman show, she's been helped tremendously by Oasis500 incubation, as well as supportive mentors at her previous employer, she says. As an e-commerce site, she's still testing out the right payment gateway, considering offers from two candidates.

For her, this creative development process is far more exciting than returning to working in advertising alone. "Once you've felt like you're creating something new and different, you want to create new things all the time."