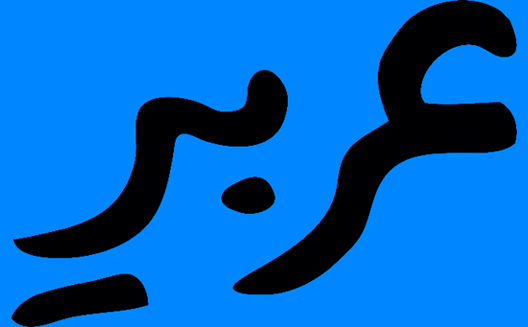 Last time we spoke about the clichés being made in developing Modern ‘Arab’ Identities, but never identified what makes one successful. While the task is tricky, and the rules are still being defined, there are a few simple guidelines that can help achieve this:

We’ve already identified the clichés around Arab identities, but we are still left with the indeterminable question: What is Arab? Arab culture has a long history with a vast geography, including many different identities. Perhaps that is why we tend to lean back on the cliché characteristics of surface Islamic culture at its beginnings. However, Arab is not purely Islamic, nor is it purely of that time, especially if we are talking about contemporary Arab identity.

It might seem like this leaves us with little (or rather, too much) choice. However, we tend to forget the most obvious functional characterization of making an Arabic identity; let it lead in Arabic. After all, what defines an Arab Identity better than the language that defines it? An “Arab” identity is an identity in Arabic.

The Arabic language has always had a rich historical rhetoric. Few people today communicate in what is known as “classical” Arabic. However the professional and business industries still do. This creates an issue when trying to develop a contemporary identity. The trick is to find a modern way to communicate your intentions without adapting to colloquial dialogue (as it can be misinterpreted as “slang”).

Furthermore, the inherent nature of Arab typography has been struggling to adapt to the modern innovations of typography and their ability to convey an identity and its needs today. Traditionally, Arabic typography was solely calligraphic, and used to write Quranic verses. Its artistic and versatile nature makes it more difficult than other languages (with the exception of Chinese, perhaps) to develop unique and modern characters for modern identities. However, if you truly want your Modern Arab Identity to be unique, it is crucial that you develop a distinctive and functional font for it.

In the struggle and immediacy of emerging Arabic identities, there have been no rules about the role that language has in identity implementation. This is also perhaps because of the gap of natural development in the industry historically. Wars and colonization and more wars have left the region underdeveloped and stagnant for hundred of years. With this said, we’ve seen horrendous appropriations of Western marks into Arabic because there are laws that all brands must be equally displayed in Arabic. We’ve seen Arabic names that exist primarily in phonetically translated English. We’ve seen bilingual mashups of too many words, resembling a poster collage more than an identity.

Instead of trying to force too much information, it is important to define a hierarchy. Determine what is most important to communicate and do it simply. If there’s a need for global recognition, use Latin as a secondary signature, rather than flip your brand into English. In the same manner that flipping a Latin design into Arabic is controversial, so is the opposite. Remember not everything has to be 50-50. In fact, unless Arabic and Latin will exist separately in every application (where you have a separate version of each), together they compete and cancel each other out. There should be a purpose for every decision you make.

Lastly and most importantly, and this applies to any form of identity creation, form must always follow function. We already used this rule to determine whether your identity should be ‘Arab’ or not.

Does it work for what you are trying to communicate? Use a color because it evokes meaning, not because you like purple. The font isn’t a personal choice; it’s a professional one. If you need to convey fun, the font should be playful; if you need to be serious, it should be more conservative and strict; so on and so forth.

Of course designing a brand identity involves many more steps and can be a lot more complicated. That’s why we hire experts. But if you let your process be guided by these five guidelines, at least you understand what it is you want to achieve in developing your identity. Most of the time, it seems difficult to assess whether one design is better than the other because you are not really sure what you are looking for. You want it to look more ‘Arab’ but don’t know why or how. Committing to anything seems like a struggle because you do not feel confident that your decision is the right one.