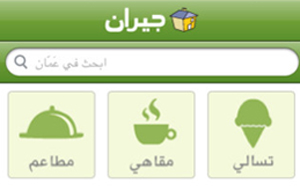 Online local review site Jeeran is now solving one of the biggest issues facing consumers in many Arab cities: easily contacting local services on the go. Today, the site has announced the launch of a new iPhone app, which will list the location, number, and reviews for local places of interest ranging from hotels and hospitals to restaurants and spas.

The transition to mobile marks the latest iteration for the site, named for the Arabic word for "neighbors," which last year pivoted from being an Arabic language online community to being a bilingual site for reviews of local businesses and services.

The app, which boasts a very simple and intuitive interface, is a natural next step, as Jeeran's information is often most valuable in transit. The possibility of searching for places by "Closest," "Best," and "Newest," as well as viewing places on a map, provides an incredibly valuable service in a region where Google Maps can be very hit or miss.

While it is not available in Beirut, a quick test of the app revealed that its search engine listed several easy-to-browse, geolocated options in Amman, although a search for "coffee" left two of my favorites, Cups & Kilos and Turtle Green, out of the list. Another drawback is that the app is only available in Arabic, limiting its use for non-Arabic-speaking expatriates and travelers.

The app's launch speaks to Jeeran's commitment to evolving its brand since its launch in 2000. After switching from hosting broad video and blogging content to filling a specific niche after receiving a third round of investment from from IV Holdings and Intel Capital, the site has become a go-to source of local information in cities like Amman.

The cost of that pivot may be a dip in traffic; since we wrote about Jeeran's shift almost a year ago, its ranking on Alexa has fallen from 2,000 to 4,731 globally, from 48 to 54 in Jordan, and from 158 to 269 in Saudi Arabia. Yet paradoxically the site may be generating more ad revenue with its focused approach. A move towards building smartphone apps may only increase the platform's agility and profitability.

As competitors like restaurant-only review site Mealadvisors carve out niches of the reviewer market, Jeeran will have to continue iterating to stay ahead of the pack and keep its community loyal. Yet it still boasts the only comprehensive review platform in Jordan, and its iPhone app will set the bar even higher.

Check out the free Jeeran app on the Apple App Store; screenshots below. 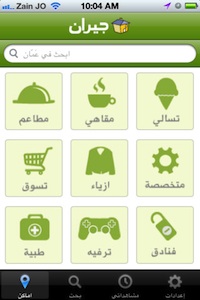 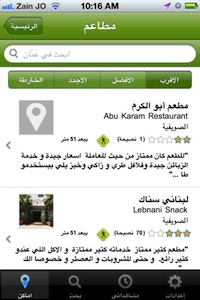