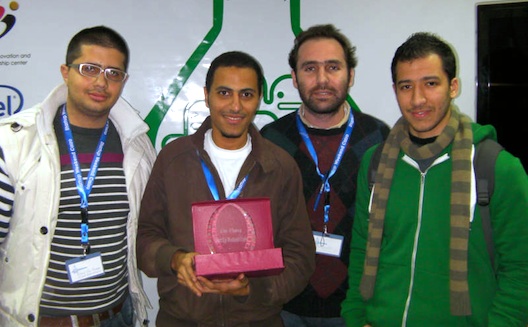 “Is it better than the original?”  That’s the first question we normally ask about the sequel. Startup Weekend Cairo, held from the 19th to 21st January, 2012, at the Technology Innovation and Entrepreneurship Center (TIEC), was no exception.

The event, designed to make aspiring entrepreneurs pitch ideas, vote, form teams, develop a prototype, and pitch to judges all within 54 hours, in the standard Startup Weekend format, was run by a similar team this year, during the anniversary of last year’s formative protests in Tahrir Square. Compared to last year’s event, which was held in May, first impressions were mixed.

Numbers were down; there were about a third less participants, and half as many teams and eventual prize winners. The food was also worse: there were two cold snacks and one cold main meal, instead of one cold snack and two hot meals.

However, critically, the event was better structured. There were buses to three areas of Cairo instead of one. Nearly all of the speeches were delivered at the beginning of the event, the teams had to book time with mentors in advance. Even the StartUp Weekend template slides were updated to show Thursday as the start day instead of the default Friday.

The venue was also more intimate; only three rooms at the Technology Innovation and Entrepreneurship Center were used.

It was no surprise that the energy levels were subdued; a cold snap is Egypt also played its part.  But reduced buzz was actually exactly what the organizers had planned.

“The first event was the launch and had to be big and bold.  From this event on, we wanted everything to be smaller and more manageable, and more in line with the events abroad, many of which take place in only one room,” explained lead organizer Ahmed Faidy. “We also decided it was time to expand the community, so we made sure most of the participants were new faces, and we chose a lower percentage of students, so they could learn from working with professionals, and create more working applications in the end.”

The decision to bring in new faces fit perfectly with the speech made by speaker Dr. Khalid Ismail, MD of Intel Mobile Communications and a favorite amongst Egypt’s entrepreneurial community.  After giving his trademark light-hearted advice, such as, “Focus on being good before being great,” he added, “these types of events are great learning experiences, but don’t become addicted, come to one, then go off and start a business and continue your learning in the real world.”

Speaking to us on Saturday he said, “We’re not happy we weren’t allowed to stay at night; we lost valuable time travelling back and forth. Yet we did stay up late talking on the phone to develop the app, as the whole team is here to win.  Yesterday I think I spoke to every mentor, and even though that took hours away from the time I had to develop the app, I saw it as time well invested.  Every single mentor opened my eyes to things I hadn’t thought of, and now we’re well on track to present a fully functioning product.”

Indeed, just as the organizers had planned, at the end of the event over half the teams had a fully working site and/or app to present.  But this fact wasn’t enough to impress some people.  “I know the percentage of working products is (much) higher than the first Cairo event and the event in Alexandria, but I’m not impressed with the quality of the ideas.  Alexandria was easily the best event,” exclaimed Baher AlHakim, founder of CloudAppers.com. The only mentor present at all three Egyptian StartUp Weekends so far, he’s also notoriously hard to please.

The three winning teams, Shoghlanah, Grabits, and Far7a.com, all built and expanded on existing ideas. Far7a (meaning “joy” in Arabic) was the overall winner.  Their team took the idea of creating comedic content for web and mobile, gave it an Egyptian twist and a couple of new features, like scheduled SMS delivery, and filled a niche in the Egyptian market.  With the first anniversary of the Egyptian revolution imminent, the Egyptian people dominated the thought process of Far7a’s originator, Bahaa Ali. “There’s a lot of despair and negativity around, so I wanted to create something to lighten our mood,” he explained. “I’m very happy we won but I still can’t believe it!”

The other two winners also focused on ideas that would serve a people looking to rebuild a society in the wake of political turmoil: Grabits was a customer survey collection management site and app, while the Shoghlanah team designed a domestic odd-job marketplace for web and mobile.

Perhaps it’s unfair to expect the “next big thing” at a Startup Weekend, but it makes sense that most start-ups at Startup Weekend Cairo would deliver localized or enhanced versions of existing ideas, as the Egyptian entrepreneurial ecosystem is still nascent.

So ultimately the question shouldn’t be whether this event was better than the first, but whether it fulfilled its goal.  The goal of all StartUp Weekends is to “learn by doing,” and for this event specifically, the goal was to “expand the community.” On both of those fronts, the event delivered.