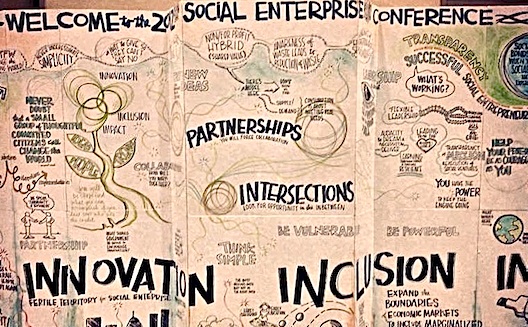 The crowd of 1,500 young, passionate (and caffeinated) attendees bounced around the hallways between panel discussions, hands-on workshops, and the much-anticipated Pitch for Change Competition. The excitement and entrepreneurial spirit were palpable. When meeting someone, the question was not the usual “What do you do?” with which east-coasters usually strike up conversations, but rather, “What’s your idea?

Daniel Epstein of Unreasonable Institute set the tone of the conference by opening the keynote address with a reminder of what unites all attendees: a deep desire to Change the World. He was joined on stage by Kavita Shukla of Fenugreen, Lauren Bush Lauren of FEED, and Taylor Conroy of Destroy Normal - three young social entrepreneurs who have made a big impact.

One of the topics discussed was fundraising. Taylor’s advice: the most effective way to raise funds for your project is to reach out to people you personally know, ask for little (microgiving), show them the tangible impact of their gift, and finally, acknowledge them (a little recognition never hurts). Lauren Bush’s FEED Project which has sold over half a million bags, providing 60 million meals in the process, perfectly illustrates the last two points: every FEEDbag features a printed number on it that indicates how many children are being fed by your purchase.

The conference did not fall short of inspirational talk by charismatic personalities. Judge for yourself with these selected quotes:

“Social entrepreneurs are self authorizers, giving themselves permission to do what needs to be done to change the status quo.” (Daniel Epstein)

“Innovative leaders have the audacity to dream, and the tenacity to deliver" (Judith Rodin, Rockefeller Foundation). 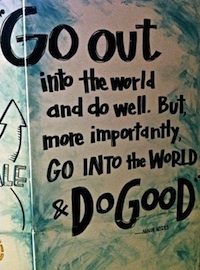 Margaret McKenna, who manages a US$ 100 million philanthropic fund as the president of the Wal-Mart Foundation, tempered the excitement. “Social entrepreneurship often translates to 'I'm going to start my own thing so I can be the president of DoingSomethingGood,'" she pointed out. But she reminded the audience that doing good while doing business is not an easy task. The structural and managerial challenges facing social entrepreneurs are real.

Indeed, another recurrent theme at the conference was the idea of getting comfortable with risk, practicing making mistakes until you get it right, and accepting failure as an intrinsic part of the game. Timothy Prestero, CEO of Design that Matters spoke of the importance of prototyping when innovating for the bottom of the pyramid.  "Somebody in the world knows that your idea sucks, and the sooner you find them, the better," he said. Jo-Ann Tan of Acumen Fund echoed that sentiment: “small incremental insights are more likely to lead to success than one big ‘aha’ moment.”

As I wandered from panel to panel, one dichotomy particularly struck me. On one hand, social entrepreneurs and practitioners were stressed the importance of adapting goods and services to the specific needs of the communities they serve. On the other hand, the same investors that these entrepreneurs hope to attract typically stressed a different dimension: scalability and replicability.

While it is true that measuring impact is crucial, using the wrong metric distorts incentives. I would argue that replicability is not always the right test for worthiness of receiving capital – after all, what matters isn’t the number of people touched, but rather the number of people served. So social entrepreneurs need to keep in mind that in absence of good measures of success, their reputation, their skill at leveraging their network, and their interpersonal relations matter all the more.

Change doesn’t happen overnight, and only 9 percent of all startups survive their first year of existence. But events like the Social Enterprise Conference are a good reminder of why each year, a larger number of people take the risk of becoming social entrepreneurs, hoping to CTW.

Follow #socent and #impinv on twitter to get plugged on the news from the social enterprise and impact investing spaces.

* Named by Forbes.com as one of the “Top 12 most influential and exclusive executive gatherings” in 2009 (along with the World Economic Forum at Davos, and TED), the student-run conference is jointly produced by Harvard Business School and Harvard Kennedy School of Government and was attended by 1,500 participants and 75 speakers.