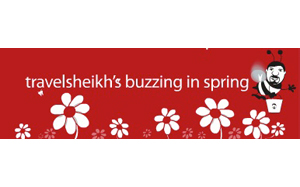 The newest flight and hotel booking on the block, Travel Sheikh, is set to lead the travel e-commerce space. Not just because it's the first Expedia-style portal of its kind to offer a fully Arabic interface, but also because its e-commerce site is a savvy, well-thought out expansion from its already established offline business.

Offering flight, hotel, and rental car bookings, as well as vacation packages, Travel Sheikh, which launched in July 2011, has grown quickly, now beating out its primary competitor in the region, Joob, which is now down for undisclosed reasons. The site now has around 4,000 registered users and around 700 unique visitors a day, a jump from the 2,000 registered users it had only a month ago.

Yet Travel Sheikh is far from just another buzzy e-commerce site; rather, it's the carefully-constructed arm of a 16-year-old Amman-based travel agency, Dahlan Travel. Founder Hani Dahlan's vision for an e-commerce portal began 4 years ago, when he realized web-based sales were the future.

At the time, he bought a ready-made customized platform from UK developers. But in e-commerce, the devil is in the details; localizing the site became an arduous process as Dahlan searched for the right payment gateway.

His persistence paid off; as competition heats up over the next year, a few qualities will keep Travel Sheikh a step ahead of the pack.

1) It's secure, thanks to a good payment gateway

At first, Dahlan tried to use a local payment gateway. Yet, after trying a few of the available options in the Middle East region, he settled on using UK company RealEx, using a local UK partner to facilitate the financial flow back into Travel Sheikh, which is registered as part of Dahlan Travel in Jordan.

"We went from supplier to supplier in the Middle East and couldn't find a good solution that was compatible with our backend system and secure. It took us six months to finalize the payment gateway," says Dahlan.

This is perhaps the most critical decision he made, he says, because using the right gateway is key for gaining trust. Other challenges pale in comparison thanks to existing experience at Dahlan Travel.

Finding the right payment gateway also allowed Travel Sheikh to offer a level of flexibility that others in the region might not have.

"A typical gateway here will restrict you to only buying tickets for yourself if you are using your credit card," says Dahlan. "With Travel Sheikh, you could pay for a ticket for a friend of yours. We can offer that because our payment gateway does not have those restrictions."

2) It's unique, thanks to steady offline business

The fact that Dahlan Travel does not source travel deals solely through third party agencies, but in fact is an independent travel agency, will also likely allow it to court customers with unique offerings that set it apart from, well, say, Expedia.

"Taking the company online was an eventual step that we had to take, but it's nothing different than what we do in our day-to-day business," says Dahlan.

"Eventually, we hope to save on overhead and staffing," he says. But for now, the business is run directly in tandem with the offline business; no offline elements have been cut, and the team of 23 has expanded slightly.

Dahlan Travel's secondary function as a supplier to other travel agencies also boosts its ability to navigate the e-commerce space. "Because of our B2B service, we acquired the full experience of how to handle online booking," says Dahlan.

That B2B business is only growing, as Dahlan Travel expands into markets like remote areas of Iraq, where traditional travel agencies don't exist, he says. As the company continues to expand into smaller cities and remote areas in Libya, Algeria, Sudan, and Iran, Travel Sheikh will likely also benefit from offering unique routes.

Even the most trustworthy payment gateway and unique set of flights won't lure customers in droves. To build a loyal customer base, Travel Sheikh launched vacation package competitions. Offers of trips to London, the Imperial Suite in Cairo, and Venice in September, October, and November were not just auctions, but competitions in which customers had to post pictures of themselves and receive votes in order to win, or guess the answer to a trivia question.

To win a trip to Rio de Janeiro, Brazil for Carnival, fans had to submit photos of  their best Carnival costume. The man with the best photo not only won, but posted more photos from the event on Travel Sheikh's Facebook page.

This month, after offering a trip to Amsterdam in February, the company is running a "Why Do You Love Lebanon" campaign, awarding the couple with the best answer a trip to Beirut and a stay at The Riviera.

With this personal approach, Travel Sheikh is establishing itself as more than just a generic international travel portal.

Any entrepreneur looking to launch an e-commerce site would be wise to cultivate these three qualities.

Yet, Dahlan emphasizes, they shouldn't reinvent the wheel. "There are several solutions out there for several elements of the pipeline," he says. "They're ready and they're cheap, so I advise startups to check with an existing solution."

Then, he says, connecting with the best payment gateway available really is the most critical step. "This will make or break your e-commerce business. Don't be afraid, just do it. Customers will come."