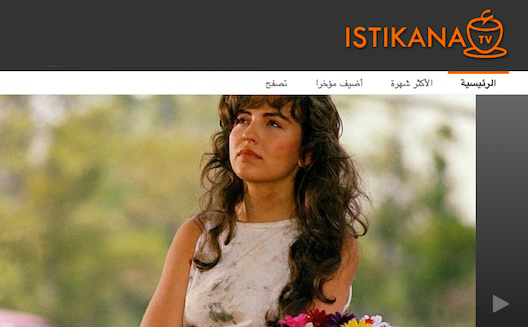 It’s been a good year for Istikana. One year ago at digital media conference Arabnet in Beirut, the Arabic online video company launched a Hulu-like portal with a classic content twist. One year later, they’re announcing a game-changing content partnership with Arab Radio & Television (ART), one of the region’s biggest owners of film content.

As I chat with founder Samer Abdin at Arabnet's Developer Days, he speaks with the quiet confidence that only comes after a year of breaking ground and learning lessons along with co-founder Tareq Abu Lughod. “You know," he says, "I think we're on to something.” It's an understatement, but Istikana doesn't need flashiness to garner attention today.

The ART deal, which will complement the site’s TV content with a trove of popular and classic films, happened over a quick two months, and was a "no-brainer," says Abdin. "This is the start of a long-term relationship for us. We're excited about starting this, and we'll be releasing our first film this coming Thursday and every Thursday from now on for the foreseeable future."

The move is a coup of sorts, giving Amman-based Istikana a significant leg up in a very nascent market. In the Arab world, the Over The Top (OTT) video-on-demand market (as opposed to IP TV video-on-demand, which is available via cable) is where the U.S. was in 2008, Abdin points out, when Hulu had only been online for a year. While it remains to be seen whether OTT becomes a media mainstay in the Middle East, Istikana’s growth over the past year has exceeded its founders expectations.

As competitors like Seeqnce-incubated Cinemoz and MBC's Shahid compete for online eyeballs, Istikana has worked to differentiate itself by focusing on two things: its extensive, unique library, and its multiplatform capability. While Cinemoz has recently offered documentaries and short films, and Shahid continues to publish content that currently exists on its television channels, Istikana does neither, insisting on offering classic and mainstream library content that has either never been on television or isn't available on DVD or other VOD services.

While building its library, the startup focuses on collecting and analyzing user feedback over social media. "We ask people questions about their preferences on a weekly basis, or show a cartoon that was popular during a certain era, and gauge reactions,” explains Mohamad Shawash, who works on Istikana's social media strategy. Most of the site's traffic comes from Saudi Arabia and the Gulf, where users aren't necessarily partial to Khaleeji content but enjoy cartoons, old shows, and Egyptian shows as well, he says.

Istikana also works to make sure that viewers have an easy time viewing content on the iPhone, iPad, and Android, and even Google TV. After working hard this year to be whitelisted on Facebook, the platform is now integrated with Facebook’s Open Graph, so viewers can watch videos directly within their Facebook news feed rather than navigating to Istikana. The fact that the platform is built on Ruby on Rails has garnered interest from the tech community as well.

While the site was mobile-ready from the start, mobile has proven to be more popular than the founders originally suspected. "This confirms our initial strategy," says Abdin. "We'll continue to focus on evolving on the platform."

Yet building Istikana to be viewable on multiple devices isn't really about pointing to the technology, says Abdin; it’s simply to make watching movies more convenient. Continuing beyond the ART deal, the goal, says Abdin, "is to carry on listening to our viewers and trying to give them what they want."