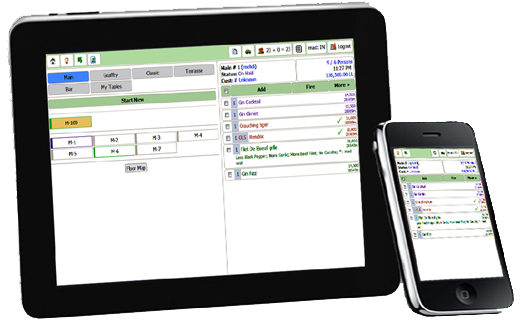 Ordering food in a restaurant can be a tricky endeavor, with orders frequently getting lost in the chaos. The elimination of paper orders using mechanical systems has been a leap forward. Working from a self-developed platform, I-DAW is a new company hoping to beat out the competition on a global scale.

PINE (Productivity Is Now Easy) is a system developed by Imad Daou, a software engineer, to run on a self-developed platform. The I-DAW (Intelligent Development of Applications on Web) platform which took him three years to develop, provides custom solutions, mostly for retail, stock and accounting clients. Its main application, PINE, is a POS (Point of Sale) system which is finding favour with restaurants and businesses around Lebanon.  “We grew 200% over the last 6 months, expanding from 9 to 27 customers,” says Jeffrey Khater, I-DAW’s Business Development Executive.

After developing PINE into a fledgling business, Daou met Khater, a tech-savvy student with the gift of the gab. Khater joined to help market PINE, and the team recently added Stephanie Barakat to the team as an account manager to prepare for the next phase of expansion.

The team speaks with reverence of Samer Karam (of the Sequence incubator), who gave them the golden tip to stick to a wireless system. PINE runs from one server and can be operated on any PDA with a WiFi connection, such as an iPod. Competitors often provide clients with hardware as well as software, which can expose a system to increased possibility of crashes, says Khater. By running the ordering system from a browser, PINE crashes are less likely and have less impact; they only affect the last order, rather than the entire system.

“The only problem with wireless systems is politicians’ cars; the radars to disrupt bomb systems affect the signal, but that is a Lebanese problem,” says Elie Salloum, a waiter at Secteur 75, a Beirut restaurant which uses the system. He and his colleagues are all enthusiastic about PINE. Although they are used to competitors like Square and Omega, they all agree that PINE is very simple to use. It’s good for fussy eaters too, as it allows you to input much more specific orders. Salloum demonstrates; when he clicks ‘steak’ he can choose whether to add more, less or no vegetables, potatoes and so on, a feature that other systems don’t have.

With 17 restaurants and 10 businesses using their PINE system in Lebanon, the team are eager to emphasize that they have surpassed the startup phase. They are looking to expand into the MENA region; the UAE is their next market, with Jordan, Saudi Arabia and Egypt following. In order to do this, they are looking for strategic and technical partners.

“We are using a business model similar to Microsoft's,” explains Khater, referring to the system of through-partner marketing, in which resellers and distributors take part of the cut.

In addition to this, I-DAW is trying to raise awareness of their product. One way is the MIT Enterprise Forum Arab Business Plan Competition; the team reached the semi-finals and presented their ideas in Abu Dhabi last week at the MITEF workshop. “It was such a great experience to meet with the 50 other teams, who are some of the brightest and most motivated people in the Middle East,” says Khater.

The team is undaunted by their competition, feeling their wireless system and user-friendly interface will beat systems like Omega and Squirrel, their biggest local competitors. “We plan to claw their market share,” says Khater. “In 10 years, we’ll be global for sure.”