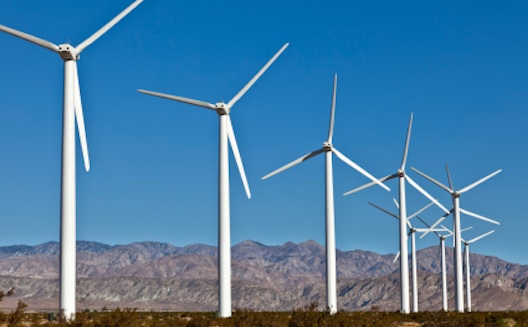 The world today needs a clean and affordable energy solution to address both growing electricity challenges and the effects of global warming. Experts expect demand for electricity to boom by about 50% by 2030, driven by increasing urbanization in China and India.  At the same time, it will cost more than $45 trillion to halve carbon emissions by 2050 in order to fight global warming, according to the International Energy agency (IEA). Yet failure to take action will be even more expensive.

Is wind energy a competitive solution?

Wind power is one of the technologies the world is counting on to provide a source of sustainable, non-polluting energy. Wind is abundant, totally clean, renewable and, unlike fossil reserves, it is widely distributed across the five continents.

Yet a few critical drawbacks have prohibited wind from becoming a highly scalable solution. The laws of physics limit the usable electricity from turbines to 30-40% of original wind power, intermittence effects increase volatility on the grid (given limited power storage options), turbulent wind (mostly over land as opposed to sea) increases energy loss, and other side-effects like noise pollution, vibration, impact on wildlife, interference with airwaves and radar disturbance are triggering public controversies.

As a consequence to these serious drawbacks, current wind technology is not economically viable without substantial public subsidies. Rather than ask wind power to defy the laws of economic gravity, we need to invent a new cost-effective technology that addresses most of the above drawbacks. That’s where innovation comes in.

Why has innovation in wind technology been rare?

Despite tens of billions of dollars pledged for Research & Development (R&D) over the last decades, wind technology has not significantly evolved and is still inspired by the centuries-old windmill system. While experts praise improvements in Kw/h over the last decade, this is mainly due to scaling up turbine size rather than a real technological leap.

The world is still waiting for real major breakthroughs in wind technology, something comparable to the IT revolution of the 90s’, when the world was blessed by several disruptive innovations. In the meantime, we are running out of time. There are at least three main reasons that could explain why innovation is wind technology has been disappointing:

1. An absence of lateral thinking.

Since the early 80’s, most of the major players in wind have explicitly concluded that the three blade wind turbine design is the best to be adopted for mass production. Yet as long as we use a turbine that converts the kinetic energy by blades-rotating mechanism, we won’t be able to exceed a theoretical efficiency level of 59% (Betz limit). Despite the serious drawbacks of the three blade technology (as highlighted above), major wind players are either unwilling or simply unable to consider other directions to overcome such limitations. This unwillingness speaks to the power of “incumbency capitalism,” which protects the interests of incumbents (the same big players) to the detriment of the innovators.

The wind turbine market is an oligopolistic one; the top 10 wind turbine manufacturers, all of which are well-established multinationals, are capturing more than 80% of the market. This is where the problem lies, according to analsysts like Clayton Christtenson, who explains, in his paper “Innovation Killers: How Financial Tools Destroy Your Capacity to Do New Things,” why big companies innovate so little. He points out that the misuse of a number of financial valuation tools (e.g. DCF/NPV/EPS) tend to discourage real innovation by underestimating the real return of innovation and focusing on near-term earnings growth at the cost of long-term development of the company. It’s not just thanks to a bureaucratic structure; by focusing on sustaining existing technologies that offer decent margins at lower risk, they kill innovation.

3. R&D in mechanics has been neglected.

Many engineers acknowledge that innovations in mechanical engineering (such as wind turbines) have occurred at a much slower rate compared to other disciplines. The top 30 innovations of the last 30 years do not include breakthroughs in the mechanical field; most of the focus has been on Information and Communication Technology (ICT), where the development cycle is quicker, the infrastructure is simpler, and investment in prototyping and testing is not substantially high. In other words, ICT’s rapid development has indirectly hampered innovation in mechanics and has somehow monopolized the spotlight. We are far beyond the glorious era (between World War I and II) when huge public budgets were pledged to support R&D in military programs, resulting in major innovations in the mechanical field.

Today, the world needs a breakthrough wind technology that generates clean, cheap and storable energy. The company or country that comes up with such technology will simply trigger a major revolution that will reinvent the foundations of global economy. This sounds too good to be possible, but the history of human evolution has taught us that nothing is out of reach. We just need to challenge the conventional wisdom, develop a more attractive innovation ecosystem and increase our focus on this promising technology. As statistics show us that the overwhelming majority of innovations come from places that are least expected, the dream to see something spectacular coming from a developing country is still permitted. Will the seeds of the next green revolution sprout in Tunisia - the nation that instigated the jasmine-blended wave of freedom across the MENA region? We shall get the answer very soon.