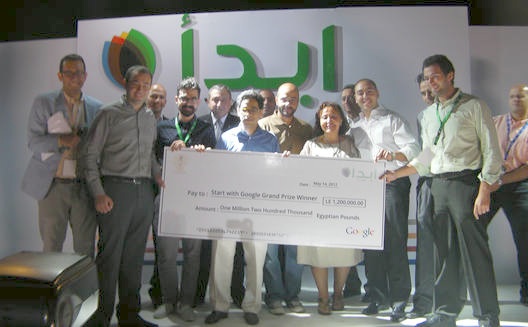 “The baby has a face only their mother could love,” some say. After waiting expectantly for about 9 months, witnessing the labor pains, looking forward with hope and sharing in the excitement of the birth, we’re primed to celebrate the promised beautiful new baby.  Except the baby isn’t beautiful, and we can’t help but feel let down.  That was the feeling of the vast majority of the audience when the winner of the Google Ebda2 (Start With Google) competition was announced and handed a cheque for EGP 1.2 million (~ US$ 200,000) this past Saturday, roughly 9 months after the competition started.

Before jumping to conclusions, let me make these points clear: The organization of the whole competition was top-notch.  The message of entrepreneurship was taken to most corners of Egypt.  All of the competition finalists were good prospects, and many were very innovative. The 10 minute final presentations the teams made to the judges were mostly polished affairs, vastly superior to the presentations we’ve seen at similar smaller competitions.

The final ceremony itself was a beautifully lavish affair in Fairmont Nile City hotel, atop the roof garden, great food and super company overlooking the beautiful Cairo skyline.  Those attending mingled freely in the relaxing atmosphere, and laughter was heard frequently.  Even the expectant finalists joked with each other while anxiously waiting the final decision.

There were rousing speeches by Wael Fakharany (Google's regional manager for the Middle East & North Africa, and the driving force behind the competition), Mohammed Gawdat (Wael’s boss’s boss and Google’s business manager for emerging markets), Hisham Wahby (Chief Executive Officer of Innoventures, the venture capital (VC) firm that organised the competition), and Essam Sharaf (former prime minister of Egypt and current president of Egyptian non-governmental organization Science Age Society, a key competition partner and rumored to be a big source of competition funds).  All extolled the virtues of entrepreneurship, telling the audience that it is the small & medium enterprise sector that will “fix” and “grow” Egypt, and they were at pains to enforce the idea that all of the finalists were winners.

That last statement was indeed true; all the teams received great publicity and mentorship, and grew considerably because of the process. Investors are, in fact, lined up for most of the teams.  Khalid Ismail, managing director of Intel Mobile Communications and one of the judges, revealed that he would be personally investing in 3 or 4 teams.  Sahar Al Sallab, another judge and possibly Egypt’s top female financier, announced that she was close to launching 3 VC startup funds.

It was a night packed with highs, a night that brought to light tantalizing possibilities. Furthermore, the winning idea, bey2ollak, had a solid product,  great prospects, an excellent team, and huge potential for growth.  Judges’ decisions are always subjective, so why the overwhelmingly adverse reaction to the judges’ choice?

Put simply, the competition was called Start With Google.  Bey2ollak did not “start” with Google; they started in 2010.  They were already a well functioning company, with a big user base, and Vodafone as a partner. The Twitterati were quick with the mockery and jokes, one favourite was that Omar Effendi would enter the next “start” competition. Omar Effendi is one of Egypt’s oldest department stores.

The organisers were asked repeatedly why relatively established companies were allowed in the competition at all, let alone chosen to reach the final.  The answer we got was that this was business; you had to compete with whatever competition was around, that “life was not fair!”  Would you be happy to see a boxing match between a 60kg amateur and a 80kg semi-professional because "life is not fair"?

Reading between the lines, it became clear why this winner was chosen.  They wanted a winner that would put Egypt on the entrepreneurial map, so they minimised their risk and chose the team with the most existing traction, as it was still “technically” a start-up.

So for all the revolutionary speeches, the one revolutionary idea missed was transparency.  If the competition had been called “Grow” with Google, and the judging criteria and honest goal had been stated clearly beforehand, everyone would have respected the choice of winner, even if they didn’t agree with it.