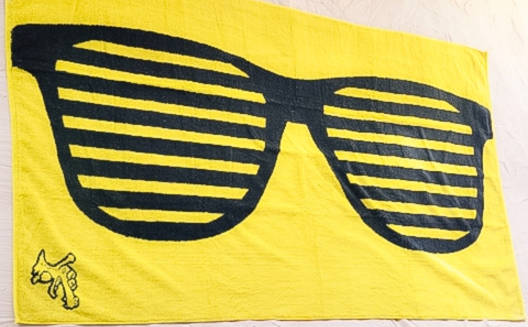 Egypt is famous for its cotton.  The best towels in the world are also manufactured here, but there isn’t a recognised Egyptian towel brand locally let alone internationally.  Foota Towels aims to correct that.

Founder Mohamed Tarek explains the genesis of the business, “All the top brands produce their towels here in Egypt, but we have no decent brands that are well marketed and delivered to the society with the best qualities. On the contrary, Egyptian cotton is rarely found in Egypt and most towel producers do not cater to the local market.  We have the potential to produce anything here and brand it but there were no risk-takers ... so we were like let’s be the risk-takers. It took about a year in planning before launching.”

That year included trips to El Mehalla textile city, the towel producing capital of Egypt.  All the factories there are geared towards the lucrative export market, and therefore have minimum order quantities in the thousands that are prohibitive to a small start-up.  As Foota’s towels are all “Jacquard” towels, which means they use dyed cotton to weave the designs into the towels, this also proved a hurdle.  Changing the weave pattern on the towel making machines takes around 6 hours; this is down-time for the manufacturer, and there’s no profit in down-time.  So Mohamed and co-founder Kareem El-Nagdy studied the production methods in detail, and came up with a production plan that allowed them to order multiple designs in smallish quantities while minimising the downtime for the factory.

I’ve sampled the towels myself, they are luxurious, and just as importantly they soak up water impressively.  They’re also beach towel size, so they’re more than a match for most water-drying needs.  The designs are modern and funky, and because they’re Jacquard towels they’re robust and long-lasting.  The packaging is also well-built and funky, but then I’m a sucker for bright colours.

Foota launched about a year ago and they hope to be profitable within the next 2 years.  Barriers to entry are big in this space, and to date they only have indirect competition from high-end towel producers that sell in Egypt through different boutique stores and local towel embroidery brands such as Tica's.

Distribution is without doubt the next hurdle they have to overcome to ensure success.  They already have a concept store in partnership with Nola Cupcakes in Diplomatic Village 3 on the North Coast, and plan more collaborations with local brands.  They also want to be available in 3 countries by the end of the year.

As their core target market is 18-35 A & B social class, their mainly Western inspired designs are perfect for the local market.  On the international stage however where such designs are commonplace, they might need to introduce more ethnic designs, or at least more designs that at least look Egyptian to differentiate themselves.  But both founders know they have to take things one step at a time, especially with the changes Egypt has been through in the last year.

Saying this has been a labour of love might be stretching things, but Mohamed is definitely proud of the journey so far, “seeing it all come to life, a creation of yours is always the most cherished thing to a human being.”  I for one hope they continue to grow and get the reach they deserve, as Egypt is long overdue a cotton brand it can be proud of.