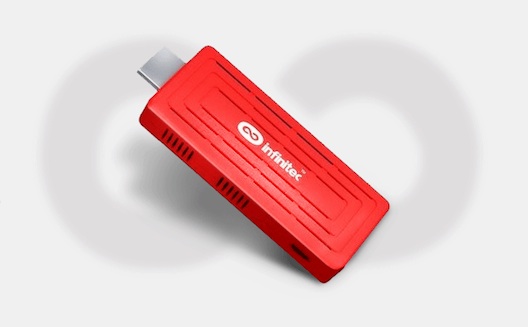 "It's hard to be a tech entrepreneur in the Middle East," says Ahmad Zahran of Infinitec.

Yet by shutting down his previous company, getting rid of expensive Dubai office space, and building on the cheap, Zahran has built one of the coolest- and tiniest- hardware products to come out of the region this year- or decade?

Pocket TV, a USB-sized drive that transforms any TV into a Smart TV, or an oversized tablet. The device plugs into a TV's HDMI port and offers a full HD interface that allows you to browse the internet, stream videos through Netflix, playback media stored on its 1GB harddrive, and also, thanks to running Android 4.0 Ice Cream Sandwich, it allows you to operate any Google apps that you want in the Google Play app market.

Because standard TVs don't offer a touch screen, the Pocket TV comes with a supplementary remote control that's just as flexible- the "Air Remote" offers a full QWERTY keyboard as well as a gyroscopic sensor that allows it to operate like a Wii, moving the cursor in sync with your hand movements in space. For the uber-minimalist, the Pocket TV also works with the Google Remote TV app, so users can use their smartphones as a remote control.

What does that mean for an entrepreneur? Not only can you play back movies and songs of your choice, but you can effectively transform a hotel TV into a personal tablet, editing presentations, working on documents, and conducting calls over Skype- without a laptop. How well this works for you will depend on the QWERTY keyboard- and whether you're on Android.

It's an innovation that has already been lauded by many tech sites in the U.S., and Zahran (not to be confused with the other excellent Ahmad Zahran, of Egypt's KarmSolar) is aiming to deploy the device first in North American and European markets. But when it comes to developing the product in the Arab World, Zahran says he simply couldn't get traction with investors.

"Entrepreneurs are at the bottom of the totem pole, and hardware entrepreneurs are below that," when it comes to investment, he says. While U.S. investors told him they preferred U.S.-based companies, investors in the region, says Zahran, simply didn't understand the product or were hesitant to jump onboard before seeing sales.

So he put the project on Kickstarter. Aiming for a goal of $100,000, that would allow him to launch a first run, Pocket TV today has secured over $335,000, with 11 days to go. Zahran is now in talks with "25 different distributors" to distribute the product globally.

The only market he's not targeting is the Middle East. His previous USB-size product, the Infinite USB Memory Drive, allowed users to store an "infinite" amount of data by connecting to server space in the cloud. It also allowed users to seamlessly share data between harddrives over WiFi.  After he pioneered the device three and a half years ago, spending $500K to set up in Dubai, he discovered that 98% of his market was outside the Middle East. Yet North America and Europe were thirsty for the "mind-blowing" device.

The end result is that Zahran is frustrated with the Arab World. Having grown up in Spain, of Palestinian origin, he wanted to build in the region and sell to the region. "I think when it comes to technology, we like to see what's working in the U.S. and the West, but we are not the people who like to consume at the bleeding edge."

Ultimately he may have to go the long way around, garnering investment and sales outside in order to prove the product's value to his home market.

In the meantime, Pocket TV is going strong on Kickstarter; demos below.