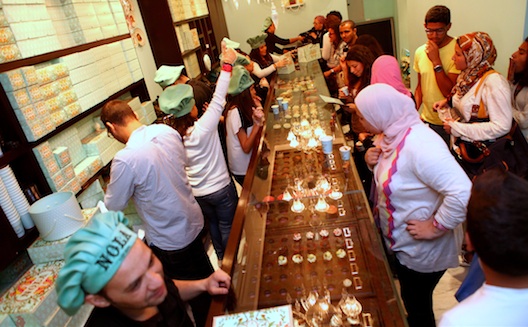 Laila Sedky has achieved a lot so far for a 25-year old. By founding NOLA cupcakes just before the Egyptian revolution, she’s managed to start and grow a company in an unstable social and political context, establish high standards in her sector, and trigger an industry that could feed Egypt's craving for cupcakes.

She has lived almost her entire life outside of her country, studying finance in Montreal. Initially, she wanted to follow in the footsteps of her family, most of whom work abroad in finance, yet she chose a different path, having always dreamed of come back to build her own food shop. In old Montreal’s restaurants and boutique shops, she discovered a passion for food, along with the sharing and warmth that cooking delivers. This passion drove her to come back to Egypt and fight for what she cares about.

In Egypt, Laila noticed that homemade cupcakes were rising in popularity on Facebook, but weren’t being sold in actual shops. The creativity and taste of existing cupcakes did not match their expense, and the increasing demand was not satisfied. Enter Nola Cupcakes.

Sedky decided to create NOLA as a specialized cupcake shop, to stand out from its direct competitors, including Crumbs, which offers cupcakes among other varieties of desserts and breads. She took cooking classes for a year in order to train a team of chefs, who worked to develop the perfect recipe. NOLA now offers nine cupcake collections to suit a variety of tastes, varying from very traditional vanilla cupcakes to unexpected exciting flavors like date and pistachio. Sedky's dedication shows; the creamy texture of the different icings and the smoothness of the cupcakes themsleves make them rich and mouthwatering.

She also built NOLA as a family business from its very beginning, building it along with her brother Adel Sedky, who she shares a vision with. “To make a family business work, we have to keep our shared objective in our sights. We do not take business home, and we know when to disconnect, but we always try to complete each others’ weaknesses rather than trying to make each other cover everything.”

NOLA’s team is small, with a total of four people, which allows agility, says Sedky. “We’re very young and we’re very modern, a combination that we were not afraid to try out.”

It’s clear that Sedky has also worked to know and accurately target her customer base. “It’s all about the location,” she says. “I chose to be in the heart of Zamalek in a very prime spot. Although the expenses are very high, it’s the hub of Central Cairo.” She believes that location is key for start-ups, so that they can be recognized and noticed. NOLA also uses a friendly marketing approach on social media to reach out to customers around the city, showcasing visitors, sponsoring local events, even encouraging customers to taste new flavors with “Cupcake War” events.

Launching During a Revolution

Sedky developed the concept for NOLA for a year, and then launched in December 2010, one month before the Egyptian revolution began, yet it has not stopped her. “The process was not easy, and it was my first job, but I was very blessed that I was surrounded with people who offered me a helping hand for no reason. At the same time, there were other factors that made it sometimes difficult,” she says.

It was her first job; Sedky has known no other business but running NOLA during a revolution. Most of her customerbase built during and post the revolution, yet the challenges she faced were far from being simple to overcome, as she faced the bureaucracy of the Egyptian system, the complexity of getting governmental permissions and approvals, and the hardship of dealing with attorneys and contractors. Yet the positivity of NOLA customers helped the shop overcome those struggles.

The Sedky siblings are ambitious about the idea; after opening 3 shops in Egypt, they aim to take NOLA global and get international recognition as an Egyptian brand, not just in the MENA region.

However, Laila remains highly optimistic about Egypt, as she sees more potential here than anywhere else. In her optimism and passion, reflected in the NOLA brand, I saw an entrepreneurial spirit that never took NO for an answer, never gave up, treated the sky as the limit, and followed passion with true commitment. This is the spirit that can grow through a revolution and usher in a new era.